I‘m currently playing the 3rd Movement of Moonlight Sonata and noticed myself always hitting the last note in Measure 22 (f##) even though it is a tied note. I never thought about not playing it, because every performer I have seen/heard playing this piece always played this note as well. Thus my ears were used to hear it and so I automatically played it without thinking. Now the question is, how am I supposed to know when to play the tie, and when to actually play the note, even though the notation tells me not to do it.

There is actually an indication in Measure 23 which tells me to use the thumb to play the g#, therefore one could conclude, that the note has to be played even though it is tied. Any ideas on this? Or am I missing something here? 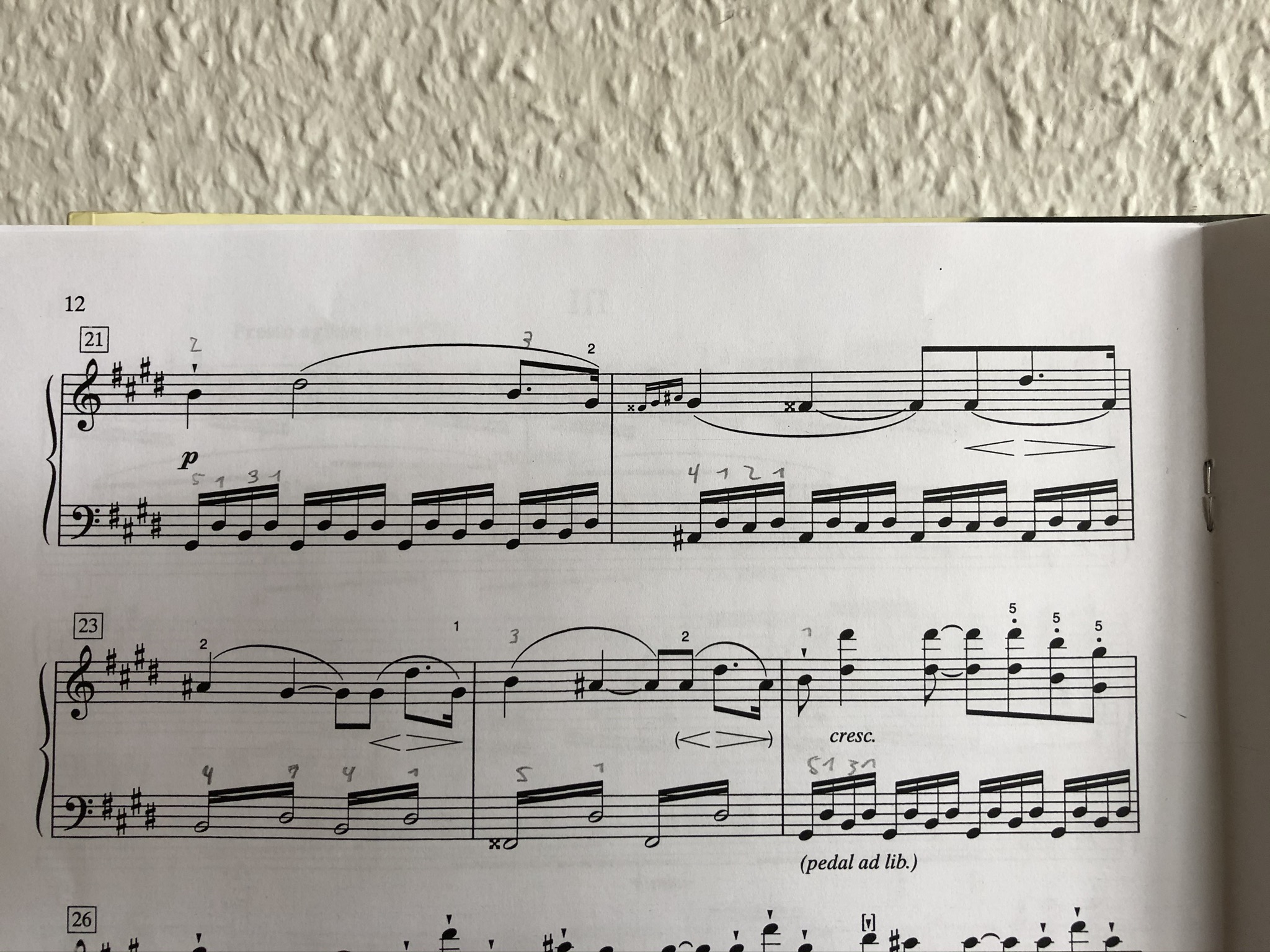 It seems that you may be conflating phrasing slurs with ties.

Ties and slurs are notated similarly, but the context determines what is intended. Ties in this style will only ever connect two of the exact same notes, and there will not be any intervening pitches; instead, the tie's purpose is to lengthen the duration of a pitch you are currently playing. This happens in the first half of m. 22; on beat 2, the F-doublesharp is tied into beat 3!

A phrasing slur, however, will often connect multiple different pitches, including perhaps multiple instances of a single pitch. That is what is happening at the end of m. 22. During beats 3 and 4, those two F-doublesharps are not tied together, but are rather part of a larger phrasing slur. As such, you will articulate both of those F-doublesharps.

In the instance that you would want to hold the F-doublesharp for the duration of this slur, you would need to use separate voices, like so:

(This looks a little ugly, but mainly that's because it's a manufactured example. Beethoven would have written this differently had he wanted the F-doublesharp held.)

I never thought about not playing it, because every performer I have seen/heared playing this piece always played this note as well.

As you say in your comment to Tim both figures are identical: and also in the next bar 24 we have the same motif.

It’s both bars. Same pattern at the end.

Now the question is, how am I supposed to know when to play the tie, and when to actually play the note, even though the notation tells me not to do it.

The notation doesn't tell you not to play the last notes. There are no ties in the second motif.

As you can see in the previous motif (2 tied notes F##) the ties are always between two consecutive notes and not from the beginning to the end of a phrase or a motif. The latter bows are slurs to mark the phrasing: This means play the notes under one bow, with no stop, in one breath, but at the end of the slur there is a breathing. The last note under the slur is played softly and shortened. Look at the performer: the pianist lifts the hands at the end of the slur.