Polyrhythmic clash, how to get rid of the rhythmic dissonance without losing the polyrhythm?

So I'm midway through composing a movement of a suite I am working on and I have reached this section that is primarily triplets. It starts off as a solo violin, and then later, more instruments are slowly added back in. I felt the need for rhythmic variety, so what do I do when I have triplets as the primary rhythm? In this case, I went for the polyrhythm option. Polyrhythm has worked for me before to bring rhythmic interest. However, something happened that I did not expect. The rhythms clashed noticeably. I knew rhythmic dissonance was a thing, but that has never occurred in my own works until now. Here is an excerpt that includes the polyrhythm: 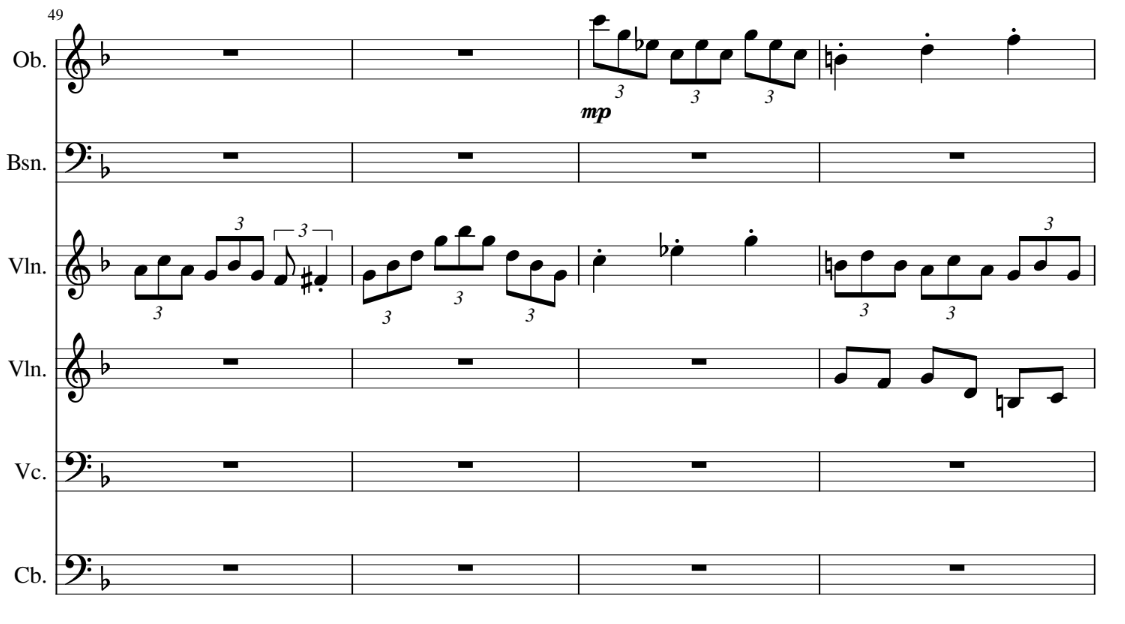 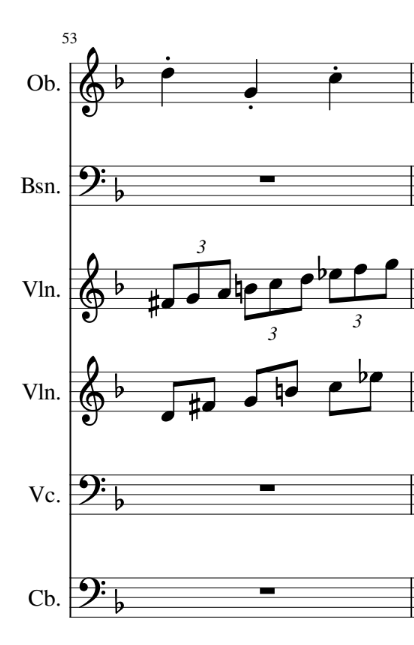 By the way, this passage here starts in G minor and modulates to C minor briefly. Considering that the movement as a whole is in D minor, that's not too surprising. And it can't be the harmony that is making it clash, since outside of a few non-chord tones, all the voices are consonant with each other. That's why I'm thinking that it is the rhythm that is making it clash. However, as I stated before, I have never had rhythmic dissonance happen with polyrhythms before(and that is both for 2:3 and 4:3 polyrhythms).

Here is an example of a piece where I use polyrhythms and don't get this rhythmic dissonance:

But it isn't just piano solo for which I have gotten polyrhythms to not be rhythmically dissonant, I have done that for chamber works too. And I have never used polyrhythms outside of x:3 because if triplets are the primary rhythm, rhythmic dissonance is less likely to occur than with say quintuplets as the primary rhythm. And before you say that it is probably the tempo, the tempo that this movement is at is quarter note = 100 BPM, which again, I have wrote polyrhythms at that exact tempo that aren't rhythmically dissonant, so that's ruled out. In fact, I find that the moderate range is where polyrhythm is at its best. Too slow and it might as well be polymeter instead of polyrhythm. Too fast and it might as well be a single rhythm that is very embellished.

I suspect the dissonance that you hear is due to the half-step and whole-step intervals between the two violin parts. Because of the polyrhythmic timing, these harmonic clashes are being emphasized. If these half-step intervals were played on the two violins simultaneously, it might sound more intentional. But the staggering can make it sound like a mistake rather than a conscious choice, and delaying the dissonant harmony calls attention to it rather than letting it meld with the melody line.

The half-step intervals are especially dissonant, and they're likely causing what you hear. Something you can try is this: change the bottom violin line to something like: D-C-G-E-C-A. The line will be alternating between a rise and a fall, which may not be what you are looking for, but if it sounds less dissonant to your ear, then it confirms the ideas I've written here.

Not the answer you're looking for? Browse other questions tagged composition polyrhythm or ask your own question.

8
Learn music with odd rhythms
2
How do 'meter' and 'rhythm' affect the choice of 'Polymeter' and 'Polyrhythm'?
1
Accelerando in poly-tempo
9
Unifying/Formalizing the ideas of cross-rhythm, polyrhythm and hypermeter
1
Close transposition but want to avoid dissonance
1
How to make sustained polyrhythms easier to play?
6
How would you derive accurate tempos if you have a clock with a second hand but no metronome?
0
Technical analysis of rhythm in Sofi Needs a Ladder