I'm learning modal jazz harmony for the first time, and I am confused why the character tone of D Dorian is B and not F. I can see the difference between Dorian and Aeolian is in the 6th degree. But the difference between Dorian and Mixolydian is the ♭3. If we look at the modes of one key, e.g. C, and arrange the modes in order of increasing number of flats (i.e. Ionian, Mixo, Dor, Aeol, Phryg, Loc) then the character tones move by fourths except for Dorian: F, B♭, A, A♭, D♭, G♭. Surely it should be E♭?? I can see that Lydian doesn't fit into this pattern... but ♯4 obviously is the character tone of Lydian, so obviously the fourths thing is not that important. 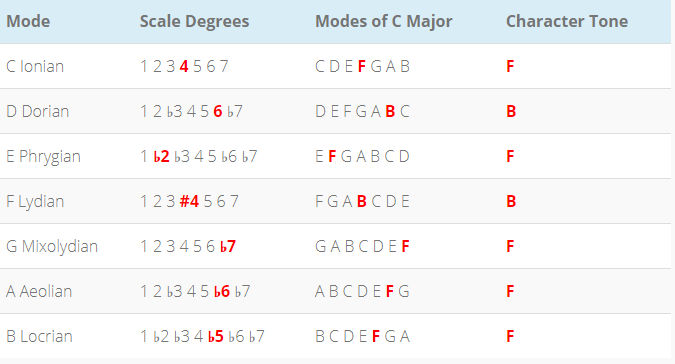 You don't have to force yourself in finding patterns you won't need.

I would keep it simple, and split the modes between minor and minor, based on their 3rd degree. Let's keep locrian aside for a moment (even though I consider it more minor than major, practically speaking).

You can keep ionian and aeolian as reference, as you know how they sound, and which harmony you can build with them.

For the remaining for, ask yourself what makes them differ from the reference, and you already know the answer.

The question now is, on top of what am I playing? If there is a passage in D dorian, chances are that I will be playing over a Dm/G or Dm/Em sequence. Both feature a B natural, that you want to outline in the melody. The B♭ of regular aeolian would have clashed with the B.

Besides this, make some music! Nobody is going to ask you to declamate the character tones of the modes in order. Check for yourself what makes a certain mode different from the others, both in terms of harmony and melody. Listen to modal music. Write modal music. Iterate.

Character tones are those that most easily give away the character or harmonic nature of the mode.

If your tonic i.e. home note is D, and if that's the only note that's played, it does not taste like any mode. No third is played, so you don't even know if it's minor or major. You are free to imagine any kind of harmony around the D.

If in addition to the D (in the bass), you play an F, it starts to sound like a minor something. From the mode palette you can play D Dorian, D Phrygian, D Aeolian or D Locrian over D=tonic and F, and it would suit the D+F combination. Dorian, Phrygian, Aeolian or Locrian are minor modes, because their third is a minor third, "b3".

If in addition to the D and F, you play a B, from the mode palette the only alternative left is D Dorian, because that's the only minor mode that has minor third and a major sixth. The other minor modes have "b6" in the table.

Why the primary character tone in D Dorian is B and not F ... well, I would say that both F and B are what define the harmonic character, but maybe it is assumed that when you compare D Dorian to a normal D minor key and D natural minor scale, then it's the B you play if you want to tell other musicians I WANT DORIAN HERE.

The difference between D Dorian and D Mixolydian is not only the b3, it's the third and the sixth. Dorian is a minor mode, Mixolydian is a major mode. The character chords for D Mixolydian are D major and C major, D being the home note. Play the chords D and C/D (D in the bass), and repeat those two chords --> a pretty much instant D Mixolydian feeling is created.

They thought the music could be better, so they hired a bassist who made a new arrangement of the tune by playing C. They called this Le Ionian Djãêz:

A new variation was created by putting D in the bass, called Le Dorian Djãêz:

A in the bass, Le Aeolian Djãêz:

Your misgivings about that chart of 'character tones' are well founded IMO.

The 'character tone' idea in the chart is a bit arbitrary.

The sixth degree of Dorian is the unique tone when compared with Aeolian. But not when compared to any other mode that used a minor tetrachord for the top part of the scale: Mixolydian and Phrygian.

When comparing to Mixolydian the third degree is the unique degree.

When comparing to Phrygian the second degree is the unique degree.

There are only two truly unique scale degrees within the diatonic modes: the raised fourth degree of Lydian and the lowered fifth degree of Locrian.

The lowered second degree comes next as fairly unique, because it is only found in Phrygian and Locrian. Traditionally Locrian is not used as a mode for composition so for all practical purposes the lowered second can be though of as unique to Phrygian.

If you eliminate Lydian, Locrian, and Phrygian for having truly unique degrees, that only leaves two pairs of modes: Ionian and Mixolydian for major where the seventh degree distinguishes them, and Aeolian and Dorian for minor where the sixth degree distinguishes them. However, it should be clear that merely the seventh and sixth degrees alone won't distinguish the mode. You at least need the third degree to know whether it's a major or minor family mode.

You really need to look at all tones to know what the mode is.

Yet another way to think about modes is combinations of tetrachords. There are four basic types: major, minor, phrygian, and harmonic. Ex, Dorian mode is two dorian tetrachords, one starting on the tonic, the second starting a perfect fifth above.

Keep in mind you can have modes that aren't diatonic like the double harmonic or Freygish scales.

Simple answer: Most probably whoever said that B is the character tone of D dorian, meant "B is the note that distinguishes D dorian from D aeolian", i.e. the other most commonly used minor mode. D aeolian, aka D natural minor, has a Bb instead of a B, while all other notes are the same as D dorian.

Not the answer you're looking for? Browse other questions tagged jazz modal or ask your own question.

5
How to recognize the modal scale starting from the chord?
3
Why Locrian #2?
3
Which chords belong to a mode?
3
Is the melodic minor scale use as the basis of chord progressions in modern jazz?
5
Melodic minor and the ii chord
6
Are modes in jazz primarily a melody thing?
1
Are circle of fifths progressions generally practical for modes?
4
In what way is music considered to be in a mode when accidentals seemingly contradict the mode?
8
How to apply Barry Harris 6th diminished voicings and maintain chord functions?
3
Does melodic minor ever function as a key (or tonality) in of itself?