When using the following sound airship rising I hear a tapping noise, which I am sure is not part of the synth sound, at the audio peaks (I don't hear at lower volumes) and I think it's something to do with the speakers are resident frequency can anyone else recommend how I can stop this.

I hear it both from laptop speakers and headphones.

I am unable to upload the sound here, maybe someone can test? It really sounds like a bug with airship rising synth, as I have MBP 16" with quality speakers, or maybe its my layer effects.

Edit, I noticed when you turn the SINE down this tapping disappears 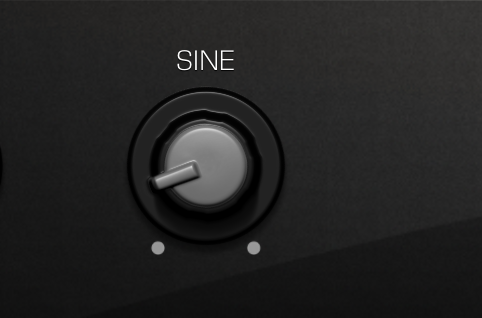 I opened up GarageBand 10.3.4 and played around with the Airship Rising software instrument. I can clearly hear a “tapping” sound as you describe, but I believe it is an intentional part of the sound.

This sort of sound is characteristic of what an analog synthesizer user would call a “filter ping”: any resonant filter, if it receives a sharp edge on its input (imagine a very low frequency square wave), will “ring” briefly, producing a sine wave at the resonant frequency after the initial “strike”, very much like a percussion instrument. The “tapping” noise you are hearing is the strike itself, just like you would hear a mallet or drumstick hit. The SINE knob is just controlling the mix of that part of the sound with the rest.

In this case, the filter/oscillator/resonator (whatever you want to call it; all are reasonable names depending on context) that produces the tap and sine tone is not the same thing as the filter which is filtering the other part of the sound, which has direct CUTOFF and RESONANCE controls. You can hear, if you turn up the RESONANCE, that that filter is being modulated (downward sweep of pitch) with each note, whereas the sine tone is stable. But in another synth being played this way by changing the controls or patching, there might be only one filter unit which can be either used as a conventional filter (having sound input from an oscillator) or pinged (having only the “ping” signal going in).

Not the answer you're looking for? Browse other questions tagged synthesizer garage-band or ask your own question.

2
How to access the "Airship Rising" synthesizer/mode in GarageBand iOS (iPhone)?

5
Finger picking styles used in garage band app
5
Do I need to be concerned with drum tuning when using drum samples?
0
Garage Band: how to have a drummer play only a steady snare drum on all the eighth notes?
4
Garage band: how to add marks to tracks?
5
Edit decay of hi hat on garage band
2
Changeover from Garage Band to Logic Pro
0
Understanding key signature in garage band
0
Basic editing a piano score in garage band