Why is a doubling of frequency called an octave?

I understand that when two frequencies have a ratio of 2^n:1 for any natural number n, they are said to be n octaves apart. Moreover, they sound "essentially the same" to our ear. However, why do we split an octave into eight notes in the first place? Consider two frequencies of 220 Hz and 440 Hz. How do musical systems select frequencies between these limits in a suitable manner?

On a related note, I sort of understand why the chromatic scale divides the range between 220 Hz and 440 Hz into 12 equal parts. This was nicely explained in this video and has to do with the fact that the twelfth roots of two are very close to rational numbers p/q for small p and q.

I do not understand where the octave (specifically, the number 8) fits into this picture. I am not a musician so if possibe, please define musical terms in terms of physics e.g. frequencies and harmonics.

Note: The answers here did not answer my question. The question is why 8 notes similar to how there exists an answer for why the chromatic scale has 12 intervals per octave.

First, let's be clear that the standard (major) musical scale divides the octave into seven parts, not eight. The word "octave" comes from eight, because a unison (two notes sounding at the same frequency) is considered to be a "prime" or kind of a "one" in the system, rather than zero. Thus, the first interval created between a note and the next note above it is called a "second," even though it's only one interval.

This is just a historical convention for naming musical intervals, which sort of originated by counting both endpoints in an interval. For example, a musical "fifth" (frequency ratio 3:2) is the interval created by two notes that are four steps apart. So, C-D-E-F-G creates a fifth between C and G. The interval is five notes, but there are only four "steps" (of various sizes).

Anyhow, you need to get past that quirky numbering system first. So, I believe your question then becomes: why do we divide the octave into seven parts?

There are many longer answers here on this topic. But the gist is that like the octave (frequency ratio 2:1), small whole-number ratios of frequencies are often heard as "consonant." So the ratio 3:2 between frequencies sounds good (and, as noted, creates an interval called a perfect fifth), as well as the ratio 4:3 (the so-called perfect fourth).

The ancient Pythagoreans recognized the importance of these intervals (2:1 octave, 3:2 perfect fifth, and 4:3 perfect fourth). They also recognized that the difference between the size of the 3:2 and 4:3 ratios was useful, an interval with a frequency ratio of 9:8, which eventually became known as a "whole step."

So far, if you combine these ratios within one octave, you can build a perfect fifth and fourth up from the bottom note, as well as a perfect fifth and fourth down from the top note. The meet in the middle around a 9:8 "whole step." In musical notes, this would for example outline the notes E-A-B-E within an octave. (As I noted in comments, this overall can be thought of as a 12:9:8:6 ratio between four notes, which was how the Pythagoreans thought of it.)

Again, all of this dates to ancient Greece and is built on fundamental consonant intervals/ratios. The question then is how to fill out the rest of the notes within that octave. And the Greeks had a lot of answers to that, with a lot of different tuning systems.

But one possibility that they settled on was called a "diatonic" system, which literally means "through whole tones" (i.e., those 9:8 ratios I mentioned). They took that interval that originated as a difference between the 3:2 fifth and the 4:3 fourth and started tuning 9:8 "whole steps" to create a scale, starting at the top.

In musical terms, this was like going E-D-C down the scale. But they had already built B and A after that. So then once they got to A, they built more whole tones going down A-G-F. Then you had a complete scale going down an octave: E-D-C-B-A-G-F-E. Most of the intervals were those 9:8 "whole tones." But a couple (C-B and F-E) were smaller intervals with really odd mathematical ratios. In effect, the Greeks didn't care about those ratios so much: they just cared about tuning the other notes, and those left over small bits were kind of like the "errors" that were left over in tuning.

What you then have is seven intervals within an octave creating the diatonic scale, which survives to the present day.

As to how this relates to the 12-note chromatic scale -- well, some Greeks (particularly a guy named Aristoxenus) realized that those little left over bits in the scale were about the size of intervals that could almost divide the octave into 12 equal bits. They were a little bit off, though. Similarly, those little bits were roughly one half the size of the 9:8 whole tone interval.

Over the centuries once harmony developed more, there were various reasons that the 12-note chromatic equal division seemed to be better than the one constructed with the simple 3:2, 4:3, and 9:8 ratios. That's a much more complex story (the story of musical temperament).

But hopefully this explains the gist of why a 7-interval division of the "octave" developed historically.

The name "octave" comes from eight notes. (Like using "ocho días" as well as semana to mean week in Spanish.) Sometimes endpoints are counted. The octave is the eighth note (there are seven different diatonic notes.) Language need not be mathematically consistent. Still, the term "unison" seems more descriptive than "zero" or "nihil" for an interval of two equal notes. Linguistically, the term "unity" or "one" or "unison" have been used for centuries (and in different languages) to represent sameness.

If we knew only the pentatonic scale the octave would be probably called the sixth. As the ancient Greeks had a scale of two tetrachords: (tetra = 4, chords = strings and as 2x4=8 it was later been called octava. 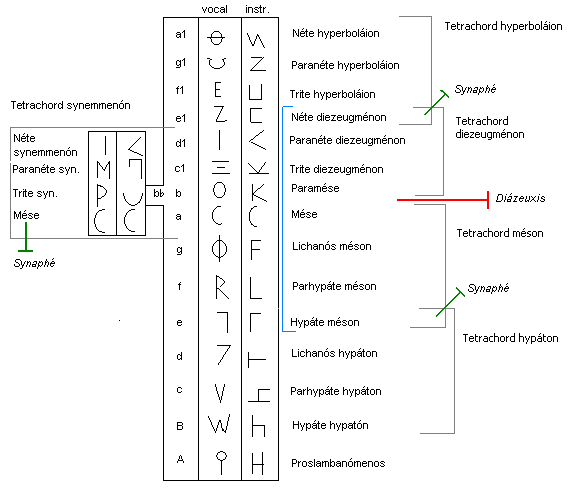 Actually there where 7 steps and the eighth degree was identical with the first. The system was constructed that the degrees found place between the lengths of a string and it's half length (which was identified as the same sound - but higher: this could have been 12, or even 32 because the Greek also knew 1/4 tones.)

Why 7 and not 5? or 9? or 12? or 32? or any other combination of tones and semitones? why is a tone a tone and a semitone is what it is? you can continue the questioning and researching.

I always thinks there are two reasons:

In classical antiquity, the seven classical planets were (are) the seven moving astronomical objects in the sky visible to the naked eye: the Moon, Mercury, Venus, the Sun, Mars, Jupiter, and Saturn. The word planet comes from two related Greek words, πλάνης planēs (whence πλάνητες ἀστέρες planētes asteres "wandering stars, planets") and πλανήτης planētēs, both with the original meaning of "wanderer", expressing the fact that these objects move across the celestial sphere relative to the fixed stars.1[2] Greek astronomers such as Geminus[3] and Ptolemy[4] often divided the seven planets into the Sun, the Moon, and the five planets.

But what was first? the seven planets or the seven degrees? or the seven weekdays -> Week= Hebdomas (griech. εβδομάς): Sun-day, Moon-day, Mars-day, Mercur-day, Jupiter-day, Venus-day Satur-day, the other names are derived from German Gods

What was first: the 12 months or the 12 semitones between the repetition of a similar sound?

And the question should be: why has the division of a string length (or tube, or iron hammer (aerophones and idiophones) and its half length respectively half weight organized in seven intervals like it is - so that the repetition of the identical sound-impression is exactly an octave (an interval of eight degrees built by the seven other intervals, which have been derived from the overtone series and the rations of the string division.)

I think the answer to this question will be one of the seven world wonders ... hem, I mean the eighth.

People found that using frequency ratios based on small integers (3/2, 4/3, 5/3 ...) produced pleasing results. They put these notes together and came up with a seven note scale that sounded good. The eighth note they called the 'octave'.

Lol, I can't use mathjax over here, as I would have if answering on Physics SE. But the answers here may have more musical background.

The chromatic scale is used because particular powers of 21/12 are very close to the ideal whole number ratios. We have

For the purpose here, very close means that the combined frequencies (as in a chord) produce a slowly varying wave pattern, rather than a chaotic pattern heard as a dischord. No scale produces perfect combinations for all notes, but the chromatic scale maintains the same relationships whichever note one takes as the first "doh", which is important to music, but also imperfections to any scale are important because they help to convey mood.

The "white notes" C–D–E–F–G–A–B from the chromatic scale form the diatonic scale (seven notes + 1 for the octave), which can also be obtained from a sequence of perfect fifths

The real reason for adopting the chromatic scale has to due with instruments with fixed tuning, like the piano. Many other scales have been used, with different numbers of notes. Wikipedia lists:

Chromatic, or dodecatonic (12 notes per octave)

Heptatonic (7 notes per octave): the most common modern Western scale

Monotonic (1 note): limited use in liturgy, and for effect in modern art music

Not the answer you're looking for? Browse other questions tagged terminology intervals or ask your own question.

127
Why are there twelve notes in an octave?
46
Why does the scale have seven (or five) notes? Why not six?
64
Why is C the base note of standard notation and keys?
7
Why Seven Principal Tones?

6
Word for part of a beat
11
What is the most common way to refer to a particular note in the chromatic scale without making any implications as regards tonality?
6
How does 'meter' differ from 'rhythm' in music?
23
Etymology of word "Octave"
4
How does any given major key contain only 1 tritone?
19
Exactly what does "diatonic" mean?
7
Why is 3/4 called "simple triple" if we can divided the beats by more than 2?
9
What is the origin and original meaning of "tonic", "supertonic", "mediant", etc.?
4
What is the generalized terminology for continuous changes?