What chord is this, is it quartal, and what's the theoretical mechanism that allows it to sound this way?

In "Figure it Out" by Allen Stone, at approximately the 1:35 mark (link), the pianist plays a chord that sounds very much like quartal harmony and/or something Herbie Hancock or Bill Evans might play. (I'm trying to identify it by ear instead of analyzing the key of the song and the actual notes because I'm trying to understand the harmonic function of quartal harmony and how to identify it by ear.)

(It sounds quartal both because of its color, and because it's got a Bill Evans vibe.)

I also notice it's played over the tonic, and it seems to resolve back to the tonic by chromatic motion.

My question is both, is this chord considered quartal, and how might you systematically identify when this chord would theoretically be appropriate? (I say "theoretically" because it may not always sound "good", but is there some heuristic like, if you borrow this chord from a related key while the underlying harmony doesn't change, etc....)

It could be a stack of fourths and an E on top: E - A - D - G - C - E. Try it with your left hand playing E - A - D and right hand G - C - E. It's basically very briefly bringing in stuff from E minor, being mostly in E major key. Not sure if the pianist on the video plays the low E notes, but they make the sound fuller and the trick more clearly understood if you're just playing piano without other instruments: 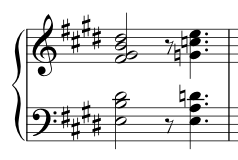 If you want to try a "for dummies" version of the same trick, you would play an E major chord and then an A minor for a bit. The more complicated E - A - D - G - C - E stack just adds flavor and explicates more simultaneous notes from the E (natural) minor scale.

Switching, or "modal interchange" between parallel major and minor keys is a stock trick in jazzy music. Song goes E - C#m - F#m - B, but then you switch to or overlay Am - C - D ... etc. Soloing E minor pentatonic over E major key is a variation of the same theme.

If modal interchange is a trick that you can do with even something simple like E - Am - E, a stack of fourths is a separate trick in and of itself. For example, let's take this rootless C dominant chord (which is jazzy and bluesy even as is)

We can jazz it up even more by stacking fourths:

As another example, the Dm7 chord from Miles Davis's So What isn't the same without the G in a stack of fourths in the bottom. The voicing is part of the sound, even though the same note in another octave might give you an equivalent idea of a scale. Try it and move the G an octave or two higher. Similar, but different.

IMO you don't need to know the mechanisms behind this. Nobody really knows the mechanisms. There are just different ways to describe the things that are played, different perspectives and styles to reason about the note combinations and how they affect the feeling and harmonic possibilities. You need to have some kind of a mental map of where you are: how to reproduce the trick, how to locate the right notes, and how the trick changes the harmonic environment (scale, chords and tonic probabilities) you have in your mind. For example, one way to see the major/minor switch is moving three semitones up or down. A guitarist might reason about it that way. A pianist might have different ways, but the only thing that matters is that you're able to perform and use the trick in a somewhat controlled way. People learn and use very complicated languages without having the slightest idea of the "mechanisms" behind them!

To really learn a language, you try and use it in a context. Order a pizza and a coke or something, repeat a sentence. Mimic, repeat. To learn musical things like modal interchange and to add them to your bag of tricks, use the tricks in all kinds of songs. Try it in any song that's in a major key, and bring in stuff from the parallel minor! And the other trick that's simultaneously employed, the stack of fourths, try that too. Layer a stack of fourths in all kinds of songs and all keys, to learn what it tastes like.

Oh, is it "quartal" harmony? https://en.wikipedia.org/wiki/Quartal_and_quintal_harmony If a song has one chord with many notes from a scale, but with a voicing that's in fourths instead of thirds or a dense cluster, I guess you could call it quartal. But I think at least half of the point in this particular example is to bring in things from the parallel minor, and doing it with a stack of fourths instead of, say, thirds, is a separate aspect.

The song is in the key of E. The first verse starts with Emaj7, but in the second verse the pianist interrupts it with passing C chord (or perhaps C triad is an upper structure of Am7 or Fmaj7?, I'm not 100% sure). It is a chord borrowed (via modal interchange) from the minor subdominant key of Am.

The bass doesn't follow piano and simply plays B note, but this doesn't seem to matter for a passing chord.

Note that minor subdominant appears in the other parts of the song as well.

Not the answer you're looking for? Browse other questions tagged theory quartal-harmony or ask your own question.

7
“Andalusian cadences”: How are they commonly heard?
4
The melody+chords pattern in perspective
2
Chord progression template
0
Where To Start With Contemporary Theory
12
Why does the dominant lead to the tonic?
0
Modal Chord Families
2
How do I harmonize a C major scale in fourths and then apply negative/mirror harmony?
3
Rationalizing this chord progression (I7-iii-IV)
7
“Push chord”. What's that?
0
Naming and analyzing chords : problem with a stack of fourths (and 2 other slash chords)