I am beginner guitar player and today after I replaced the strings and adjusted the Floyd Rose bridge of my guitar (BC Rich Gunslinger retro) I noticed that the action was increasingly high, from fret one to fret 22.

I understand from the picture below that the neck, depending of the applied tension strings vs. truss rod can have three shapes: 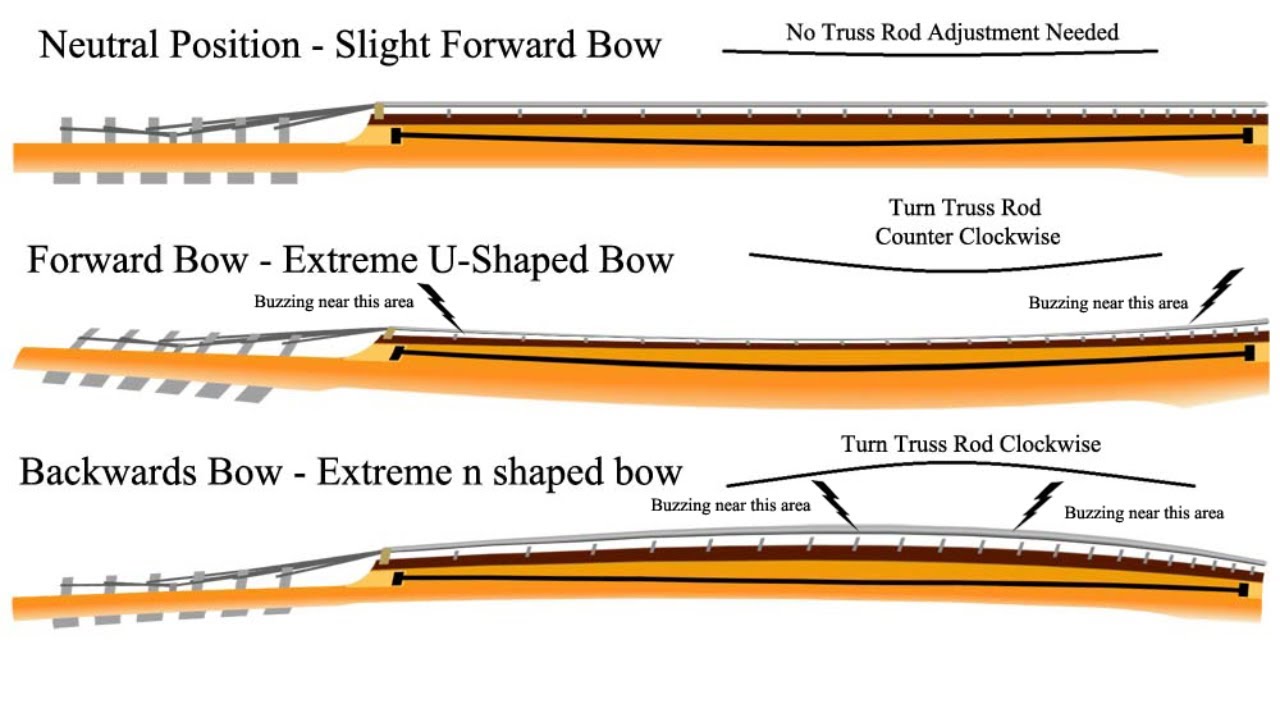 Though I am only having buzz on frets 1-3 (maximum) and the action only increases moving up the fretboard. So I imagine that the solution would be to lower the extremity of the neck where the headstock is.

I see the truss rod as a device to counter the tension on the strings. So intuitively I would imagine that I need to tighten the truss rod (turn clockwise) in order to lower the headstock extremity of the neck. Though I guess the picture above says the opposite.

So in summary: I am having a slight buzz on frets 1-3 and the action is only increasing as I go up the fretboard. Shall I tighten or loose the truss rod?

Just as Victor pointed out, that picture has it backwards. My suggestion is to play the guitar for a few more days, then consider slightly loosening the truss rod (turn it counter-clockwise 1/6th of a turn) and see if that fixes the buzz. If the action at the middle of the neck is uncomfortably high, you've gone too far.

I would like to point out that it is normal for the action to gradually increase as you go up the neck. Because the frets are further apart lower down the neck, the string has more 'lenght' to clear the next fret and avoid buzzing. While you could set up a guitar to have the same action at every fret, this is not desirable because the action at the lower frets could be much lower.

After a certain point, adjusting the truss rod is more about feel than avoiding buzz. For example, if I feel the action on my guitar is higher than it was a few days ago, I tighten the truss rod (turn it clockwise) because the wood has likely exapnded due to temperature & humidity changes.

nother point I'd like to bring up is that changing to different gauge strings usually requires changing the entire setup. In general, going to heavier strings will require you to tigten the trussrod in order to counteract the higher string tension. However, if you are down-tuning, that doesn't apply.

I believe that image is backwards. A U shape means the strings are taking control and the rod is loose. An N shape means you went too far.

I would watch this video for more detail:

That shows you how to adjust and test the truss rod.

Not the answer you're looking for? Browse other questions tagged setup bridge truss-rod or ask your own question.

5
Guitar intonation issue - still sharp but screw as far as it'll go
0
Fret buzzing after set up
5
When adjusting the neck of an acoustic guitar, what bending might be normal?
5
Truss rod adjustment had no noticable effect
2
How do I know whether I need to adjust my truss rod?
1
Low-fret string buzz
6
Truss Rod Can't Get Any Looser
1
Very difficult to reach truss-rod with provided Allen key
1
String Buzz and Dead Notes on Squier Strat
3
Is my truss rod broken?