Is this cross relationship of the seventh degree in minor key harmony OK for 18th century style?

Some background. The following is from Gjerdingen, Music in the Galant Style, it's a kind of harmonic sequence called a monte. I'm using it for a model... 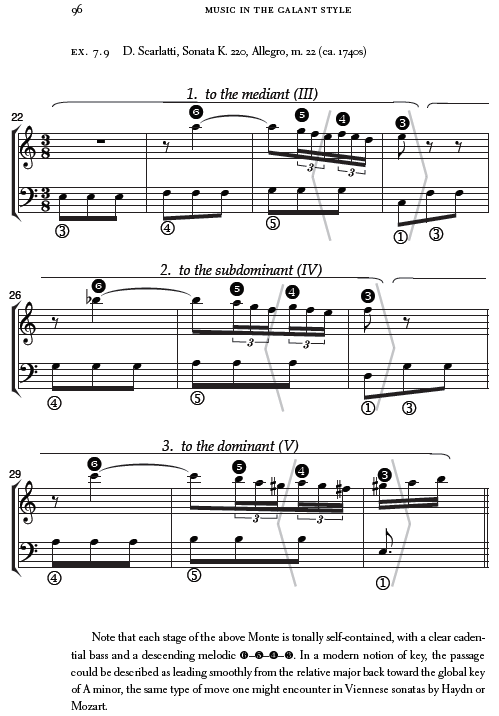 ...to make a piano drill using full octave scales. The basic harmonic outline is followed by the elaboration with scales....

The various accidentals used match up with those used in the Scarlatti example, but transposed, except for one point: the cross relationship of the seventh degree circled in red.

Is this OK in 18th century style?

I think the starting and ending points of the line outlining the cross relationship are what nags me.

The example is from Scarlatti who did a lot of crazy harmonic things. So if this cross relationship seems odd, but perhaps OK compared to someone like Scarlatti, that would be a helpful perspective.

I tinkered around to get the lines starting on chord tones and keep chord tones on the beat. I used white noteheads for chord tones in the scales to make it easier to see. In the process the cross relationship on the ends of the scale was eliminated.

I don't necessarily think a cross-relation is a problem in a sequence when separated by an intervening harmony. Modulating sequences happen all the time in 18th-century style where accidentals gradually get added or subtracted as the iterations of the sequences go by. The Monte pattern is no exception.

I think you are right, however, to be sensitive to the fact that these are endpoints in a single octave line. Still, I don't think that's the real issue for me. What seems off to me is the fact that the top of each scale is entering a fourth above the bass, which in 18th-century style would be treated as a dissonance. The issue with the B♭ may be more about its sudden entrance on a dissonance rather than a potential cross-relation.

Of course, dissonances are treated more freely by some composers in the 18th century. And sequences can be used to excuse freer treatment sometimes, where previously consonant notes might appear as dissonances in later iterations. (Though that's not true here.) Also, perhaps one could argue that the B♭ is a sort of "upper neighbor" to the preceding pitch, just transposed up an octave. But I'd hesitate to say this exact sort of thing (with unprepared dissonance) is something Bach (for example) would write.

To me, that dissonance is what makes the notes stand out even more, and what you don't want when listening for potential cross-relations is for notes to stick out. If you somehow found a way around the dissonance or connected it properly to a line around it, there's no doubt to me that something like this wouldn't raise an eyebrow of stricter composers in the 18th century.

I just popped open my copy of Bach's Well-Tempered Clavier Book I, and the first cross relation that spans an emphasized octave occurs I believe in the C-sharp major fugue, 2-3 bars from the end, where an E♯ in the right hand is emphasized by being leapt to, and then the line continues upward to hit a local high point on E♮ on the downbeat. The harmonic context is different of course, but the change in accidental is justified by a harmonic shift (in this case an implied viio/V), akin to the kind of novel leading tone appearance in your example with the B♮.

(Of course, Bach occasionally uses blatant juxtaposed cross-relations in WTC too, as in the C minor fugue, but there he was just trying to show off by doing rather insane things like double counterpoint at the tenth in the midst of a modulating sequence. Just take a look at the wacky accidentals in his Monte-like sequence around bar 17 of the C minor fugue. Maybe I shouldn't hold him up as an exemplar of restraint against cross relations... Honestly, though, this is really an abnormal passage that barely sounds legit in 18th-century style; again, Bach is only doing it to show off advanced counterpoint.)

I'm sure I could probably find a few other examples of such things just in WTC if I looked. (I literally just skimmed 3 fugues.) The cross-relation isn't a problem with proper harmonic support and an intervening harmony. The B♭ sticking out as a random unprepared dissonance could be.

12
Understanding the elements of harmony in "honky-tonk" or ragtime style piano
31
Understanding minor key harmony
4
Tonal harmony: 18th century counterpoint vs. Accessible contemporary harmony and composition
4
Does the harmony change in this part?
2
Should the dominant seventh sonority on the subdominant degree in minor get special attention?
3
In harmony: key or the flow?
5
How to determine the degree to which diminished seventh chords and half-diminished seventh chords belong in major scales?
6
What tone to play for an upper neighbor in jazz?
5
What applications did distant modulations typically have in the 18th century?