I'm new to using Musescore and writing notation, so excuse any ignorance on my part.

For the sake of example, let's say we want to play a C-Major triad in the root position, but we want to express that C and E are held for two beats and the G is held for one. Initially, I would think to do something like this:

When I first saw this, I actually thought it looked a little cleaner. But when I looked up the definition of voices, it said:

A voice is a musical line or part which can have its own rhythm independently of other voices on the same staff.

Then I thought this might be some sort of notation abuse because in some of the sheets I was looking at, it was clear that there was one voice being expressed with two voices.

My question revolves around correct notation and readability. Is it technically correct or incorrect to express one voice using two? Is one more readable than another? Can one be more misleading than another? Does this even matter or should I just stop overthinking things and get back to playing music?

notation musescore ties
Share
Improve this question
asked May 6, 2020 at 4:35

Is it technically correct or incorrect to express one voice using two?

Is one more readable than another?

Can one be more misleading than another?

Does this even matter or should I just stop overthinking things and get back to playing music?

Ankit got it right, I would only like to add another possibility.

For me (as a classical guitarist), putting it into two voices would be the way to go. I would also typeset the G with stem up and the C and E with stems down, like this:

(I like the second bar more. Also sorry for the huge image, sadly all images get stretched to the width of the post.)

By the way, by writing it in two voices, you aren't "cheating the system" somehow. You correctly said that notes with different rhythms should go to different voices. The G has a rhythm "quarter note, quarter rest", the C and E have a rhythm of "half note". Clearly the rhythms are different.

However, even your example with stems the same way is OK and can be encountered in "real music", e. g. in this bit of Torroba's Sonatina (a famous work for the guitar): 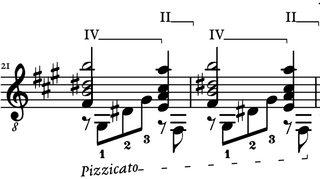 Not the answer you're looking for? Browse other questions tagged notation musescore ties or ask your own question.

7
Where do accidentals go when voices overlap?
5
Notation of multiple voices in Piano Music
3
Programmatically export musescore scores into separate wav or mp3 files?
3
I need help figuring out some of these note values for my sequencer
3
Voices doubling a dotted note in Lilypond
3
Unplayed 2nd voice in notation - spaces or rests
8
How does 8va work on a staff with multiple voices?
2
Ties - is there a distinction between these two notes?
5
Piano arpeggio symbol: split vs drawn through
18
How does one maintain voice integrity when longer and shorter notes of the same pitch occur in two voices