I am a beginner (perhaps intermediate) guitar player and a year ago, when I was at the very beginning, I came across a technique called 'pick rest' as demonstrated in this video:

The technique sounded to me very reasonable back then and I kept on minding it for some time. Though, over time, I forgot about it and was not applying it at all on my play. 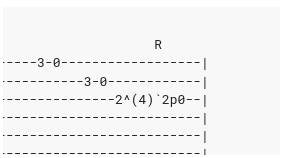 I noticed that something was missing, then I realised that I was missing the open (up) stroke on the second (B) string so was doing

Even though the 'pick rest' technique sounded very reasonable to me at the beginning, I neglected it mainly for two reasons:

But today I learned the usefulness of it in my own playing.

My question is: for the experienced guitar players out there, is it worthwhile to 'stick' to this technique in order to develop a 'good picking habit' from now forward? Or this technique does not apply for playing solos and stuff like that (as I pointed out above, I don't think I have ever seen a professional player using this technique, though I might be wrong, or the professionals have other techniques of 'economy of movement').

electric-guitar picking
Share
Improve this question
asked May 13 '20 at 18:09

Answering your question in the last para: among top tier pros, the pick rest technique is not universally used, but there are definitely some who use it a lot.

I'm thinking for example of Joscho Stephan, an absolute virtuoso, who uses it as a matter of course, and even talks about it in places like this video:

And if you want to see it in action, for example, here it's all over the place:

I teach this very same technique to beginners because I find that sometimes they pull the pick away from the top of the guitar which causes even more problems. The purpose of such exercises is to help the student develop a felling of connectedness to the guitar (or instrument in general). There are several valid picking styles and techniques and no one of then is "better" than the others. But I would say that for all of them it is critical to not pull your hand away form the guitar after plucking. The method shown in the video helps prevent that.

Also, I'd say that for consecutive picking this is a critical move. You need to be able to "plant" the pick on the next string when needed. For that reason I'd say you should continue to develop this.

Moving on to alternate picking you would be wise to practice another type of planting or resting. I borrow the term "planting" from classical guitar. The idea is to PLANT the finger on the string it is going to pluck a moment before plucking. This is advocated for arpeggios by players like Christopher Parkening but it also works for scales and tremolo. I develop the ides for alternate picking some years ago and teach it to my students, but never published anything on it. The idea is as follows. If you are going to alternate pick on a single string then you want to plant your pick on that string NOT on the next string. That may seem counter intuitive but it's simple. When you down stroke rather than letting your pick rest on the next string you immediately reverse direction and rest it on the same string you just plucked. Resting from below the string (don't cross over and start another down stroke). Now, this may seem like you're just alternate picking but really you're not. What you are doing is stopping the note you just plucked which (1) trains your hand to reverse direction quickly, (2) trains your hand to stay as close as possible to the string. Both of these skills are critical for developing speed picking.

As you may have guessed this only helps you get fast on one string. Well the trick to getting fast on two strings is in the video you posted, resting on the next string. One movement is NOT more important than the other, they are both important and should both be practiced. And, there are more movements related to string skipping etc. If you rely heavily on the technique in the video then you alternate picking on one string will get sloppy but if you exercise both then you will be clean on most any riff. Again, this guy's "trick" is very useful for helping beginners overcome bad habits but I would say that no matter how advanced you are this is still a basic movement that should be drilled.

Not the answer you're looking for? Browse other questions tagged electric-guitar picking or ask your own question.

7
positioning of neck pickup on guitars
4
A machine for automatic tremolo picking
7
Electric Guitar: is a good practice or bad habit that I tap the strings with my picking hand when there is a rest
1
Should I now relearn my picking from mainly alternate to economy?
1
What Kind of Right-Hand Picking Technique is Being Used in This Lick?
3
Alternate picking from string 1 to string 3 - ACDC back in black
3
Recommended thumb position and motion when using a thumbpick on an acoustic guitar
3
alternate picking for single stroke in alternating strings
4
My pick gets stuck and I'm trying to fix it with downward pickslanting. ( ~ 8 months of playing )
2
How do people play fast tremolo on guitar (with a plectrum)?