What is more important, avoiding parallel octaves between non-chord tones, or keeping a stretto exact?

I'm writing a fugue, and I've managed an almost perfect two-voiced stretto. Except that I get parallel octaves between two notes in the figuration. See image, last beat of m. 15.

Which would be considered a greater blemish on my fugue? Keeping the parallel octaves, or breaking the exactness of the stretto? The intended tempo is Moderato, at quarter note = 90, by the way.

Thanks to everyone's kind suggestions I've decided to tinker a bit with the fragment, which now stands thus:

Your passage is entirely musically valid.

You have parallel octaves when you have two notes that are a perfect octave, in the same voice that repeats. This is also true for the unison.

What you have here is one chord that is held for the whole measure and a little floral pattern that moves a bit in the Soprano voice, this is not parallel octaves.

I'm not entirely convinced you can have one chord in a bar and have parallel octaves, you do seem to need two chords. The E - E in the second bar is not in the same voices as the E - E in bar one, so that disqualifies it from being parallel.

What I see here that bothers me is not parallel octaves, I'm seeing that D# in the soprano being lower as the alto note (E) in the second bar. You may want to work on your voice leading as the D# is still going to be fresh in the audience's ears and it can clash.

The "rule" applies everywhere in that having parallel octaves causes the music to sound like an instrument or voice dropped out. The texture suddenly becomes thin. Similarly for parallel fifths or covered fifths or covered octaves. The effect is strongest between outer voices. Even in pop or country, one tries to avoid parallels between the bass and melody.

In non-polyphonic music, doubling of a line at an octave (or even a fifth) id only a voice thickening or coloring, not a parallel. The rule only applies between independent voices.

I think this is an nice theme and I wonder how you have been “harmonizing” the previous entries.

I can hear the chord progression I vi IV (ii) V.

To avoid the octave parallels you could slightly change the theme (soggetto) in the dux notating the two 16th notes a 3rd up (b c# b). No one will hear the deviation.

What happens with the 4. part?

Being passing tones mitigates the problem somewhat, but the fact they are in the outer voices is a problem.

Sometimes the way out of parallel/direct motions looking for the minimum voice leading change to get another relative motion. In other words, if the harmony is good, keep it and change one of the parts to get contrary or oblique motion. Probably best to keep strong beat harmonies as it and try to make the change on a weak beat (or whatever seems a subordinate harmony.)

wouldn't making the neighboring motion contrary and then delaying the move from G#5 up to B5 work?

...everything seems mostly the same, but the parallel movement is removed.

I suppose this is even the simplest... 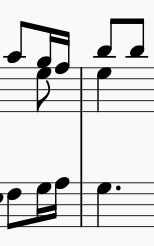 I'm not sure I agree with the comment in the accepted answer that the parallel octaves are OK because it's the surface, melodic detail of the harmonic skeleton. I've always had the impression the attitude was the other way around. Skeletal harmony in parallel motion can be glossed over with disguising melodic motion. Here is an example I like from L. Mozart's Nannerl Notenbuch...

...Red highlights the parallel fifths in the harmonic skeleton, blue highlights the "disguising" melodic to intervening thirds. I've seen that kind of thing rather than parallel melodic motion in outer voices.

And of course we aren't talking about instrumental doubling at the octave.

Not the answer you're looking for? Browse other questions tagged composition counterpoint or ask your own question.

3
Do I have to prepare and resolve non-chord tones in certain ways?
2
How to make my piece feel like a Presto