Is 8/4 time signature a thing?

I'm refering to Cross Examination Moderato 2001 by Masakazu Sugimori and Minecraft by C418. Let's assume the beat unit is transcribed by a quarter note.

Why I'm confused is, firstly because, I've never seen a sheet music that states a time signature as 8/4. Secondly because, I don't know how long a motif is in these pieces, 1 or 2 measures. Is 8/4 a legit transcription for these pieces? If so, is there other pieces that is in 8/4?

theory sheet-music time-signatures
Share
Improve this question
asked May 17 '20 at 12:59

With irregular timings, there's two ways (at least!) to write them out, so they're easily playable. One is to work out where the pattern repeats, and make that length one bar. So with something like 123 123 12, it's pretty straightforward to call it 8, if that pattern continues. If it doesn't, it's hardly a pattern!

Another way would be to put it into whatever comes close, and use accents. But that's awkward because each first beat of the bar would naturally have its own accent, naturally. So, not the best of three.

One other thought - when these odd ones are written onto sheet music, the better writers will group notes like quavers into their own little 'joined up' bits, like 6/8 should be two lots of 3 quavers.

There's a modern convention to notate bars that add up to 4/4 but have irregular 8th groupings as 8/8. Using the same logic I would notate this in 16/8.

Using 8ths rather than quarters as the unit has the advantage of making it easy to show beat groups by beaming. Some composers would state the groupings (as in my example). I'd consider this implicit in the notation, therefore unnecessary.

I think a lot of it is how you feel the pulse of the music and in what tempo. For the first tune, if you feel it in bars of 4/4 at around 126bpm, the repeated melody is in 8th notes and the motif is 4 bars long. However, if you feel it bars of 4/4 at half that tempo, the motif is 2 bars long and the repeated melody is in 16th notes. I have never seen 8/4 written out before and for a piece of music like the first one you posted, it would be easier to read as an 8th note melody, so why not break it up that way.

That being said, if you want to think of it as 1 bar containing 8 quarter notes, then go ahead, especially if it makes it easier to read.

I’m with @meganoob on the first piece, it sounds like a 4 bar motif with a syncopated 2 bar 8th note rhythmic pattern in 4/4 time. 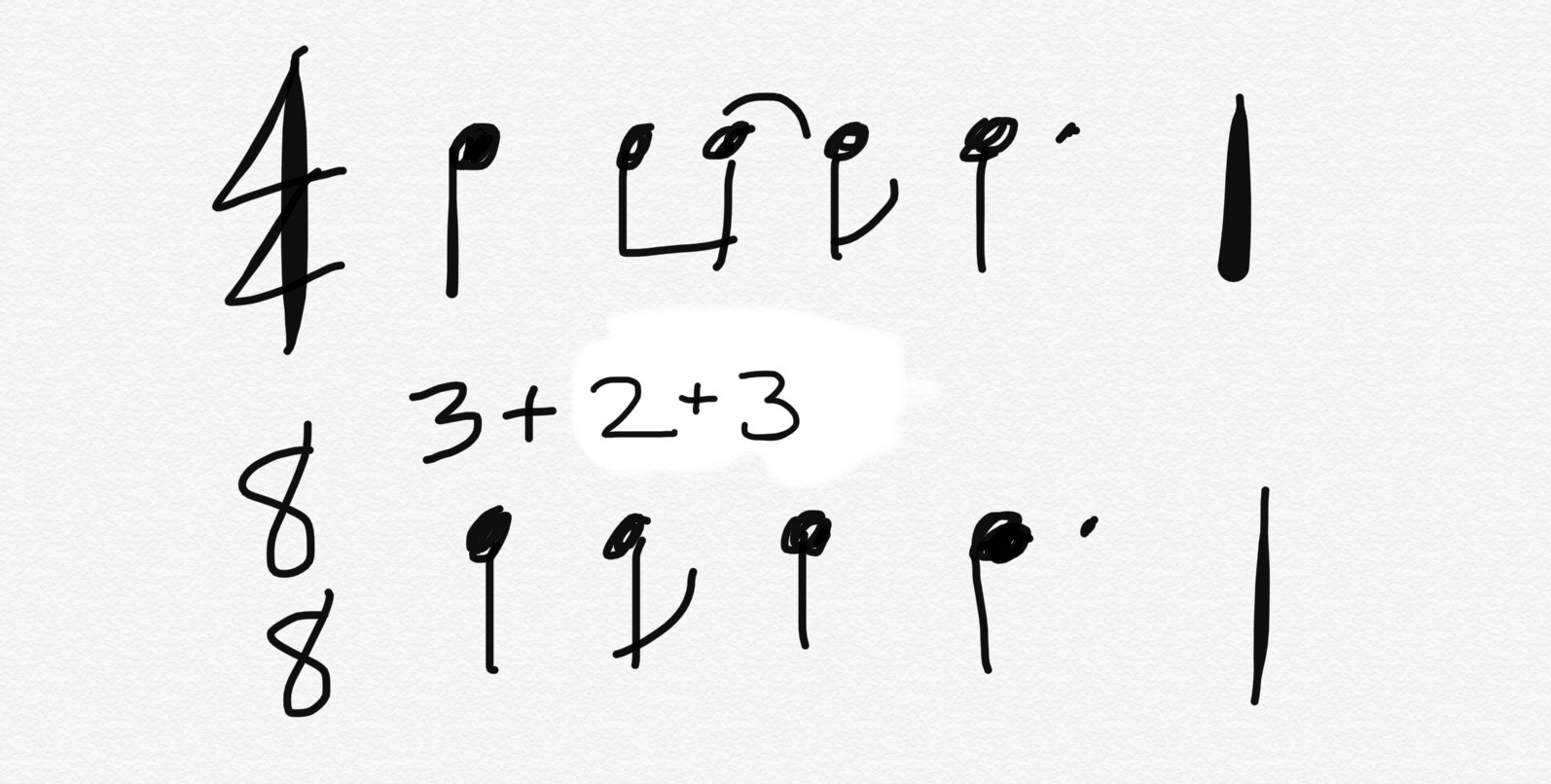 It is quite common practice to note groupings in the time signature, like 2+2+3 over 8 instead of 7 over 8.

Not the answer you're looking for? Browse other questions tagged theory sheet-music time-signatures or ask your own question.