How to complete a scale harmonization using Quantz' Versuch

It occurred to me there is almost enough there to make a sort of "rule of the octave" for a treble part. With some overlapping and transposing of Quantz' examples I got this... 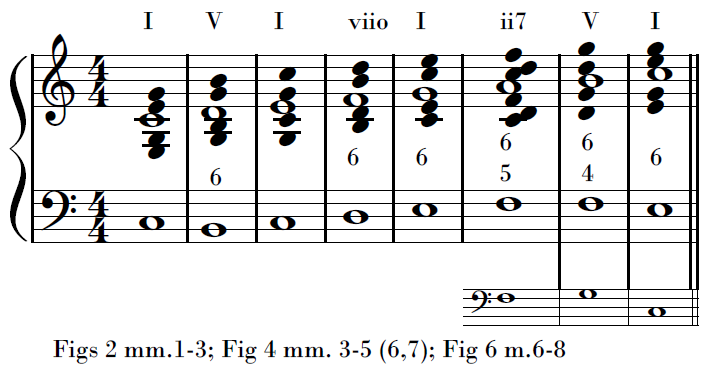 ...the ossia staff is my bass to end with a authentic cadence.

For some reason Quantz didn't show examples descending by step to/from the tonic. Figure 5 was the only descending scale to work from... 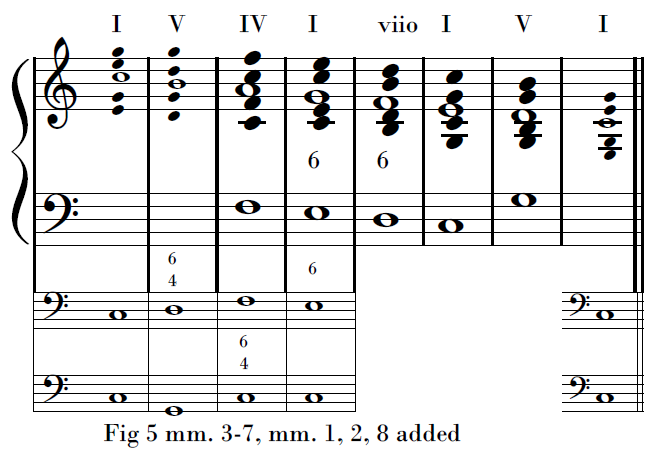 ...the small notes and ossia staff are my additions to complete a descending scale harmonization.

Do these two scale harmonizations seem ok? Obviously, I want them to fit with Quantz' early classical style.

When placed in the upper voice, the scale obviously needed a counterpoint in the bass; however, in contrast to the [Rule of the Octave], a standard model of accompaniment never established itself.

He goes on to note small segments of the scale that did have some standardization, like 1-2-3 with the 8-7-8 bass. But I would assume if any harmonization of the ascending/descending scale had been given in a partimento treatise as a "model," Sanguinetti would have noted it. I think that absence is probably telling. Even though partimento practice revolves much more around bass than melody, obviously there are plenty of melodic patterns involving suspensions, etc. that get incorporated in the tradition. The absence of standard harmonizations for melodic scales is therefore interesting. I would postulate it may in part be because of the issues I noted above. The ascending version can be done, but it's a bit awkward. The descending diatonic scale is quite difficult to create a strong progression (particularly for 8-7-6-5). And on the rare occasions where it does occur in actual literature, the different possible solutions depend on which "rule" is broken or what specific inelegant option is chosen.

EDIT: Oops, I forgot to mention one other sequential possibility for 8-7-6-5, which would use the "descending 3rds" progression commonly associated with the Pachelbel canon (I-V-vi-iii...). With sufficient figuration in a sequence this might work and shows up sometimes in late 18th-century music. But it's less desirable as a simple harmonic structure because of the accented parallel octaves created with melody and bass in every other measure.

EDIT: Okay, sorry, I did misunderstand what this was about. I never had any exposure to "scale harmonizations", the "rule of the octave", etc. when I was a student—I learned tonal harmony in terms of chord construction and voicing, voice leading, characteristic progressions, modulation techniques, and large-scale structure. We did use figured bass, but not in that fashion, and when we talked about harmonizing melodies it was in terms of the entire edifice of tonal harmony, not something you could distill down to a characteristic set of chords over a scale. I'm not sure that that "partimenti-style" teaching approach was all that common outside of the Neopolitan tradition in the 18th century (although if you have references to the contrary I'd be curious to see them). I'm having a hard time finding much rigorous information on it outside of Robert Gjerdigen's website, so that what I'm working from.

Notably, Quantz doesn't seem to have thought in these terms either, at least not as far as he lets on in that book. I flipped through Edward Reilly's translation and read the chapter the examples you cite are from, and he doesn't seem to ever present material the way those Neopolitan theorists do. Of course, he's not writing a composition manual—those are tips for beginning flutists to start on devising melodic variations when improvising and the like:

Since...most musicians lack the necessary instruction...so many incorrect and awkward ideas appear that it would be better in many cases to play the melody as the composer has set it rather than spoil it repeatedly with such wretched variations.

To remedy this abuse somewhat, I shall give some instructions, for those who still lack the requisite knowledge, as to how variations may be made in diverse ways on plain notes in the majority of the most common intervals, without contravening the harmony of the bass. ...

I do not pretend to have created in these few examples all the variations it is possible to discover on these intervals; I present them only as an introduction for the novice.

So, if we want to tease out a Neopolitan-style rule of the octave from his examples, we're going to have to make some pretty subjective decisions. He's not trying to present harmony in a systematic fashion like that, so we have to try to read his mind a bit; as I said in my original answer, those examples don't necessarily present progressions you could extend to a general case that way. What's more, I'm not sure he even thought about music in the same fashion exactly—again, maybe, but if so he doesn't let on. So we're kind of translating between one musical language and another, even if they do have a lot in common. I'll do my best to indicate what I think is more-or-less an objective truth and what's more a matter of opinion so that you can work based on your own tastes.

Anyway, the biggest problem with lifting directly from Quantz's examples is that he elides the rules of good voice leading. This is understandable because he's just sketching out harmonic frameworks for flutists to devise variations in—the flutists are meant to work out details like that themselves (see e.g. the other part of his Tab. X). However, rules of the octave are meant to provide guidance for writing harmony, so they do worry about voice leading, as you can easily verify from the manuals Gjerdigen put up. So, despite my earlier confusion, much of what I said is still relevant, although I'll do my best this time to put it in the proper context.

A few points in particular: Quantz doesn't concern himself much with avoiding parallel 5ths and 8ves, keeping the motion of individual voices varied, or balancing parallel and contrary motion between voices. We will need to correct for all of this somehow (there are some exceptions for parallel 5ths and 8ves as far as the Neopolitan folks go, which I'll discuss). None of that is just my opinion: on top of examining the rules of the octave given in the books Gjerdigen put up, you can read Fux's Gradus ad Parnassum for a text that was popular at the time and that states them quite clearly.

Also, rules of the octave are designed around harmonizing a descending or ascending bassline, not a melody. The partimenti exercises that come after they've been learned are designed around harmonizing a melody, but rules of the octave are meant to help students make connections between basslines and the harmonies implied by them. So, instead of working from Quantz's melodies, we'll need to work from the appropriate basslines, and see if we can harmonize them in accordance with Quantz's methods.

One last point: all the Neopolitan theorists seem to give three rules of the octave per "mood", starting with the 8ve, 3rd, and 5th on top of the I chord respectively. Since you only set out to write one, I'm going to do the same, in the interest of saving myself time. More-or-less arbitrarily I'll do one starting with the 8ve on top.

Just to make sure we don't stray too far from the Neopolitan tradition, let's do a quick analysis of one of their rules of the octave—I went with one of Fenaroli's:

I did this in a rush so if there are any careless mistakes I apologize. :P

From this (and the other Neopolitan rules of the octave you can read about on that website) we can glean the following:

Adding all this up, we get:

EDIT 2: I realize this has a significant issue if you were to actually use this to try to compose 18th-century-style music, which is that the chord given for the 5th scale step in the ascending rule is a vi7 chord, and thus would not perform the appropriate dominant function in perfect cadences and things. However, I'm reluctant to change it, because we live in the 21st century and I love the sound of that chord very much, so I would happily use it compose with anyway, broken tonal functionality or no. But I will revise this to be more suitable for 18th-century-style composition purposes if you like.

8
What techniques and methods govern how melody can suggest a certain harmony?
4
Is analyzing this passage as an expansion of a sequential phrase reasonable?

4
How to identify a pop tune that has vocal harmonization that does not move in parallel motion
1
Harmonization of bebop scale
1
How can I express Dm using only the notes of C major?
3
How to harmonize a melody without knowing the scale?
5
Using standard Roman numeral analysis how should 7th and 9th qualities be determined?
3
How to improvise over sixth chord in minor scale
12
Melody using a different scale than the bassline - what is it called?
9
Black keys - what scale are these, how to use them?
3
how to harmonize 5,4,3 in the soprano using I V I as the harmony?
6
How can I modulate the distance of a tritone using 3 secondary dominant chords?