Tritone sub for a minor chord

Is this a mistake? As far as I am concerned, it's not possible for a minor7 chord to contain an interval of six semitones. Because of that, you can't perform tritone substition on Dm7.

So in an instance like this one with a minor seventh chord, since there's no tritone in the chord, we just build a chord a tritone away. Since we're looking at Dm7, that tritone away is A♭7.

(See also Must a tritone substitution use a dominant functioning seventh chord?)

This article is about passing chords, not tritone substitutions. The excerpt you showed,

simply indicates that one option for inserting a passing chord between Cmaj7 and Dm7 is to insert a chord, Ab7, that is a tritone away from the next (or second) chord, Dm7.

I would like to add to the existing answers a possible motivation for the chord Ab7 as a "passing chord" between Cmaj7 and Dm7. The "reason" that it is a tritone away from the target chord doesn't really explain anything, at least not to me. What I hear is indeed a tritone substitution, but of course not of Dm7 (because that chord isn't substituted), but of D7. That D7 chord is a secondary dominant of G7, and G7 could follow that Dm7 chord to make it a full II-V in C major. However, even if G7 doesn't follow, the Dm7 as a first part of that standard II-V unit can represent that unit a certain way because our ears are so used to hearing it. Note that Dm7 could also be heard as a G7sus4 sound (without root). So when listening to that progression I do hear Ab7 as a tritone sub leading to the II-V unit Dm7-G7, even if G7 never comes, and that why it works well, at least for me.

First look at the plain progression...

...to that the passing chord is added (generically I call it "?")

...so A♭7 fills in the ? as the passing chord. It's root A♭ is a tritone away from the target chord Dm7. (This is not a case of tritone substitution, another jazz harmony idea, the similar naming could be confusing.) 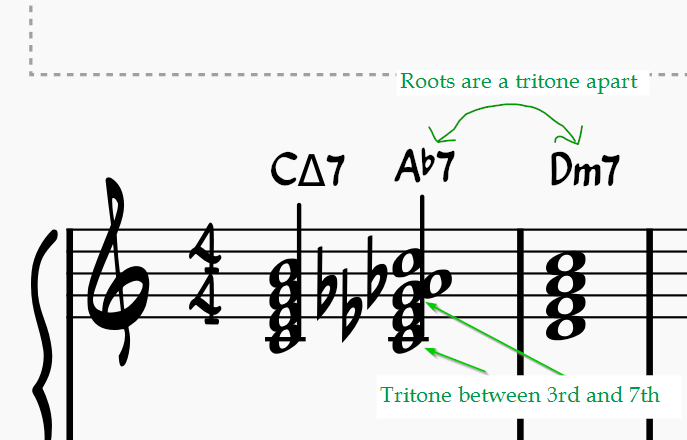 The author is coy about the voicing of the passing chords...

Note: That both the chord and the bass-line movement are important when transitioning between chords. You want both to be smooth. I will have more to say about this in future lessons.

A very quick review of the chart shows all the passing chords can be voiced so that the bass will either be a common tone with one of the two chords of the simple two chord progression or a chromatic half step between them. All other voices should move the minimal distance.

All the basses probably should be:

...where the bass should probably be C D D

Not the answer you're looking for? Browse other questions tagged piano chords chord-theory chord-progressions or ask your own question.

11
Must a tritone substitution use a dominant functioning seventh chord?

9
Is there any theory to decide a set of plausible chords per measure where a whole melody of a song is given?
5
Tritone substitution in a ii-V-I progression and chord names
13
How do you write successive, non-functional chord progressions?
4
Jazz Piano Diminished/Tritone Sub Exercise
9
What is the strict definition of any chord in the world?
4
Modal chord progression and tritone substitution
1
Identifying this chord (Fb Db F?)
1
Is there a name for this cadence - [Tritone Sub of V] - I
2
Substitution of minor chord for major VI chord
0
Dominant 7 alt vs tritone sub