On a piano scale what is considered "middle C"?

I'm learning to play the piano and I'm slightly confused after reading this:

Is the 1st note in the treble clef the same as the 8th notes in the bass clef? And if so, is that considered to be "middle C" on a piano?

Also, wouldn't there typically be more notes in between the bass clef and treble clef? Why are they missing in this case? If they normally show up, then where is "middle C" on such a scale?

Here are two pictures that should explain everything.

To your question, "Also, wouldn't there typically be more notes in between the bass clef and treble clef? Why are they missing in this case?" I should explain that in typesetting sheet music, the amount of space between the treble and bass clef of the piano is variable, but the number of notes between them are not. More or less space can be put between the staves to allow for slurs or ties or other musical symbols or text, and to allow for the peculiarities of cross-staff notes and cross-staff beaming. Regardless of the visual appearance, technically there is only one ledger line between the staves, and on that line goes only the pitch C (or C# or Cb).

It should also be noted that the two staves are traditionally set up to separate the part played by the left hand from the part played by the right hand; the lower staff is for the left hand, the upper for the right. When the music requires both hands to be in the bass register, or both hands to be in the treble register, the two staves can use different clef signs (for instance two staves with treble clefs or two staves with bass clefs) or the notation "8va" or "8vb" can be put over certain notes to indicate that they are to be played an octave higher or lower than they appear on the staff. 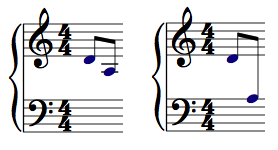 Here is an example from a Bach harpsichord concerto.

The two musical lines can cross from one staff to the other, but because of the cross-staff beaming and stem direction, and the lack of rests in the second measure in the bass staff, it's obvious that there are two lines played by two hands.

Yes, the first note on the upper staff is the middle C, as is the 8th note on the lower staff. The hands play one octave apart.

I'm not sure what you mean by "more notes in between the bass clef and treble clef", but what's written on the web page is standard. The middle C is always one line below the lowest line in treble clef, and one line above the highest line in bass clef. This can only be modified by using special notation such as an "8" above or below the clef symbol or on "8va" or "8vb" line above or below (respectively) the modified passage.

I explain it thus : originally music was written on 11 lines, with spaces (obviously) between. This roughly approximated the range of monks etc. voices.Trouble is, it wasn't easy to read notes written near the middle , so the lines were split into 2 lots of 5. This left the notes which lived in the middle line (C) without a line of their own.It didn't matter too much - middle C was not used any more than other notes, so when it did need to be written, it was given a little line of its own - a ledger line. Then, if playing keyboard type instruments in particular, any notes in the treble clef lower than middle C would have to have extra ledger lines, which actually doubled up the lines on the stave, but denoted them to be played with the right hand.And vice versa for left hand played notes that were higher than middle C.Hope this puts it all into place, Ein Doofus.

8
Priorities of piano scale practice as a complete beginner and what should I be paying attention to
5
Which notes are considered bassline/melodyline in a sheet music?
6
Which notes are bass line, versus melody line, in a rock song?
1
Is it fair to say the treble clef is optimized for piano?
2
Theory of scales in piano improvisation
8
Why does this version of Für Elise have d# then e both with treble clefs?
3
The Names of Treble and Bass Notes
2
Tips on speedy scale writing (and singing) in different clefs and modes
7
What symbols on piano sheet music show what hand should play what?
4
Issue with notes going over the time signature