Can you Help me Understand this Chord Progression | Gospel

I keep hearing the same little chord progression all over the place and I want to understand its function from a music theory perspective. Also I want to understand if there's some cultural reason why it keeps reappearing (like is it a staple of the genre and artists are referencing it, or something to that effect?).

Here are the places I have found it.

It appears in at 0:02 of Daniel Caesar's We Find Love. There are three chords in the first two seconds; I am interested in the second and third.

At 0:40 of Chance the Rapper's Same Drugs. It happens on the more of "same drugs no more"

. I managed to find a piano roll of someone playing this song and I transcribed (poorly) the chords. 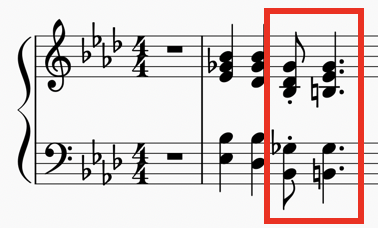 Also I have found the chord progression at 1:04 of this performance of Love in Need of Love Today.

piano chord-theory chord-progressions
Share
Improve this question
asked May 21 '20 at 16:54

In the bass line you hear the 3rd of the chord which is the tonic of the song. This third is resolving (leading) in the root tone of the subdominant, which is the fourth degree of the song (IV).

Your 2nd example (notation) should be in Gb major. The natural B in the last chord is a Cb (C flat), the subdominant in Gb major.

The progression you identify is a bass line mi-fa (I6-IV), whereby the eighth note of the syncopation is the 3rd of the tonic (this note is the bass tone when we have the 1st inversion of the tonic.

In classic Roman number we write I6. This means C/E in C major, respectively Gb/Bb in Gb major or F#/A#.

(The last example has a similar rhythmic motif but the harmony is different: ii - I6).

May be you have edited your question or I have overseen this last comment to your 3rd example:

I think I have understood that what is fascinating you is rather the rhythmic figure than the chord progression itself: they all have that staccato chord into the longer one

that staccato chord into the longer one is called syncopation.

You are right: this syncopation is a specific feature of black gospel music! The European audience was fascinated by the syncopation of the afro-american music in the second half of the last century (e.g. Mahaliah Jackson: Down by the riverside) and this is certainly a cultural feature - as well the syncopation is an element of the English language. (I remember we sang a song that was .. .. (short long short) but it was adapted as: _.. (long short short).

Now as the other answers say it is used in passing chords, that's correct!

(The first thing I've copied from the guitar songsters was that they filled the cadence I-IV-V-I with passing tones. May be you know: This old house (Rocky Docky) or Lean on me (Someone to lean on). These tunes are both just built on passing tones between the cadence! Here you can study the passing tones and adapt them to other songs: you just play Do Do Do Re Mi Fa FA Fa Mi Fa So So and then you syncopate the bold chords and you have what you were looking for. (Mind the inversion I6 (MiSoDo=3-5-8) of the tonic!)

I can tell you other situations when this syncopation is used in Gospel music:

here are some other examples of syncopations:

and here you can see how Eric Clapton sings the syncopation while Pavarotti is not so friend with it.

I always thought Elton John has been inspired by Gospel. You can discover plenty of syncopation and passing chords:

The chord you're looking for is a basic major chord, but with the third in the bass. For C it would be C/E.

The important thing to realize is that the chord's root note doesn't have to be the bass note. If you have some other note in the bass, then it will work mostly just like the original chord, but it will additionally have some properties of chords with that bass note. For example, C/G ... in C it's kind of a tonic chord (home chord), but it also partly feels like a G chord. Halfway to a dominant. A common progression to end a song is C/G - G7 - C. First you almost give the listener the final high-point, the dominant chord, before really giving it in the G7. Prolong the excitement!

How to come up with chords like C/E? Practice them in various places. In any song with chords, try to play the song with different chord tones in the bass, and that way you learn how it changes the harmonic feeling and your expectations of "what chord could come next".

How to use those chords in progressions: usually you want to have some sensible movement in your voices. The lowest voice, the bass is a very important voice. Another important voice is the melody, which is usually the highest voice. Move those two voices according to taste - though usually the melody is given to you - and set the in-between notes to taste. For more on that see my answer to How to determine passing chords

Here's an example of a movement with the melody going E-F-G, and the bass C-D-E. You have many options for what happens in between. Ask yourself: what four-note chords have a G and an E, and E as the bass note? Well, at least C/E and Em and Em7!

All of the progressions start from C major, but what are the other chord options there? How would you analyze their chord roles in C major?

We could call this a passing chord, accented through a syncopated rhythm. Yes, a common feature of gospel music.

Not the answer you're looking for? Browse other questions tagged piano chord-theory chord-progressions or ask your own question.