Is there a recognized standard for absolutely correct chord spelling?

I can't seem to find a definitive guide on the nuances of spelling chords. Every resource I find contradicts another. Some use things like sus9, some are liberal with adds, and others are so strict that some chords can't actually be spelt. Does anyone have a resource they could share that is considered at least some sort of standard?

chords chord-theory chord-voicings
share | improve this question | |
asked May 22 at 14:58

There are some standard rules and conventions in place that work well. One thing I will correct is that you seem to think that there is no difference between a sus (suspended) chord and an add chord. Suspension is a very specific device that is typically used in classical music to "suspend" a cadence or resolution where one hears, for example, the 7 going to the 8 and the 4 going to the 3. This is the classic example of a cadence where a diminished 5th interval resolves to a major third.

The add chords mean just that, you "add" an extra note. The historical convention is that a sus chord is MISSING the 3rd, i.e. that note that defines the major or minor character of the chord and either a 2 or 4 is in its place. In its place meaning in the same voice where the 3rd would be. Since the 3rd is MISSING there is less opportunity for dissonance, although some will be present due to a Major second. The "add" function means in addition to what is already there. And you do not want to create minor second in the chord structure as that would be very dissonant. Hence, to avoid conflict both in harmonic content and notational abuse, we use the octave. An add9 chord would contain (1, 3, 5, 9). Whereas a sus2 would be (1, 2, 5).

The "convention" for naming chords has roots in music history and that has led to modern theory. Yes, there are some subjective elements to this and it's based on what people generally decided was "good practice". However it is NOT ambiguous and if people are not using the conventions then they just don't want to. You can't stop people from saying ain't even though it isn't a word! And if people use it enough Webster's might decide to include it.

There are chord naming conventions that indicate the inversion of the chord, i.e. which note is in the bass. The classical convention is to use subscripts that relate to the intervals of the chord but there is still potential ambiguity in the ordering of the other notes.

These conventions are not necessarily logical but have evolved over time. For example one might be bothered by the fact the a 7th chord is dominant and not Maj7 by convention. That is what it is and I've NEVER seen anyone violate that convention and survive. But there is a tendency for people to over state what the rules already indicate as a means to be "educational". One example of this is the courtesy accidental. You may know that in standard music notation that an accidental holds ONLY for the measure it appears in. Immediately after then next bar line its action is gone. Yet sheet music is filled with natural signs, flats and sharps in parentheses in the measure following one with an accidental as a "reminder". I could imagine someone notating (1, 3, 5, 7, 9) as a Maj7(add9) just to emphasis the point that there are 5 notes present but it is not necessary as Maj9 implies that you are taking all notes up to and including the 9th.

Almost any half way decent book on guitar chords has these naming conventions, as would a music theory or harmony book. You cannot learn from stack exchange comments. This forum is for discussing music and helping people by answering questions, but this is not the equivalent of an on-line course at an accredited university. While there may be some wriggle room and exceptions with notation it is NOT wildly random as has been suggested with everyone making up their own names. And the example you quoted in another post about sus and add is pretty cut a dry.

No, there's not a single, absolute, definitive, agreed-upon standard for chord naming, nor is there a recognised body empowered to make arbitrations on disagreements, or hand down punishments for any transgressions :)

The popularisation of chord symbols seems to have happened in the 1930s, as a way of enabling the publishing of songs in an efficient form. "Do You Know...?": The Jazz Repertoire in Action References Barry Kernfield's work on fake books:

A mid-1920s craze for the ukulele led to the addition of four-string ukulele tablature to some published sheet music.... This tablature was situated above the vocal line, so that performers might realize the song with ukulele and voice, rather than piano and voice—or alternatively with all three together. The purpose of ukulele tablature was to provide, via graphic illustration, blow-by-blow instructions for an instrumentalist to place his or her fingers on the appropriate frets of the appropriate strings. With fingers pressing down in the proper position, the ukulele player would then strum across the strings, producing a succession of chords that were meant to provide a suitable accompaniment to the melody line and to be reasonably in accord with the notated piano music. In general, ukulele tablature represented the simplest possible chords, intended for amateur performance. 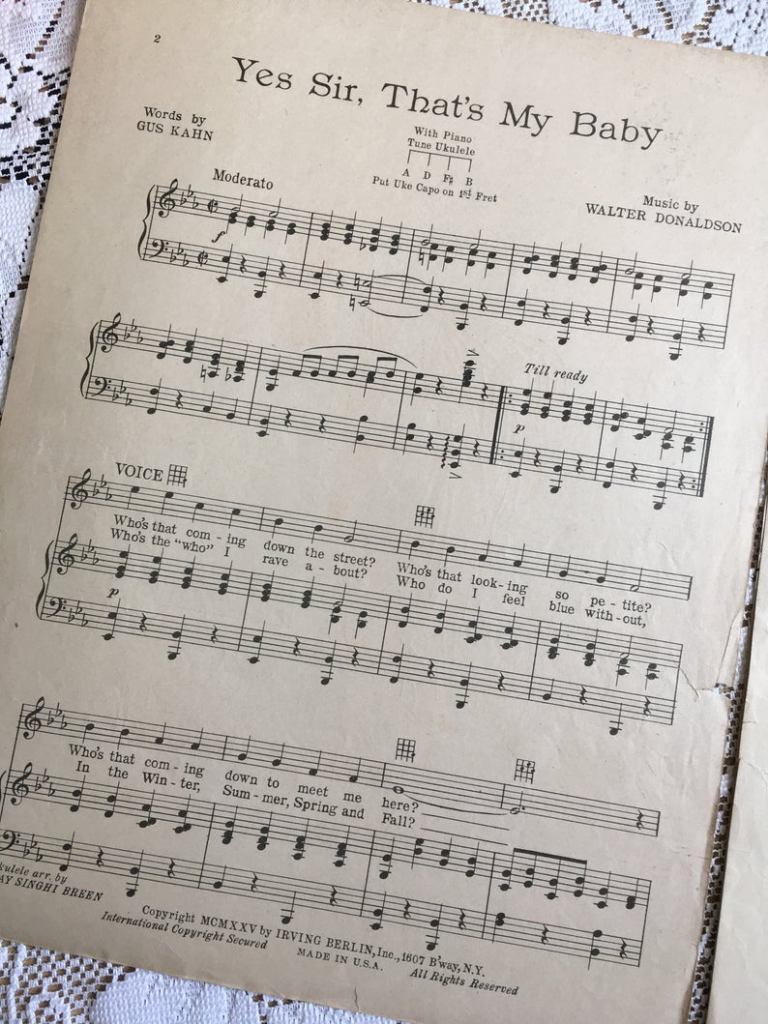 Alternatively, four-string tablature in pop-song sheet music might specify tuning and finger positioning for the banjo, rather than for the ukulele, or for a hybrid of the two instruments, the banjulele.

Then... in 1930 "harmonic symbols" [as he calls them], "chord symbols" [as they are also known], "chord changes," or "the changes" [as in jazz parlance] began to be inserted above the tablature. The original intent of these symbols seems to have been an entirely pragmatic one: to avoid the potential confusion of having two different sets of tablature running across the page. If four-string tablature for ukulele, banjo, or banjulele appeared above the vocal line, then chord symbols for the six-string guitar would appear in conjunction with that tablature. The six-string instrumentalist was expected to figure out string tuning and finger positioning from some source other than the sheet music itself. And vice versa—if the sheet music presented six-string tablature for guitar, then the ukulele player, banjoist, or banjulele player would get chord symbols only and be left on his or her own to figure out string tuning and finger positioning for a four-string instrument. In some publications of sheet music, the tablature dropped out altogether, while the chord symbols remained....

A later popular distribution of music 'condensed' using chord symbols was The Tune-Dex card system, introduced in 1942 by George Goodwin, a radio station program director, as a subscription service for radio stations, music professionals, and musicians to keep track of popular songs. Here's an example of a Tune-Dex card: 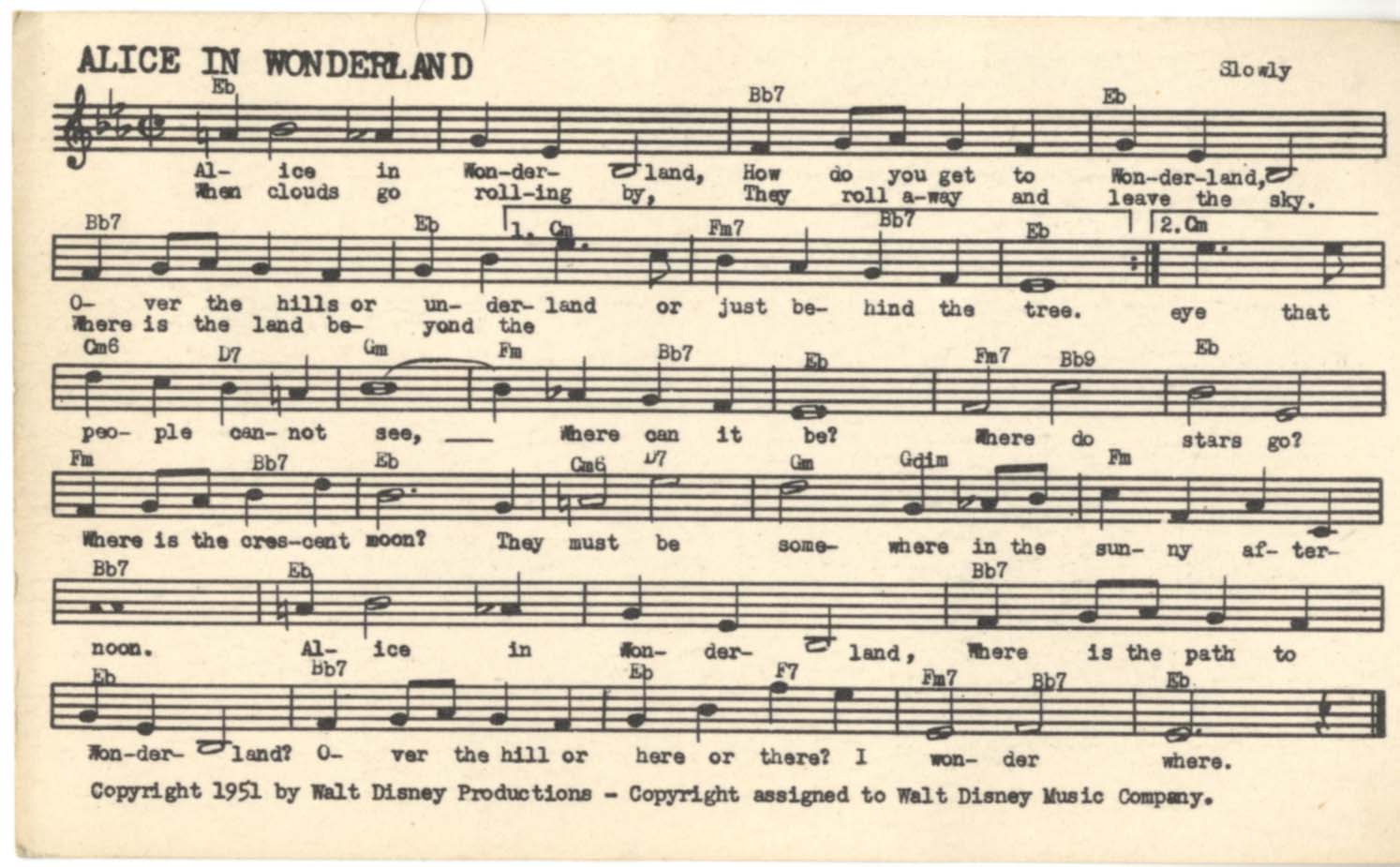 Later on, other publishers of unofficial fake books, and later still, music publishing companies themselves, came to use this style of chord symbol.

What there does not seem to be is any single authority, or authoritative work on exactly how chords should be notated, and interpreted, as chord symbols. One can imagine that individual publishers may have had their own internal style guidelines, but ultimately it's similar to the way there is no absolute arbiter or standard for what constitutes correct English. Most people agree on most things, but there are tricky edge cases that might cause debate.

Not the answer you're looking for? Browse other questions tagged chords chord-theory chord-voicings or ask your own question.

9
Is there any theory to decide a set of plausible chords per measure where a whole melody of a song is given?
10
Determining Key / Key Change / Chords?
3
Does the rule regarding consecutive octaves/fifths actually hold any weight?
1
I've found the chords to Chicago by Meg & Dia but can't figure out the theory
0
Exhaustive list of chord (at least triad and dom7) functions for a software ear training tool
5
Spelling diminished and augmented chords
3
Chord spelling help for piano arrangement
8
What is the strict definition of any chord in the world?
24
Are there reliable, formulaic ways to form chords on the guitar?
0
Correct chord name for Am(maj7)add9?