A capo is a device used on the neck of a stringed (typically fretted) instrument to shorten the playable length of the strings, hence raising the pitch.

It is frequently used on guitars, mandolins, and banjos.The capo is most commonly used to raise the pitch of a fretted instrument so that a player can perform a piece in a different key using the same fingerings they would use if played "open". In effect, a capo uses a fret of an instrument to create a new nut at a higher note than the instrument's actual nut. 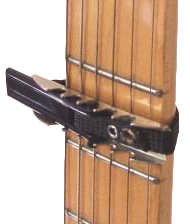 Do capos exist that can be disabled without removing them from the guitar?

Why might one *not* want to use a capo?

How could it be that the capo isn't changing the pitch?