I was listening to Killswitch Engage and decided to look Adam D's rig up. He's used multiple amps and guitars, but is sparse with pedals. When reading this I started wondering how they achieve cleans and different distortion tones while on stage.

1) Wireless has nothing to do with this. Wireless goes from the guitar to the pedalboard (if there is one) and into the amplifiers. The amps will see a normal signal through a normal cable, cause that's all they know. A clean/dirty setup like you are describing can be done a multitude of ways.

2) Absolutely, read on for suggestion of what product does this. Although there are many ways to skin this cat. Most guitarists will recommend the ToneBone Amp Switcher though. Also, if the amps used are tube or not (most, in this case will be tube amps) they will require special attention, or they will literally fry themselves up.

A channel on a amp pertains to a certain sound. The most basic channel switching amp will usually have 2 channels. One clean, and one distorted. The distorted one (on a tube amp) will amplify the signal more, causing it to distort before sending it to the power section of the amp where it "gets louder". The clean section of the amp will have less amplification (and therefore clipping distortion) and therefore sound drastically different. This allows you to have the sound of multiple amps in one. Which is a good thing.

Most guitarists are comfortable with the channels on their amps. You'll find - more often than not - guitarists use channel switching to achieve sound differences. This is physically changing the preamp tubes (in tube amps - which are 99.5% of most professional guitar amps out there) circuit to actually add or remove distortion. EQ plays a role in this too.

See this image for an example that he uses for channel switching: 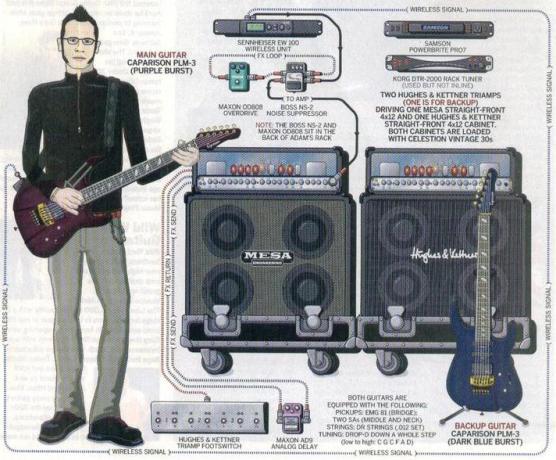 (This is an old example, out of a guitar magazine that used to do this all the time, you hardly see these anymore. Also, this "style" of amp rig is also not seen that much anymore. Why? Why not. More gear is more better to guitarists. Just ask any of us.)

In the case of a touring, headlining rock band, money isn't an issue. And the recording of their albums probably used many amps per song (or at least throughout the album) to achieve certain tones. The solution to achieving the sounds on the record is simply to bring the amps you used to get those tones. This is where heaving roadies and amp techs comes in handy. It saves your back. And your mind. 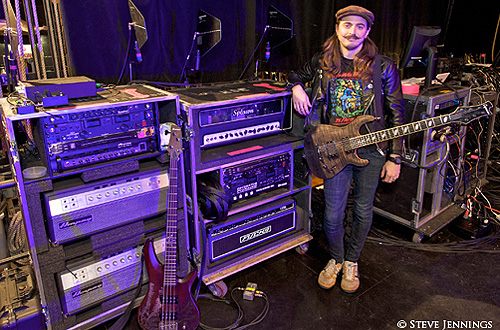 In the example above you'll see a head rack, or something similar to it. Each one of these amp heads are connected to a cabinet (usually mic'd offstage, to control bleed and stage volume/mix), although a product like the ToneBone Head Switcher can connect multiple heads to one cabinet, in fact it can do you're #2) requirement exactly. It's amazing. This can be tricky, and if done wrong - a very expensive tube amp repair, so beware! Doing this saves you from bringing multiple cabinets, but has a potential risk if done improperly.

In either case, pedals may be used. In the music that KE does, effects are used sparsely, if at all. That's just a stylistic choice they make when creating the music. Syncopated and distorted low-register riffs like they enjoy playing don't take well to common effects like Chorus, Delay and other time-based effects.

Caveat: certain effects can be used to create distortion, or mimic amps without needing to actually bring, ship and maintain them. But that's not any fun for guitarists. Guitarists love complexity, old wives tales, and being as difficult as possible.

When you go to your next live show, check out finely what the guitarist(s) have. It's kinda a hobby of ours. If they're hauling their own stuff (and playing out on a frequent basis) you'll see a small number of amps, 1 or maybe 2 if they're feeling happy. Amps, even heads, are very heavy. They'll have a conservative pedalboard and be able to get a lot of great sounds out of it all. If they're paying someone to do it for them, you'll see their entire gear room on display. And that's cool too, cause they don't have to lift an 80-pound amp head night-after-night. They'll have their large pedalboard out too, spaceship lighting and all.

I'm so sorry that was long-winded. This stuff gets my juices going.

Amplifier switching is indeed sometimes done. It is very easy to split an instrument-level signal between two preamplifiers, and to have A/B switching. It can be done very quietly and transparently by a simple devices.

There are MIDI controlled patchbays that let you route signals in various ways, and store these as presets. So when you stomp on your MIDI pedal to recall program #99, you could have your signal routed to a particular amp rack, where there is also a particular effects processor which has also recalled program #99 of its own.

Multiple power amps converging on the same cabinet is something different entirely. It is imperative that only one amplifier be active, and that doesn't just mean that one should be actively playing the signal while the others are quiet, but that all the other amplifiers must be galvanically disconnected from the loudspeaker. This can be done with, for instance, relay switching. But it has to be absolutely fail safe: for instance, using normally-open relays which will all open (and cut all amplifiers off from the speaker) if the switch loses power. If the outputs of two amplifier are connected together, they basically short each other out. It is particularly bad if the amplifier are solid-state units, which have a low output impedance. Each amp is rated down to, say 4 Ohm driving ability. Connect two together and each one looks like a less than 0.1 Ohm load to the other, at which point it is up to the internal protection in the amps to avert disaster. The speaker switcher has to deal with flyback voltage from the speaker and it should also provide a dummy load to the amplifiers which are disconnected from the speaker, in case they are tube amps that are pushed hard.

Someone "out there" is undoubtedly doing it, but it's not such a great idea. Maybe in "laboratory conditions", where you need to switch amps to the same speaker to do direct A/B comparisons, but in the live environment where enough things can go wrong already, another one isn't needed.

Not the answer you're looking for? Browse other questions tagged guitar amplifiers guitar-effects effects-pedal or ask your own question.

2
Distortion effects pedal to amp
7
Should I connect my multi-effects pedal to PA or Amp?
2
Simple delay pedal with more headroom
0
Pedal board switching on and off pedals
2
Overdrive pedal in an acoustic amp
1
Amp modeling on multi fx pedal through an amp
1
Do I need a (pre) amp for a distortion pedal?
3
Loop pedal volume in effects loop not controlled by amp volume controls
3
Crate amp footswitch question
0
Can I use my PC as a pedal with an external guitar amp?