How to synchronize left hand and right hand

First of all, I only want to play for fun and my only source of learning is courtesy YouTube.com

So, for a beginner learning how to, what is the normal / proper way to learn this type of music. Those two samples have one thing in common which I like: the left hand has a very steady movement. I just finished the first one. And working on the second one. What I did was first for each measure learn the left hand, right hand and then synchronize the right with left.

I was thinking another approach would be using a metronome. First practice with left hand, right hand, and then combining both but without consciously synchronizing with left hand. I tried this approach a little bit. But I got quite nervous by the sound of the metronome and abandoned it afterward.

How do you properly start out if I have a normal class / instructor?

The problem isn't about difficulty per se, but if your concern is about synchronizing your hands and playing with a metronome, the concern is about rhythm. You example includes things like hand position changes and playing double notes. Those require techniques which will take your attention away from rhythm.

You can select other music to work on rhythm. Try stuff that doesn't involve position changes, like this...

I think the Kunz is especially nice. It's all five-finger position with the specific intention of sight reading. To some degree it's about finger independence, but it's very much about two hand coordination.

If the metronome makes you nervous, slow it down. You might need to slow it way down until you get used to playing in strict mechanical time.

Count the beat out loud while practicing! This should help you really internalize the beat and rhythm. It's almost like going into a trance. You want every action to be in time to the beat and to never break the beat. When doing this don't go back and try to "fix" wrong notes. Don't stop, back up a beat or two, and re-play. Stay in time and get back where you are supposed to be as quickly as you can. Remember, the point is to focus on rhythm. Backing up to "fix" mistakes absolutely destroys the rhythmic flow. If you really need to stop, at least get to the end of a phrase or cadence, and then take a breather.

Starting to learn each hand separately is a good start. Playing with metronome is a very good way of practicing. Make sure to start by setting it slow enough to play relaxed. This might be much slower than the target performance speed.

Let's look at the second measure of the second piece. On the bottom staff I wrote a rhythm that combines rhythms of both hands. This is how you should think about it. This way you easily see how D# note in right hand comes in between notes played by left hand, and which notes are played by both hands at the same time. Play thinking of this combined rhythm. At the beginning it will seem a bit mechanical, but hand independence will come later, with more practice. 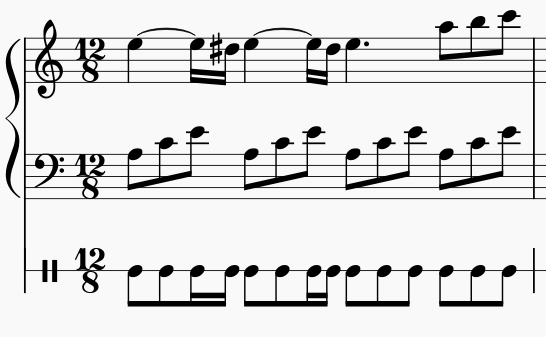 When you have difficulties always start HS (hands separated) and don't mind the metronome until you know the piece and you start to work your musicality (use metronome only to check your rhythm, you should develop your own metronome in your head).

Your first goal is to get up to speed (and maybe to a little higher speed) of the piece you are learning using HS practice. After that, you can start connecting your hands to play HT (hands together).

Note that it is very important to give the rest to your hands, so if you feel fatigue in your RH then switch to the LH. In this way, you will learn faster and would not develop any injuries.

If you have difficulties with some particular fragment then try cycling (HS up to speed --> HT): take the difficult fragment and add one/two notes of the next bar and try cycling it. You will soon find a more natural and comfortable hand position/fingering and can proceed much faster.

If you don't mind some more reading, I am suggesting to look at this famous book by Chuan C. Chang. For example, few chapters about:

18
Playing one hand loudly and the other quietly
28
Learn piano one hand at a time or simultaneously?
1
How to approach playing rhapsodic passages against left hand in Chopin prelude#24?
1
Piano practise: hand independence for beginners
2
How to approach piano chords that require you to press high in the keys
3
Piano: How to Internalize a Beat in One Hand?
10
Jazz piano: chords and melody in right hand. How?
1
Reading piano music sheet for left hand play
3
Bach's Toccata is a bit confusing, how am I supposed to play this?