I am doing a 3rd species 4:1 counterpoint exercise and I was told that on weakbeats you could use consonant or dissonant intervals. If the intervals on the weakbeats are consonant then the melody can leap to the next interval but if not, the melody must move by step. Here is my example, would this be acceptable in counterpoint? You can see the leap from B to G on the second beat making an interval of a 4th with the cantus firmus.

In strict third-species counterpoint, fourths are dissonant, and leaps into dissonances are prohibited except in one specific circumstance.

In a double neighbor figure, there is a leap from the second beat to the third beat, with the third beat being a dissonance. This is permitted. (See, for example, this summary of the third species rules.)

The double neighbor occurs when beats 1 and 4 in the counterpoint are the same tone, and beats 2 and 3 include the notes a step higher and a step lower than the original tone. For example, Câ€“Dâ€“Bâ€“C or Câ€“Bâ€“Dâ€“C.

In the OP example, however, since it is not a double neighbor situation, the leap from B to G, with the G forming a fourth (a dissonance) against the lower voice, is against the rules.

With a little re-wording you have "If the intervals on the weakbeats are dissonant the melody cannot leap and must move by step." Your example violates that "rule."

Is the clarity of the rule the problem, or do you think your example presents a special case that shouldn't apply?

Personally I don't like procedural stuff like this word as prohibitions and prefer positive statements of what you should do:

If you do the things you are supposed to, you don't need to keep second guessing every move you make and proof reading against a list of prohibitions.

Yes, I do think my example presents a special case because that 4th could be a chord tone (G major) so how can it be considered "dissonant"?

This is a counterpoint exercise and so you really shouldn't apply harmonic concepts to how contrapuntal music works. I don't mean harmonic in the general sense of harmonious music, but the specific harmony theory of chord roots, root progression, chord inversions, etc. Those are not concepts for this style of contrapuntal music. Species counterpoint tries to idealize a Palestrina style which predated harmonic chord theory.

You want to harmonically reduce...

...but this is counterpoint. You aren't dealing with chords, or in this case implied chords, you are dealing with melodic lines. You actually have only two lines...

...you must treat them as lines, not implied chords, or you be ignoring the whole linear aspect of counterpoint. To make explicit how each quarter note movement in the top line is a distinct contrapuntal event and not a rhythmic elaboration of an implied chord, you could show it like this... 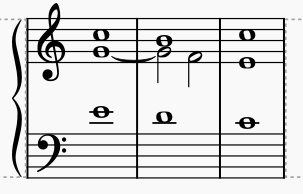 Treatment of the fourth is tricky and specific point from Fux seems worthwhile to add, because it's not all stated together at the beginning of the book where consonance and dissonance is defined. 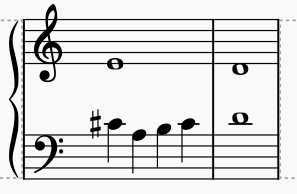 ...which is the inversion of your example parts. Inverted the dissonant fourth is a consonant fifth and presents no problem. 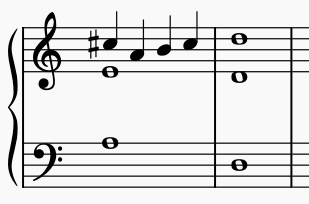 ...where the soprano and alto present the same thing as your example. However, there is one important difference: the Fux example is in three parts putting the fourth formed by the soprano and alto above a bass. This particular situation and how to handle the dissonance/consonance of the fourth is addressed in a footnote 70 pages earlier in the text which then redirects to a comment from Fux nearly at the end of the book for fig. 194. There is no note at all on fig. 130. (Pretty confusing and inconvenient IMO!)

the interval of the fourth in the inner voices is not very prominent; in fact, it rather assumes the character of an imperfect consonance.

Of course your example is two parts and doesn't have a inner voice so the fourth is regarded as dissonant.

To your ears, and mine, there probably will seem to be no difference in sound between these examples. But that isn't the point of species counterpoint exercises. No one writes species counterpoint as actual composition. It doesn't reflect modern musical styles. The point of the study is to show that you understand and can control a rigorous procedure.