I can improvise relatively freely over standards when using a moderate variety of voicings in the left hand.

I can improvise basslines reasonably well over right hand voicings.

Given I'm a recreational player who progresses slowly, what steps might I take towards simultaneous and different left and right hand improv?

I that situation, I would craft multivoicing on both hands and polyrythmm and hand independence with:

This section is definitely not for beginners, but it may be very useful for few readers.

I can share some ideas of how I have pursued jazz piano, but hopefully you will get a better answer from someone with bona fide jazz piano skills.

Red Garland on Blues by Five from album Cookin' with Miles Davis: 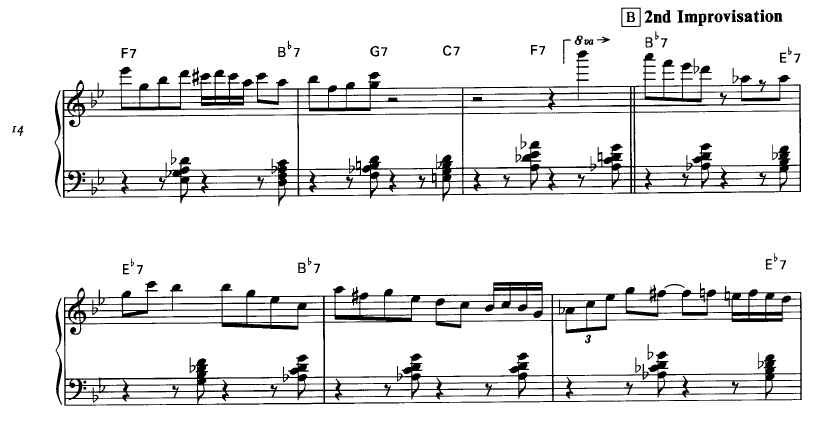 Bill Evans intro to Green in Blue from album Kind of Blue: 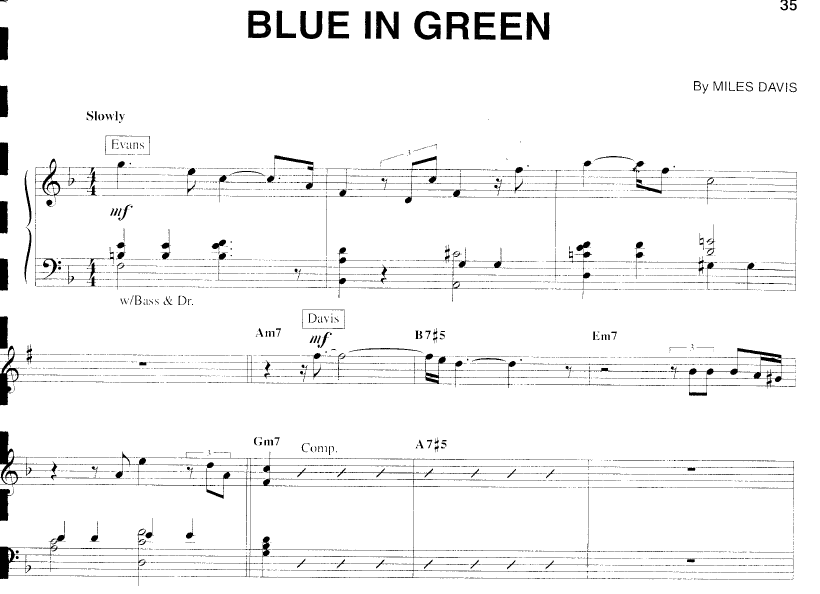 You can even try searching songs you know and like in YouTube with the word "transcription" to get transcriptions and audio... 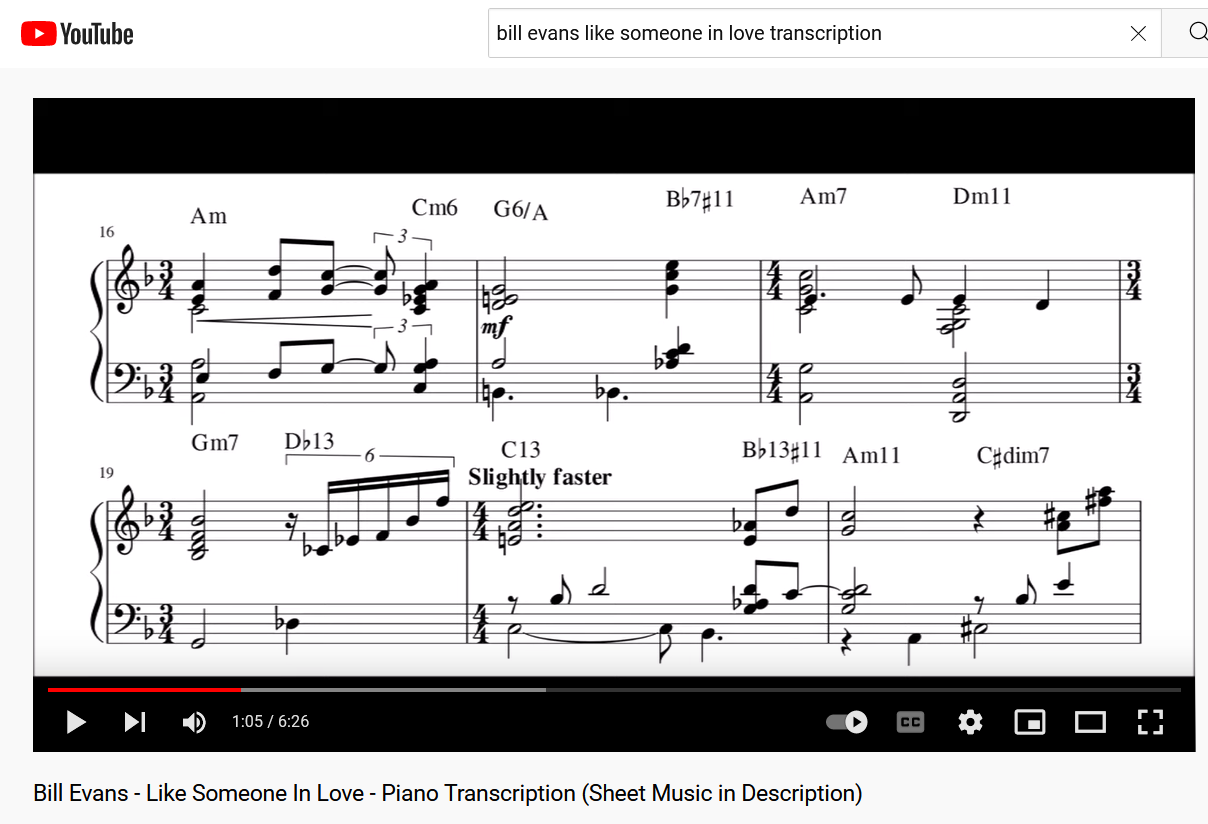 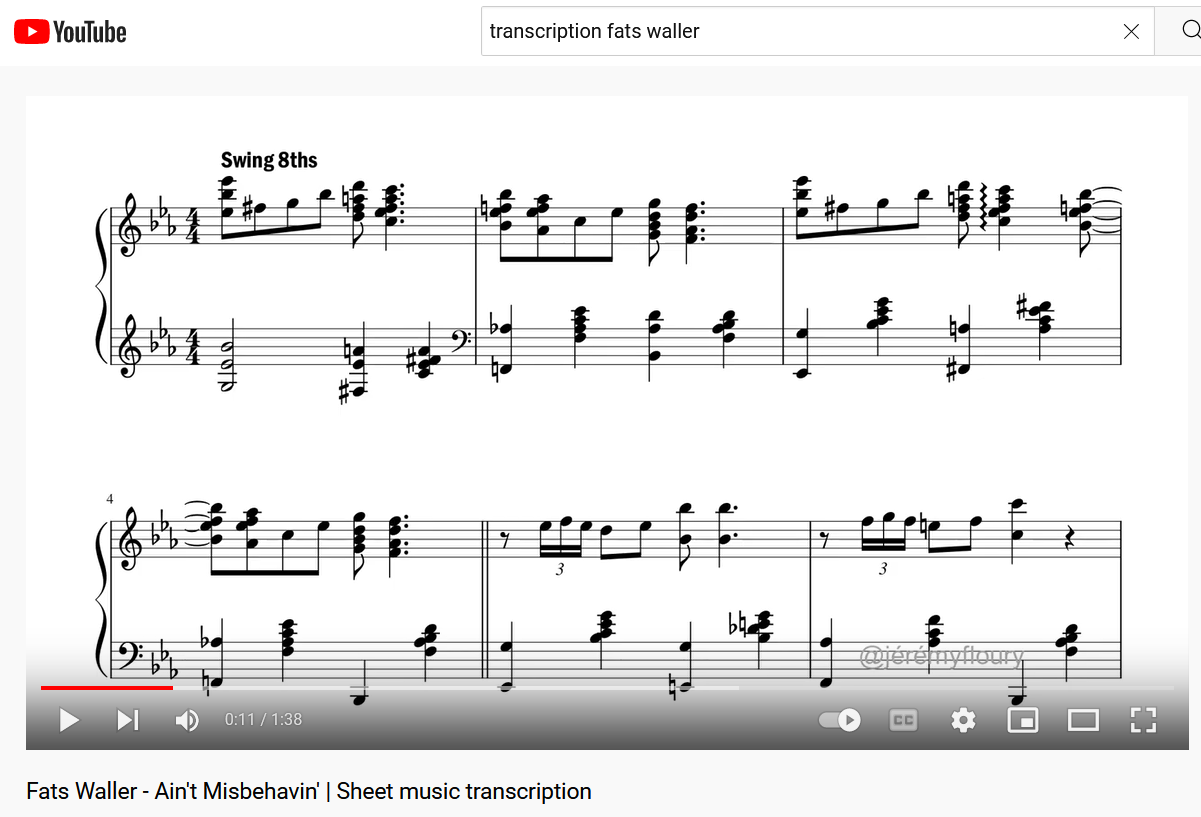 Of course you may have the same reaction that I have when listening and reading those transcriptions: I guess I'll just study up and become Fats Waller or Bill Evans. No problem!

Obviously mere mortals like us need something practical to go with studying geniuses.

That leads to a short digression about lead sheets and original published scores and original records. They are all different. Recently I've found lead sheets from fake books to be so bad that I've tracked down whatever original published version of jazz standards and made my own lead sheets to get basic melodies with chords from the original music. It boggles the mind what people can do to simple harmony like I6 vi7 ii7 V9 in fake books. Sure, when you play a song you can reharmonize and elaborate, but for study that's what you get from transcriptions and recordings. But for a lead sheet I prefer the tune with chord symbols based on the original published form when a published form is available. My main point, beyond ranting about fake books, is watch out when trying to reconcile a fake book version with a transcription/recording of a song.

Getting back to building up piano skills to play something like the transcriptions of the greats, here are two samples of how I've tried playing stride and block chord styles, first one is my own tune, the second is Polka Dots and Moonbeams...

...the treatment is sort of a mechanical etude, but it's just so I can develop basic skills for two textures.

Your goal is to integrate the two hands. I think that should focus on rhythm with attention to composite rhythm, what notes coincide with the beat, and where chords are placed relative to the beat. Try to differentiate those aspects in regard to style.

The Red Garland transcription sample is to me a typical example of a fast bop style of piano. I notice that the "horn line" in the right hand keeps a steady flow and includes hits on the beat while the chord is not on the beat but comes on the up beat at the "duration" in the harmonic rhythm sense. In other words, the chord harmonic rhythm is basically one chord change per two beats. But the chord is played in the left hand only on the up beat of each two bar duration. I see that in other fast tempo transcriptions.

In the slow ballad example from Evans and the stride example from Waller, the chords come right on the beat with fairly steady even durations. In other transcriptions of Red Garland he handles rhythm similarly for ballads.

You could take some of the song you have worked on already, look up some transcriptions, compare the rhythmic handling, and make whatever adjustments are needed to get your rhythmic playing more like the transcriptions.

Given I'm a recreational player who progresses slowly, what steps might I take towards simultaneous and different left and right hand improv?

I think key is so called automation, e.g. like this:

That's the automation part. For improvisation I suggest to review your best or most enjoyable improvisations:

When learning drum patterns I noticed it was sufficient to go through all combinations rather than memorizing any number of rhythm patterns. E.g. when trying triplets, I went through all 9 combis:

Result: From listening to my band I knew what to play at any time. Automated improvisation.

BTW, this will work for any instrument. Confirmed by my keyboard and organ.

86
How can I significantly improve my hand independence on piano?
17
What can I do about my problems with piano scales which manifest in just one direction?
0
Question about Building My Composition/Improv Skill
4
Why and how to play chord progression?
1
Piano practise: hand independence for beginners
2
Developing Hand independence and Finger independence
5
What exercises might one do to truly master one's playing of a song?
10
Jazz piano: chords and melody in right hand. How?