How to teach the staff to a teenager?

A friend of mine who is 18 has played guitar for practically his whole life, except he's only played by ear and tablature. He's been playing piano for a year and a half now, but he's never learned to read notes. He had a classmate try to teach him the musical staff and the notes on it, but failed. He knows the acronyms of FACE and Every Good Boy Does Fine, but it takes him a long time to recognize what each note is on piano sheet music. So he turned to me to help teach him.

How do I teach him to read notes on the musical staff?

Simple practice is best to start. Something like flashcards is ideal, and what my teacher used when I started piano. Have a fixed deck that he can go through repeatedly (shuffled in between each attempt), and have him focus on accuracy. Through simple repetition over a few weeks he should become quite adept at recognizing the notes.

Then he should start practising simple songs. Probably simpler than the level he currently plays at. Again, have him focus on accuracy and the speed will come with repetition. The songs should not be familiar, and he should attempt different entries to avoid becoming familiar with the tune since he likes to play by ear. (For me, I had to avoid falling into muscle memory.)

Learning the notes on any staff is a lot of memorization at first. There are a lot of little tricks to remember what each line and space is on the staff, but it can be a lot to learn at once. I've taught a few younger kids how to read the treble and bass clef (not any teenagers though) and while FACE and Every Good Boy Does Fine helps some it confuses others.

There are also several online sites that have exercises to train recognizing notes on the staff. MusicTheory.net has a very good exercise for it and lessons to go along with it if he is still confused. I recommend pointing him to that for extra practice in recognizing notes.

I assume that this person already understands the stave and can, slowly and methodically, translate between a stave position, a note name, and its position on an instrument (that is, which key to play, which fret to hold, etc. depending on the instrument).

I assume this because they're simple concepts.

What he needs is practice; and to encourage him to practice, motivation. 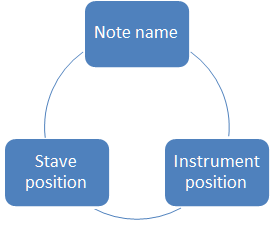 The motivation is to realise the usefulness of being able to do these translations at speed. There are a lot of musicians who can't read sheet music, but almost all musicians have a need to communicate using note names, so your pupil should understand how useful it is if:

That's one-third of the circle in the illustration.

Since he has asked you to help, your pupil clearly wants to be able to work with the stave, so he must see the benefit already, but it's worth taking some time to hammer home what that means:

The purpose of all this is to motivate him to practice, because he knows what skill he's aiming for, and how each practice exercise helps toward that goal.

So we have 6 skills. He may decide that some of them are not relevant to him (yet). For example perhaps he wants to sight-read, but doesn't want to write music; that would remove two skills from the list (and actually, for many people, having learned to read the stave, writing it is a doddle).

Unless your student lacks motivation, I don't think you should need to actively participate in his practice. He needs to sight-read music -- slowly at first, by manually counting the lines to each note if necessary, but with practice, faster and with more complex pieces. He needs to speak the names of notes as he plays, and as he reads from the stave. If he wants to write music, he should transcribe pieces he plays by ear.

The more he does it, the more fluent he will become.

It should not be a issue of age. I myself have taught 8 year olds how to read music. Get yourself a good theory book and start counting notes. You learn this by doing.

Write the numbers A B C D E F G out. Mention it to your student that when you go up on the staff you count forwards and when you go down you count backwards. It is tricky at first because you are not taught how to count the alphabet backwards at school.

You starting counting from G on the second line from bottom on the Treble Clef and on the F second line from top on the bass clef. Then you just keep on practicing until you know them by heart.

I use flash cards with my students. This is something that you have to do by rote, like learning multiplication tables. A few things can help, though. FACE and Every Good Boy Does Fine (and then All Cows Eat Grass and Good Boys Do Fine Always for the bass clef) are useful mnemonics. But also, consider looking at middle C in both treble and bass clef. Then look at the C one octave above and one octave below, and you will see that they are the mirror image of one another. Then go up and down another octave, (two ledger lines above treble clef, or two below bass clef), and you will see the same again. If you can understand that there is one line (middle c) between the bottom treble clef line and the top bass clef line, it helps to picture the whole set of both staves.

So, a combination of this sort of picturing and rote learning generally works best in my experience. Also, it often helps to work this out using a piano, since there are visual cues for each note (C is always to the left of the two black key group, for example).

I like Dom's suggestion of just focusing on a single note, to which I'll add: teach where that note is across several octaves. Get them used to the idea that whatever you write in one place on the staff (be it a single note, a short figure, or a simple triad) can be moved up to a higher octave but will still have the same note names. Learning to visually recognize octaves on a staff is musically important, easy to do, and also reduces the amount of work they have to do, since they'll fill up multiple staff positions with a single letter.

This is just a personal anecdote, as I have no experience in teaching. But I've recently started trying to teach myself basic music theory from scratch as an adult, so I may have some insight.

Trying to remember FACE, Every Good Boy Deserves Fruit, Good Boys Deserve Fruit Always, and all the other mnemonics was just confusing. I just started ignoring the fact that some notes were on "lines" and some were on "gaps", and just treated it as an alphabetical progression.

I still can't read it particularly fast, but I imagine that's a question of practice. At least I don't have to remember four different mnemonics, and which one applies to which staff any more - I just need to know the alphabet.

It's just practice and perseverance. If you aren't able to stick for 5 minutes doing some exercise by rote and want to just play the whole time, there's not a lot that can be done. Conversely, even a little disciplined practice will make a big difference.

Since the student is familiar with guitar, that's where I'd start. First string: E (top space), F and G. Give him heaps of exercises with just E and F until he is completely confident. Then move to G. Second string: B,C and D. Same deal. As a guide, perhaps six half-hour sessions until he can't make a mistake reading the notes on the first two strings. Then work your way down across all strings, introducing the notes very slowly until he associates a written note with a finger and a fret and can read and play all notes in the first position without looking at the instrument or moving hand position. I've seen student start fine on the first two strings then lose their way because new notes have been introduced too quickly, so take it really slowly.

Not the answer you're looking for? Browse other questions tagged piano learning sight-reading or ask your own question.

2
Mnemonics for memorizing the Staff: useful or harmful?
6
Question from non-musician: Is it possible to learn sight-singing without having learned an instrument?
8
Exercises for quickly identifying intervals on the staff
12
What do the letters above the piano staff represent?
8
Question about reading music sheets
1
Can you really teach how to play notes on the flute?
2
Me and the grand staff: how to achieve pacific coexistence
4
How should I teach myself sight-reading?
16
Primary school child writing music
3
How to self teach myself sheet music reading (for piano)?