How do various techniques and equipments for adjusting reeds compare? e.g.

Reeds bought from stores, even of the same brand from the same batch rated with the same number, do not work equally well. Reeds also change their character as time goes by. What (physical adjustments) can I do to shape the reeds to make them / keep them sounding the best they can? Any techniques or equipments you personally have used / invented that works consistently well enough and cost a reasonable amount?

I am assuming for this answer that you are wanting to adjust commercial reeds made from cane (not synthetic materials), and that you are not trying to make your own reeds from blanks or from stalks of cane.

I have always felt that my time with the saxophone was too limited as it was. So, I always wanted to keep the reed work as simple and quick as possible while getting the desired results. It so happens that I also have spent relatively little money doing so.

Also, it is important to store reeds well so that they last. Doing so is, in my opinion, at least as important as adjusting the reeds correctly.

With all that in mind, here is a list of what I use to deal with reeds. It's really not as extensive as it may seem at first glance.

At least in the American Midwest, especially in the winter months, the biggest problem with reeds is warping due to uneven drying. I'm not referring to the wrinkling at the tip of the reed, but rather a more "baseline" change in the reed such that the table (flat side) of the reed is no longer flat. A warped reed will not seal against the mouthpiece and, therefore, will be harder to play than a flat reed, and it may be tough even to get a sound from the reed. You can check for warp in two ways. If you are playing, try taking the mouthpiece off the instrument while keeping the reed on. Cover the round hole of the mouthpiece with your palm, then suck the air out of the mouthpiece. If you can remove your mouth from the mouthpiece while the reed stays closed on the mouthpiece, eventually producing a "pop" sound as the reed comes away from the mouthpiece, you have a good seal. If you cannot make that happen, or the pop happens immediately and is very weak, you probably have a warped reed. The other way you can tell is to take the reed off the mouthpiece and put it on a flat surface. Try rocking the reed from side to side. If the reed rocks that way, it is warped. The farther it rocks, the more warped it is.

Now, when you play, you want the reed to be wet. We hope that getting the reed wet cures at least some of the warp issue, and in fact, that is your best bet: if a reed is warped, try soaking it in water for fifteen minutes. I use something to hold the reed underwater in a cup of water. (Specifically, I use the plastic holder that the Vandoren reeds ship in.)

If that does not work, you can try sanding the warp out. Put your sandpaper on the flat surface and rub the reed back and forth across the sandpaper, taking care not to sand the area anywhere near the tip. This may work, but it is really difficult to get the back of the reed truly flat this way.

One other method is similar to something described in the first video in the question. Use the reed knife to try to get the reed table flat again. Again, this is difficult to do well. The factory will usually do a much better job at getting the reed table flat than I can, so I usually try to avoid working on the table unless the reed is otherwise a lost cause.

If the reed seems too hard, or you have problems playing is a certain range, the reed may be out of balance rather than specifically too hard. The second video above shows a test on clarinet for balance, though it is not quite clear from the video itself what he is doing to check. What I typically do on saxophone (alto or lower) is to turn the mouthpiece on the neck so that my lip is holding one rail of the reed shut, then try to play in the low range down to the lowest note. I turn the mouthpiece the other direction and check the same thing. If I can play without difficulty on each rail, the reed is probably good in this range. If the rails play differently, the reed is probably out of balance. If the rails play the same but are both too hard, the reed is too hard. 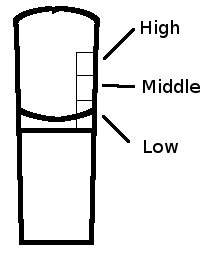 You will want to remove a little material, then test again. Especially with the knife, material comes off faster than you might expect. If you are using a knife, it is important to have the knife moving in a back-and-forth scraping motion prior to contacting the reed; otherwise, you risk gouging the reed.

If the reed was just too hard, you can use sandpaper over the area of the vamp (on the non-flat side of the reed). Use just a few strokes, avoiding the reed tip. Then, check again.

Once you have both rails playing the same in the low register, balance the middle register and high register using the same procedure, removing material from the approximate area you need.

Note that if the reed is too soft, there is little you can do to adjust it. You can try a reed trimmer if you want, but you will not get a lot of extra life out of the reed that way. You can also make the reed seem a little harder by positioning the reed closer to the tip of the mouthpiece.

While there are certainly more reed adjustments available, some requiring more specialized equipment, I have found that procedures above solve nearly all my reed issues.

Evaluation of the videos

You asked about the Youtube videos, so I will say a few words about each.

I would be happy to attempt to answer any questions. It is very difficult to explain some of these ideas in a web forum, and I may have been less than clear in some of my prose.

A long time ago I used to be a saxophonist, and later picked up bassoon and carried that into becoming a professional bassoonist. (However I've undertaken a career change long since.) In the course of my musical career, I learned to make my own bassoon reeds, and adjust them with knife and sandpaper (other implements required, of course.)

While I was doing this, I figured that similar adjustments could be made to sax reeds. While I wasn't playing sax any longer, I had friends who still were. Anecdotally, a box of reeds would have 10-20% of "good" reeds, most were passable but nothing special, and a few that were poor. After very little experimentation, I discovered that it was very possible to take a "bad" sax reed and make it play much better; Often I could take a throw-away reed and make it play better than the best of the out-of-box reeds.

The simplest thing to do is adjust the reed so that it has longitudinal symmetry; if the left and right sides are asymmetric, it will not play well.

From there, it gets much more tricky (and my memory on specifics is hazy, as it's been many years). Basically, you want to create a gentle-curving slope from the heart of the reed to the lateral edges, as well as from the center to the tip. Different locations with different thicknesses/slopes will yield different tonal characteristics regarding tone and responsiveness, and this can be made to vary widely.

For me, I would get a gauge on the progress by holding the reed up to a light to see the variance in brightness/thickness. After awhile (with single-reeds), I found that great improvements could be made before any play-testing was required (and then usually just response or tonal adjustments to specific sound ranges).

I greatly enjoyed doing this work, but it requires some amount of trial-and-error to get the feel for it.

Looking at the above videos, the jig-and-blade solution looks novel, and will help you get a balanced reed more easily, but if you are not happy with the result that it produces, you will of course need to make more adjustments.

The David Borque instructional set looks like it would be similar to the techniques that I used.

7
What is the best position for a Sax reed?

6
Effect of Rubbing Alcohol Upon Reeds
2
Stronger reeds for clarinet and saxophone
7
Playing Sax and Clarinet
1
Difference between different kinds and brands of reeds on the alto sax
7
Strength of clarinet plastic reeds compared to wooden
6
Switch to Clarinet or Saxophone, which one is easier for an oboist?
1
A tenor mouthpiece made to use alto reeds
3
Saxophone vs. Clarinet differences for Traditional Jazz
5
Do woodwind reeds (Sax, clarinet, etc) need break in to play better?
1
Playing clarinet from saxophone music