Too many notes in this measure [duplicate]

Ask Question
Asked 5 years, 3 months ago
Modified 4 years ago
Viewed 2k times
3
This question already has answers here:
Rest above a note in a piano piece (4 answers)
Closed 5 years ago.

It seems there are too many notes in the treble clef below. The time signature is 4/4 yet there it starts with a quarter rest, then a dotted quarter, then 6 eighth notes. This adds up to more than four quarter notes. What does this mean? And what is the meaning of the eighth rest below the quarter rest at the beginning of the measure? 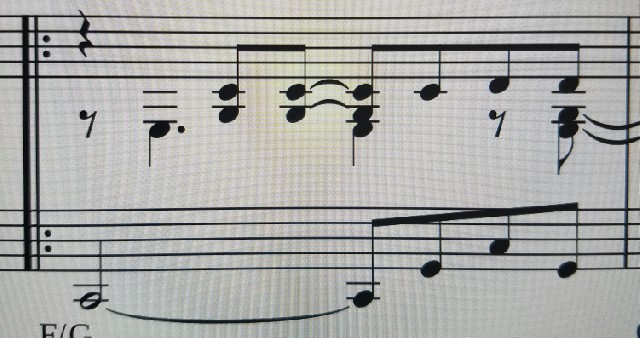 What you're looking at is two separate voices. In more complicated music, we sometimes write out two independent lines (or voices) on a single stave.

The first voice in this piece comprises the crotchet rest, followed by the quavers C+G, C+G tied to another C+G, then C, D and D again. This adds up to four crotchets.

There is only a single voice on the bass stave.

The reason I know this, is because of the direction of the note stems. See how the first voice only has stems that point upwards? The second voice all points downwards. I know which rests to associate with each voice through the vertical positioning of the rests on the stave, and also because there's only one interpretation which will allow the bar to add up.

The music notation is correct, but possibly a bit odd if your not used to it. Seperated out it would look like this: 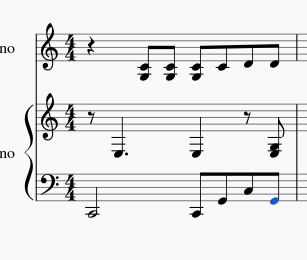 You can here it at This link Some guesses were made obviously. I I left out some of the stuff, but you get the point.

I believe there are two different voices in the top staff; The higher voice starts with a quarter rest then synchs up with the lower voice on the "c" and plays six more eighth notes making a full measure.

32
Rest above a note in a piano piece
3
Cannot get bar to accord with time signature
8
Why are these notes separated on the stave?
3
How should I play a measure where one of the voices doesn't add up to the time signature but the other does?
2
In what order do you play these notes? And how?
1
Is there another instrument in this piano score? How to tell when it's ambiguous in some parts?
-1
Sheet Music query, a note printed in a bar as half note and quarter note on the same beat
0
Too many notes in measure?
1
How are these 2 notes theoretically possible?
1
How do I play these two Ds?
See more linked questions

12
Is there piano notation for finger sustained notes (as opposed to pedal sustain)?
2
How to read this measure of music with "in between" notes?
23
How is it that 12 eighth notes fit in a measure labeled as common time?
3
Unplayed 2nd voice in notation - spaces or rests
4
How to interpret this two voice timing? It looks like there are only three notes in 4/4 measure
2
how to read quarter notes and half notes in 3/4 time?
1
I don't understand this rhythm notation