Here is a bit from the standard piano arrangement of Sondheim's "Loving You" (from the Musical "PASSION"). This is near the start of the song (measure 9). The key is D-flat major (there are 5 flats). 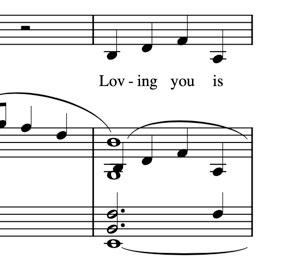 Maybe it's me, but I'm finding it near impossible to play those six notes with only two hands. Do I need to do some serious stretching, or is there something here I'm missing?

A published version of a musical theatre song is usually a reduction from an orchestrated version, so there's a desire to include the main lines of the various instruments even if the reduction can't quite be played on piano.

Another aspect of piano versions of musical theatre songs is that there's a lot of expectation on the player/accompanist to make it work and have the elements that are most important for the singers, dancers, and audience.

The piano versions of musical theatre scores aren't written to be played precisely the way classical piano music is. I've been told by a broadway MD and accompanist once that for a big arpeggio, just to put the root note down and write "big arpeggio" and the pianist will understand and make it happen.

Point being, merely omit the note(s) that you think are least important and hardest to play.

I recommend two possible solutions for you. Neither is better than the other except for your own personal preference.

Play the LH Eb as a grace note, play the RH Gb with the LH thumb, and use a single sustain pedal hold through the entire measure.

The image below is an illustration of how this works. The parenthetical Eb is to show that the pitch will be present, but held by the pedal.

Move the RH Gb up one octave.

Is is very possible. A simple option is to play the G(b) with the left hand: 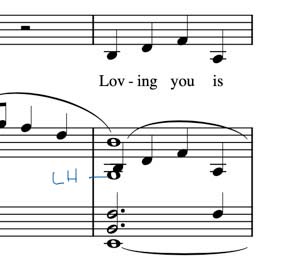 You can use the left thumb for only G or both F+G (put the thumb tip at the front edge where the F and Gb are actually almost at the same height, rather than the side edge). Le right hand is free to play the rest.

If you hand is too small the usual strategies are:

13
What is the best way to play a chord larger than your hand?
2
Same notes above each other