Transcribing music which has no obvious metre

I am about halfway through transcribing Ryo Fukui's "Early Summer", but I am having trouble figuring out how to notate the rhythm for the introduction (0:00 - 0:44) since I can't identify any beat to the music.

It seems clear that the measures all start on the strong bass notes, but that's about all I can tell.

I'm able to put together a 'literal' transcription -- i.e., one that when played sounds identical to the performance -- but it would be almost impossible to actually read, because the notation is very unmusical and pretty ugly. For example, this is the first bar of the piece: 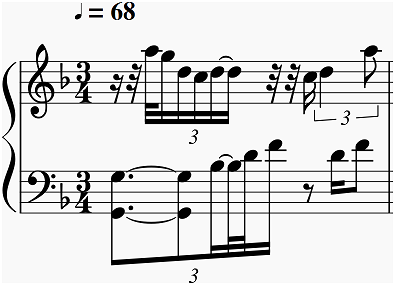 (I apologise for any bad notation; I have no background in music theory and I haven't tried to clean it up yet. I want to get it all down roughly in MuseScore before I switch to Lilypond for the final version.)

How should I go about transcribing a piece like this, which seems to lack any sort of constant rhythm? Should I just get down the rough shape of the piece and leave the exact timings to interpretation, and how would I notate this?

If I were transcribing this, I would approach it just like you have--by tackling one bar at a time. Then I would follow this method.

There are ways to notate the "stretching" and "squeezing" of the tempo. For example, in measure 2, the left and right hands are off from each other rhythmically, and I think this is because the right hand is pulling back a bit, lagging behind the left hand. Nonetheless, I would still write those notes as simultaneous and would add the text "pull back" above the right hand part.

For example, this isn't perfect (and I haven't listened closely with any transcription software), but my first pass would be to notate it like this:

The third measure "squeezes" the time a little bit--it cuts out a beat and moves on to the fourth measure more quickly. For a case like that, I would simply notate measure 3 as being in 5/4 time. Alternatively, in those scenarios, you could notate it as 6/4 and put some text indicating to move quickly to measure 4.

The really fast notes in measures 4-5 might be a little quicker than sixteenth notes, but I would notate them as 16th notes since that's the nearest beat: 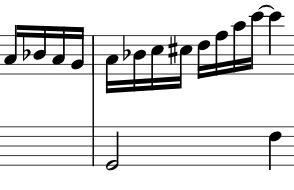 and perhaps I would add some simple text (maybe "play faster") indicating to speed up, though this probably isn't necessary. Too much of that type of text, though, can make the piece hard to read, so I would save it for the most extreme cases.

EDIT: There's another reason I mention the sixteenth notes--sometimes I have to find whatever touchstones I can to establish the beat/rhythms. I knew those notes in the right hand were faster than eighth notes, but it could've been hard to discern whether they are eighth note triplets or sixteenth notes. So I turned to the bass in the left hand and listened more closely to the second note (the D). This D sounded like it occurred on a downbeat, and this was crucial information: this base note D (this downbeat) occurred immediately after the fast run in the right hand. The only way for the fast run to conclude immediately before a downbeat (the D bass note) is if those fast notes in the right hand are sixteenth notes, not eighth note triplets. So that measure is an example where the bass note can serve as a touchstone for the beat. (It helps a lot that the bass/left hand is repeating a similar pattern throughout all of these measures.)

This is a really fascinating solo piano part to transcribe, and it provides a way to study several interesting notating/transcription techniques. Great choice!

The tempo isn't constant but there is a clear enough "beat". Start with the left hand, which repeats a pattern of two "bars" - the second one is a tone higher than the first.

When you have decided how to notate the left hand so it is readable, add the right hand notes around it. It will probably be a good idea to use grace notes for some of the faster runs, rather than trying to notate the exact rhythm.

Don't be too literal about trying to get computer playback "exactly right". That will always lead to a mess like your example.

Find some examples of the sheet music of songs that are performed in a free rhythm, and study them.

You should do exactly what you're doing: try to get the rhythms down as exaxctly as reasonably achievable and refer people to the original for the definitive version. This is what Keith Jarrett did when people kept asking for a transcript of his Köln Concerto, and in fact he'd been refusing to transcribe it at all for a long time, because he thought the result couldn't be faithful enough - so you're in good company!

Not the answer you're looking for? Browse other questions tagged notation rhythm jazz transcription or ask your own question.

1
Advice for figuring out unusual rhythms when composing
1
Help getting rhythm from head to staff
2
Transcribing piano from recording when available recordings are poor
9
Reinforcing meter when dealing with alternating 1/8 and 1/16 notes and rests
9
What is a clear way to write a bar that has an extra beat?
17
How to notate time signature switching consistently every measure
4
How can I transcribe music by ear?
1
Writing down chord names and understanding their function in an example
6
How do you notate a tremolo of indeterminate length?
6
triplets on full score or 12/8 (with dotted 4th as full beat)?