How to play first trill in Mozart's sonata K576? 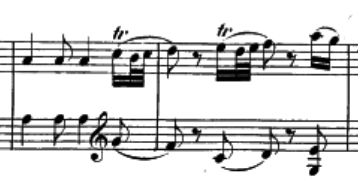 However, my piano teacher noted that the trill should start on the auxiliary note (the note above the one indicated). I also found a similar statement in Wikipedia:

piano trills
Share
Improve this question
asked May 5 '18 at 4:52

Your teacher's advice is consistent with the evidence.

The most natural source to use is Leopold Mozart. You will find that his recommendation is that all such short trills should begin with an appoggiatura.

From chapter ten which discusses trills:

That is, in this context, all short trills are played with appoggiatura and turn.

C. P. E. Bach is exhaustive and of great historic importance but should perhaps not take precedence over Mozart's father in this case. At any rate, he disparages beginning on the principal note.

Whether you play the flute or not, it is also very beneficial to read the essay by Quantz.

In your example, choosing the upper note start, you would play six notes or four, depending on the tempo. When the tempo chosen is most rapid, I am sure I have heard celebrated performers use only four. For example, I seem to remember Barenboim did this, simply adding an appoggiatura to the notated figure.

There has been discussion in comments concerning the historical basis to beginning with the principal note. The question is: what evidence of the practice do we have from Mozart's lifetime applicable to trills like those in the OP?

I will not have an opportunity to consult this work at the library until next week. In the meantime, if any reader has it, please leave a comment.

A comment about Wiener Urtext edition raised the question of how we might decide for ourselves whether to start on the upper or principal note. Frederick Neumann in his Ornamentation and Improvisation in Mozart (1986) proposes this algorithm:

This algorithm still leaves room for difference of opinion in whether the substituted ornament is acceptable.

Whatever the rules might be, surely context has to be an important consideration (after all, rules are made to be broken!). In this passage, starting on the upper note (D in the first trill) sounds fussy to me, and also less effective as it ends up resolving on the same D. Playing it as a quintuplet starting on the principle note sounds and feels more natural. That's my suggestion - you must decide for yourself what feels and sounds best. According to the KV number, it is late Mozart, so the tradition of trilling from the upper note would be becoming obsolete somewhere near that time anyway.

Not the answer you're looking for? Browse other questions tagged piano trills or ask your own question.

8
Play high C-D trill on flute
1
How to play single note trill on the piano with one hand?
5
How to play Beethoven pathetique sonata first movement?
0
How do you play this trill?
2
How do you play all the trills in Mozart Piano Sonata No. 15 K.545 1st Mov.?
17
How to play this trill in Mozart's Piano Sonata 14 (K457)
2
Descending trill in Chopin's Military Polonaise?
6
Keeping count in a solo trill
5
Playing a trill with grace note ending
3
Beethoven Sonata Op. 49 No. 2 Bar 12 trill