The whole thing started off when I was trying to play a song in the key of Cm and was looking for a scale pattern to practice first.

By the way I am new to learning to play music with less than one year experience with guitar. I am guessing the way I have described my question above makes it obvious :-)

EDIT - Thanks Tim and Uncle Bob. I think between your 2 responses I have figured out what I was looking for - correct me if I am wrong please, below is my current understanding:

When taking about G major scale and its enharmonic E minor scale as an example, both contain the same notes (in same order presumably?). As I have stated, I know how to play G major scale in 7 different positions on the fret-board in order (I learnt the scales from this video

Now, coming to the E minor scale, my understanding after reading your answer is that I can use the same 7 G major scale positions to play E minor scale with the only difference being that the start and the end of the E minor scale has to be with the note E in that pattern? And the same goes to other major-minor enharmonic scales too?

Is my above understanding correct?

As per my comment, I wasn't quite sure what you meant there. Now I've watched the video, I think the video itself is where the confusion comes from!

Here, the video calls the notes A, B, C, D, E, F♯, G... "G major scale pattern 2". I think I'm agreeing with Tim's post here when I say that that's an unconventional thing to call those notes played in that order, starting on A. I would say he's playing A Dorian - the second mode of the G major scale, with the same notes as G major, but starting on A. That wouldn't itself usually be called playing a 'major scale' in a 'learning the scales' context, where there is a strong convention that you start (and end) on the root note.

If you don't agree that a scale should start on the root note, then I guess what the video says is fine. But generally the mental steps you need to take to play a particular scale (such as A major, or C major) is locate the root note (A, or C) first, then base your pattern on that.

However you learn your patterns, you need to be very aware of where your roots are. The whole point of a scale from a musical perspective is that it is defined by a set of intervals from the root; that's what gives a piece of music a certain flavour when you construct it from that scale.

From the theory standpoint, I am given to understand that the 6th mode (i.e. 6th position of a major scale is the (first?) position of a minor scale?

I wouldn't use the word 'position' how you use it there, but yes - you could call the 6th mode of the major scale the natural minor. Personally, as I've said in my answer to Flavor of the modes in melody, I don't like to think of the modes as coming from a major parent scale - I think of the diatonic scale (i.e. the note pattern, without any particular root) as the "parent" concept, and then of major/minor tonality and modal tonality as both being concepts derived from that.

Now I would like to learn the minor scales.

First can I just double check that you know how to play particular major scales first, by identifying the root on the fretboard, and playing the major scale pattern based on that root? For example, The way I would play an A major scale would be to:

tweaking one of the diagrams from the video, that's: 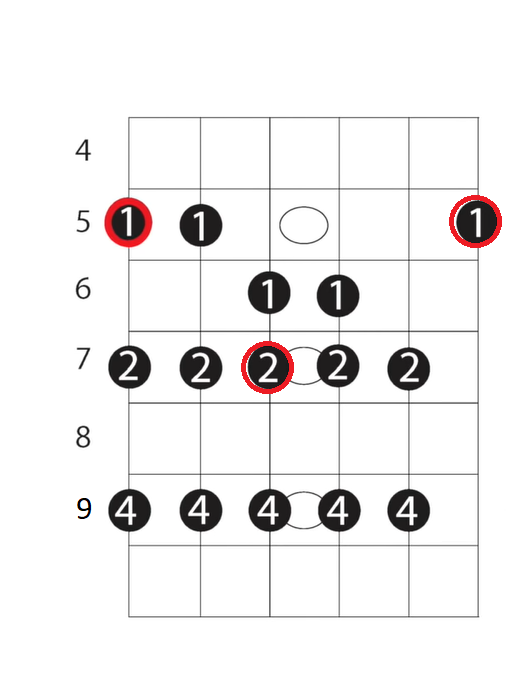 Another way to play it that's less of a stretch: 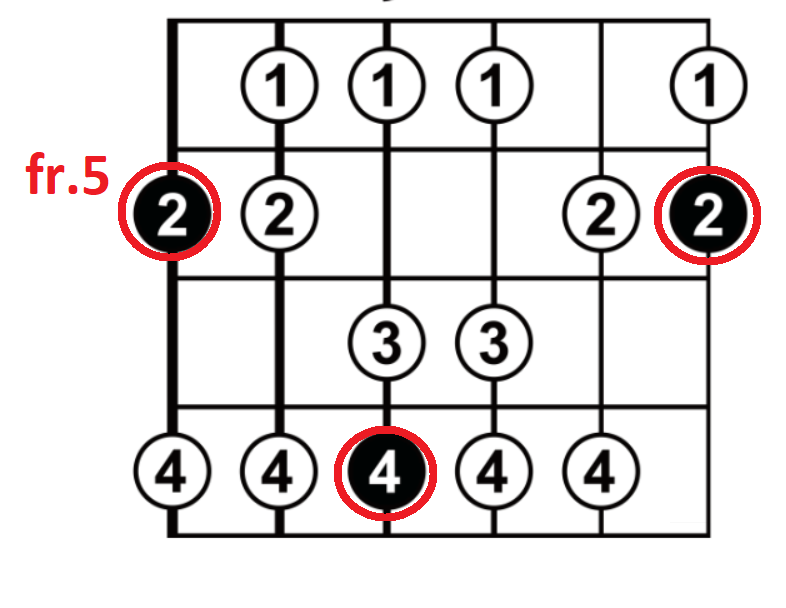 That's just another way to play the A major scale starting on the low E string. Note the roots circled in red.

Once you get to the point where if someone asked you to play "A major", or "B major", or "D-flat major", you could do it instantly, it should be just as clear what you have to do to play any natural minor scale - identifying the root on the fretboard, and playing the natural minor scale pattern based on that root. You can think of that minor pattern as being the "pattern 6" you were taught in that video, if that helps you; personally I prefer just to think of it as 1, 2, ♭3, 4, 5, ♭6, ♭7, 8, and then spot those intervals from my root (as suggested in Would it be a good idea to memorize relative interval positions on guitar?). It saves me from having to spend any more time learning scale shapes.

It might be that you've already started to think of things in the way suggested in that video, in which case my advice here might not make much sense to you. I can see that there are other sites on the internet that basically agree with what that video says, but I think it's confusing. If it wasn't, you wouldn't be here asking this question!

For what it's worth, I think a better way to describe the content of that video would be that it's teaching you 7 patterns of the diatonic scale - i.e. the diatonic scale starting at different points, each of which corresponds to one of the modern modes, the first of which (Ionian) is basically the same thing as the Major scale.

Seems like you've learned to play all the major scale notes, in order (scale) but what you've actually done is learn the seven modes of the major scale. No big deal - just confusing to you. A major scale will always start - and finish - on the root note. otherwise it's just not the major scale.

Now, we move on to minor scales. A minor minefield - excuse the pun. You have, at the moment, only considered the natural minor. That's fine, as it contains ony the notes that are in the relative major. Thus, all your '7 positions' will help. Take key C major. from what you've said, the 6th mode, starting on note A, using all the C major scale notes, will give you A natural minor scale.

So far, so good. Now the fun starts. There are two other minor scales, which contain other notes than the natural minor scale notes. Not going into that now, but maybe that fact is messing things up. if so, another question is needed...

EDIT - in response to OP's edit - There are not 7 different scale patterns!! There is one pattern, which contains all the notes from a particular major scale and also its relative minor. All in the same order, but starting at different places. You may need to familiarise yourself with modes, which effectively this is. They are sets of notes basically from a major scale, where if one starts on the root of that key, one is playing the Ionian mode. (The major scale). Start on note no.6, and it's the Aeolian mode - (the natural minor).

Start on the 2nd note, it's the Dorian mode, etc. But you ask about minor scales. There are other minor scales, too - harmonic and melodic. Both of which use other notes than those from the relative major scale. Not for discussion here, but will further confuse when tackled!

I've just watched some of the video lesson. He really should be talking about modes, not patterns of a major scale, which is what they're not, really. I find the video not that helpful, and rather long-winded, but that's just me!

7
Would it be a good idea to memorize relative interval positions on guitar?
3
Flavor of the modes in melody

6
What are the patterns of the minor scales
6
Approach to learning arpeggios for chord-tone soloing (shapes or notes)
2
Modes, Scales, Getting The Tonality/Color Of Said Modes, Etc
3
What are Guitar Scale Patterns?
5
Subpatterns within CAGED guitar patterns
1
Right approach to learn major and minor scales
11
minor tetratonic scales
0
Standard 12 bar blues shuffle
2
How are guitar scale shapes/patterns named?
5
What to do after learned scales positions?