How “hard” to read is this rhythm? A rhythmic comparison

I've recently heard a rhythm that sounded like this

It seems slightly tricky to play it perfectly, so I wonder if I could somehow improve this writing to make it more natural and "readable". For example, what if I simply wrote 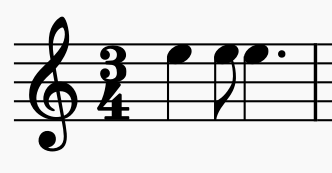 and added some rubato in the last two notes? Could that mimic the first rhythm? Essentially I want to slow down the second note a slight bit but not lose tempo.

What would be the best approach here?

Edit: Following @endorph's answer, I realised these rhythms are actually identical, making the question slightly pointless. However, if you follow the linked audio, I would gladly hear your opinion on how to transcribe that particular rhythm.

Minor nitpick: in your first example, the semiquaver should precede the minim. That will improve readability:

The second example also does that, but using quavers.

If you put them into a notation program and play them back, they should sound identical.

Philosophical aside: The point of notation is to communicate.

There are many styles of music where an instrument might play slightly ahead of the beat, or behind the beat. There are many other styles where the tempo itself is very fluid. In these cases, you don't want to notate stylistic choices too precisely. It's too hard to read.

As an example, I'm currently transcribing a choir piece. There's a ridiculous amount of rubato, pauses, and other shenanigans. Almost none of that is in the actual notation, beyond a "rubato" direction at the start. That's sufficient to communicate. Anything more detailed would likely harm the performance.

Notation is designed for a human performer, not a computer. We don't try and notate every nuance of a performance, and we expect the performer to understand the piece sufficiently to reproduce stylistic details that are not explicitly notated.

I think a dotted quarter followed by an eighth tied to a quarter would be much easier to read. This doesn't break up the basic quarter-note pulse. The performer (as noted by endorph, supra) will add any subtle rhythmic changes, such as rubato, depending on the style of the music (or the performer's mood which always happens.)

Not the answer you're looking for? Browse other questions tagged notation composition rhythm songwriting or ask your own question.

0
Help! How would you write this rhythm (audio linked below)?

3
Music Composition: Which rhythm is easier to read?
7
How to play this rhythm precisely?
2
How do I write this rhythm correctly?
0
How to read and count this rhythm ?
2
How do I read this note and count it out loud?
3
Using rhythmic solfege to count a dotted eighth - sixteenth rhythm
8
How can I count this unusual rhythm?