What is the function of this slash chord in a Swedish Traditional song?

I found the following chord progression 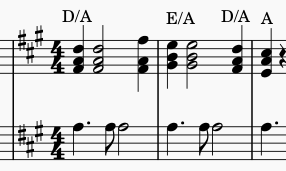 I do not entirely understand what the E/A slash chord is for and its functional use. Is this a dominant chord with an added bass note or is it a ninth chord with omitted third in the tonic? If the former, why is not an e used in the bass? Is it for keeping the bass line smoother?

Could the chord even be understood as a triple appoggiatura?

The bass A is a pedal point.

If we go by the key signature, it is a tonic pedal.

This progression reminds me of something similar, but in classical style...

As you can see it also uses a dominant chord E7 in the treble over a tonic A in the bass.

This classical progression is used to affirm a tonic, and it might be used at either the beginning of a piece to establish a tonic, or after a modulation to extend the new key for a bit. The tonic affirming aspects are obviously holding the A in the bass, but also the D, E, and A chords played above that are the primary triads of the key and include all tones of the key.

In terms of analyzing function, a pedal is usually either on the dominant or tonic scale degree, and it would simply be analyzed as V or I. All the chords and movement above a tonic wouldn't normally be analyzed. Although, the stuff above a tonic often moves by conventional voice leading and harmony.

Your progression is a little different, because it starts with a D chord...

I think it more or less does the same thing as the classical progression. It affirms A as tonic, but I think I would reduce and analyze it as... 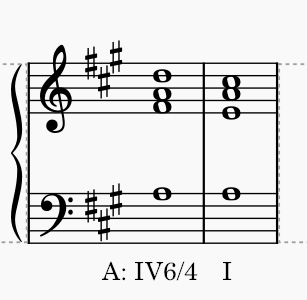 That kind of progression - I IV6/4 I - using a pedal 6/4 chord is sometimes called a tonic prolongation. It's another way to affirm a tonic.

Could the chord even be understood as a triple appoggiatura?

By my reckoning, yes, or maybe it should be called an auxiliary chord.

Have you ever heard the idea that the bass provides the harmonic foundation, or "follow the bass" to understand the harmony? I think that takes us a long way with understanding this question. In these progressions the E/A is not functioning as a dominant, because the bass is not moving off the tonic. The bass is telling us A is the tonic.

As described in the previous answer linked in the comment by Elements in Space:

E/A means to play the E chord with an A in the bass.

That answer gives several reasons why this notation might be used. In the case of your excerpt, it's most likely a pedal point, "a sustained tone, typically in the bass, during which at least one foreign (i.e. dissonant) harmony is sounded in the other parts". (The G♯ of the E major chord is dissonant with the A.)

As well as being a pedal point - as previously pointed out, since it goes on throughout, it could also be regarded as an ostinato. The pedal point is a single note that keeps getting repeated, regardless of chord - or even whether it belongs to the prevalent chord, whereas an ostinato is a repeated pattern - here a rhythmic pattern on a single note A. So I suppose it could even be called a pedal point ostinato!

This example is a bit complicated—I suspect it's a moment of modulation from another key, like maybe D major. At first I looked at the excerpt and thought, "A major?! Then why does it start with a D chord? It feels like it's in D!" Then I noticed the staff continuing to the left; this is a change of key signature and time signature. Perhaps the preceding section was in D.

If that were the case, then an E chord is easy to explain; it is in fact the dominant of A, and helps tonicize the new key. So we ask "why not have an E in the bass? Or any chordal tone that's a member of an E chord, rather than an A?" This ventures into "because, that's why" territory, but one speculation could be: Maybe (despite the change in key signature) we're not going to spend much time in A major. Maybe we want to keep a sense of A as the the dominant of D. Since the pitch A is a common member of both the D and A chords, sustaining it through the E helps keep a sense of "A as dominant" even through the brief V of A.

A series of chords over a 'Dominant Pedal' is possibly even more common.

11
What does the chord notation X/Y ("slash chord") mean?