what is the correct musical term for arpeggios where the notes are left ringing?

Hi I am wondering what the correct term is for play a sequence of notes where you leave all the notes ringing together. I'm not talking about rolled chords, I'm talking about having a larger amount of time between the attacked notes than that.

You can use English: let vibrate Or Italian: l.v. lasciar vibrare

Uhm, arpeggio? "Leave all the notes ringing together" (the effect depending on the sustain of the respective instrument, so one pretty much needs a percussive instrument) is rather the definition of arpeggio. Otherwise you have something else, like a broken chord.

You cannot arpeggiate on a monophonic instrument (like voice or most wind instruments).

From the perspective of piano, a measure that has a clear arpeggiation may or may not have an indication to use the pedal, which would pretty much leave every note to ring until it was released. Not pedaling would, in turn, have a more staccato effect. In my experience, it's either called "pedalling," which is fairly straightforward, but which only relates to piano.

The better series of terms to differentiate how notes are sounded (across any instrument) would be 1. staccato, 2. marcato, and 3. legato, for 1. short, 2. "normal," and 3. "flowing into one another," respectively. To my knowledge there is no specific term when an arpeggio or any other named phrase is called to be one of these three, so I'd merely put what you're talking about at "an arpeggio played legato."

An Arpeggio is when the notes of a chord are played (and released) consecutively, (normally low to high):

When the played notes in the chord are not released, it called an Arpeggiato:
[see Dolmetsch Music Dictionary : Ar - Ar]

On a brass or woodwind instrument, you can play an arpeggio but you cannot play an arpeggiato. But on a guitar, glockenspiel, or an actual harp, an arpeggiato is much easier to play (as you don't have to dampen the previously played notes). On a piano either is easily playable.

I think there is no specific term for a slow arpeggio.

The basic arpeggio - as an embellishment - is to hold the notes...

...but there isn't really a standard for how fast to play it.

An option is notate the speed you want and use ties... 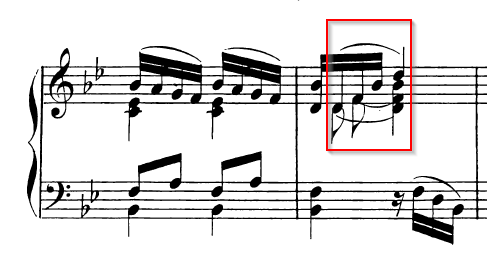 ...from Kornlein, Morgengruss. The separated chord tones in that example anticipate the beat, but you could notate something similar that starts on the beat.

Not the answer you're looking for? Browse other questions tagged chords terminology or ask your own question.

22
Is it possible to find the correct chords from melody notes alone?
3
What are guitar dynamics?
0
What is the proper name for a sequence of durations?
1
Is there a formal name for tones occurring at the same instant?
11
What is the term when two people sing in harmony, but they aren't singing the same notes?
4
What is the technical term for the note names C, D, E, F, G, A, and H?
0
What is the term for a machine that helps record and layer tunes?
9
I'm having trouble hitting all keys of a chord together. Are there any methods that can help me learn that?