Some of the music i'm trying to write seem only to fit in to some of these very obscure time signatures simply to be able to fit the right number of notes in rather than them being used because they have the 'feel' of that obscure time signature, they instead feel like 4/4 or 6/8 bars with 'extra' 16th notes in them, so we have 13/16 bars and 17/16 bars like this: 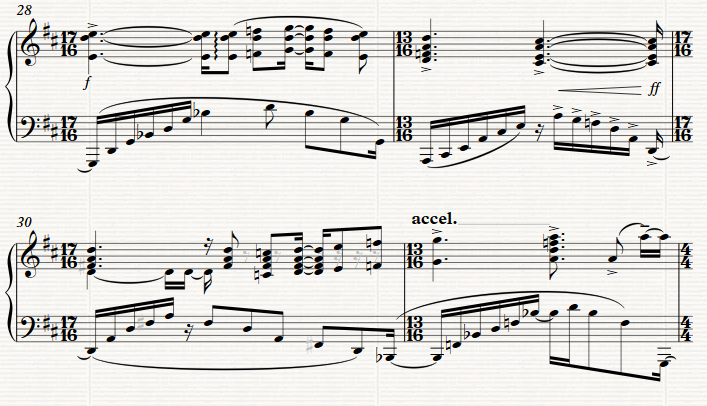 Currently I have them grouped in 6 6 5 for the 17 16 bars and 6 6 1 for the 13 16 bars, though after discussion with my piano teacher, we concluded that it looked wrong, but couldn't conclude how to make it right after discussing just these 4 bars for half an hour, and she insisted that using 4 4 4 4 1 and that 6 6 1 bar was incorrect despite it helping to simulate the idea of a '4 4 bar with an extra 16th note'.

Any tips on improving the readability and making this more 'technically correct' would be greatly appreciated, even just a better note grouping system would help.

EDIT: I have tried the suggestion involving using normal time signatures but adding grace notes to imply the same effect but making it easier to read and I've written it like this: 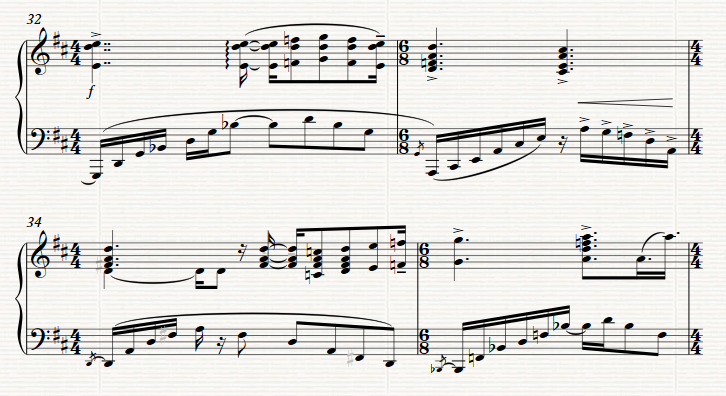 I'll be able to discuss the other alternatives such as using 7:6 tuplets with my piano teacher later this week, since i need to be sure that in bar 32 and 34, the last tenuto notes are very tenuto indeed ( they sound only a little bit shorter than the quavers ).

P.S. Sadly the music software i use doesn't allow irregular tuplets such as 7:6 and 6:5, which might have been useful, but i should gain access to a full version later this year and i'll be able to experiment with using them where appropriate e.g. using a 6:5 tuplet for the last 6 16th notes in bar 32 and 34, to show they should be played just a little bit faster (and thus fit it into 4 4)

A different (albeit difficult with a program like Sibelius) approach comes from Olivier Messiaen's notion of additive rhythm. With additive rhythm, Messiaen could use (as one example) a common time signature like 4/4 but actually have seventeen sixteenth notes in the measure instead of just sixteen. This added sixteenth note thus doesn't really destroy the feeling of 4/4 time, it just slightly elongates one of the beats. Wikipedia describes it as "lengthening individual notes slightly or interpolating a short note into an otherwise regular rhythm."

As I said above, this would be difficult to do in something like Sibelius. (At least I assume it would be...I don't use it.) LilyPond would be much better suited for a project like this.

But even if you don't like this concept, you may consider trying to beam things as if the 17/16 bars were in 4/4 and the 13/16 bars were in 6/8. At the very least, it would give the performer some more common beamings to deal with.

Things certainly get tricky once we step outside the common time signatures and the solution to choose becomes more and more subjective the further removed you become. Generally speaking, groupings are used to convey phrasing and allow for easier reading. Those are the two things to really consider when trying to notate your music, which it seems you understand at this point. Tradition note groupings usually follow a standard for readability a little more than phrasing. For example, in 4/4 you are usually expected to group the first two beats and last two beats, with some exceptions (like dotted quarter-dotted quarter-quarter), but when you have heavy syncopation, the expectation is that you notate based on readability, not phrasing, with the understanding that the rhythms encountered are against the beat.

We typically find that odd meters are divided by beats in sets of 2 or 3 subdivisions (the denominator of your time signature). Sometimes you will find groupings of 4 or 6 but this can be interpreted as combining 2 sets of 2 or 3. So we don't typically find a grouping of 1 beat, not that it's necessarily wrong, just that it doesn't follow the convention. The problem ends up being that there are a couple ways to interpret the term phrasing: 1) The way the part that is being notated is phrased; 2) The way the time signature is structured. As I mentioned above, sometimes the approach is to spell things out to delineate your beats, so writing syncopation against the beats doesn't necessarily feel like you are notating the phrasing as outlined in number 1 but it does convey number 2 and could be argued that the syncopation against the beat actually better conveys the phrasing than to base your groupings on the part/line you're playing.

So making the decision based on phrasing can become difficult as to whether you choose to group your notes for a given part or within a more approachable meter for the purpose of syncopation.

I find this to be more challenging than grouping for phrasing. Typically we find that odd meters are just harder to read in general, so it's difficult to choose what the easiest way to write something that will still be difficult to read would be. I would ultimately suggest that finding as much consistency as possible is going to be your best bet for readability. If it's going to be difficult either way, you want to make sure that once it's interpreted, it doesn't need to be reinterpreted every new phrase/measure/etc. I find that it's easiest to read smaller groupings when reading odd meters, so I might prefer to read two sets of 3 1/16 notes instead of one set of 6, or potentially three sets of 2 1/16 notes if that more properly spells out your phrasing.

One suggestion I received from my composition teacher back in college was that it may be easier for players to read if you just leave everything in 4/4. I was writing some stuff that had no consistency to the meter, which I just left in 4/4, and he was suggesting that instead of reworking the piece to have the meter change to match the phrasing, which would be changes pretty constantly and not back and forth between two meters like your piece appears to be doing, it would potentially be easier to read in 4/4. The thought was that the reader could just focus on playing what's there, instead of having to think about the next meter they were approaching every measure. This approach could be helpful to some extent but it doesn't really tell you anything about what's happening in the music that you're reading, so you would surely want to supplement that with phrase markings.

When you're making your decision, you'll want to determine who will actually be reading this and in what context. If you will be giving it to a performer to have them play it, then you would probably want to make sure that your phrasing is well conveyed, leaving as little interpretation to the player as possible. If you're writing it out for someone to sightread, then you will want to make sure that it's as readable as possible, preventing them from getting confused by odd groupings. If you're just writing it out for yourself, you should probably just write it out however it makes sense to you. On the whole, you just want to make sure that whoever has to read it won't have to guess what your intent was when writing it.

"Normal" time signatures were developed along time to fulfil, in a clear and concise way, most of the needs of the music that was being written. If new music does not fit into that paradigm it doesn't make sense to try strictly adhere to the conventions, particularly if that hinders legibility and clarity regarding the intention of the composer.

For me, the example you provide seems clear enough, so I don't see any strong reason to do it differently. Unless you wish to stress certain specific accentuations, splitting into multiple bars with changing time signatures would make a more cluttered and difficult to read score. But if you find that 6 6 5 and 6 6 1 better conveys your intention, that should be your criteria, not (supposed) "correctness".

Space arrangement of note groups within the same bar (e.g. more whitespace), if you're able to do it with the score typesetting tool you're using, may perhaps be used to further improve readibility. Also don't be afraid to text annotate your score if you find it necessary to make your intention more clear (if what you want is that the phrases be played as "two groups of 6 and one additional group of 5 or of 1", consider making a small initial footnote in the beginning of your score saying exactly that).

Of course, in simpler time signatures you would change the signature to one with an equal bar length but different beat lengths, however this does not strictly apply to irregular time since there is no defined way to group notes.

Not the answer you're looking for? Browse other questions tagged notation composition sheet-music or ask your own question.

4
Two rests and a note that isn't played? misunderstanding ties
3
How is the tempo and time signatures related?
4
13/8 notation: how many bar lines for readability?
16
Why use odd time signatures?
2
How to denote a volta that should only be used after jump back to Segno?
3
Quintuplet over 3/16th
4
Time Signature Dilemma, should I change the time signature for my Scherzo?
2
Problem Understanding Specific Rules of Adding Rests
9
Orchestral score has inconsistent time signature changes and note lengths