What is Sanz's tablature for the baroque guitar?

Gaspar Sanz had a tablature system for the baroque guitar which features a mapping between alphabetical letters and chords. From the linked page:

Sanz's tablature is remarkable in that it is topologically correct, representing the first string in the lower line and the fifth string in the highest printed line. In this epoch, guitars only had five strings. It also features the "italian alphabet", a shorthand system that assigns a chord to each letter, so that melodic chord progressions can be written and read very neatly (with rhythm information) as a simple sequence of letters, a concept related to the recent Nashville system. For example, there is a "Zarabanda francesa" (french sarabande) which includes the sequence CIFI+H2+G2K2IFCM2N2CAIC, which means:

There are 2 things which confuse me in the above:

as opposed to a mirror image of them, as other tablatures of the time (and previously) used: 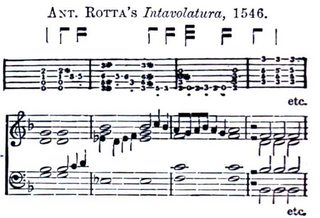 or notes without indication of string: 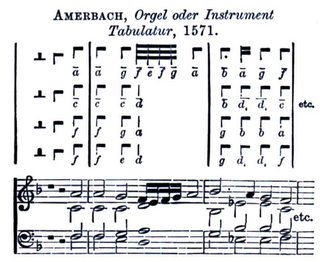 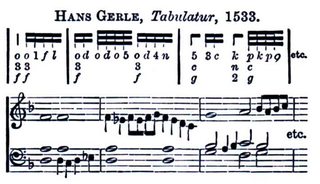 As you can see, rhythmic information is indicated by a combination of super-script notes and downwards/upwards 'ticks' (indicating strum direction):

Note: that's an error on the wiki page. C indeed refers to a D chord, not an A.

The Wiki article has a link to the Biblioteca scan of his work. Book 1 is mostly strummed using the alphabet notation. Page 27 & 29 has a table matching the letters to tablature.

www.donaldsauter.com/gaspar-sanz.htm discusses his tablature, and renders Book 2 in modern tablature.

On the tablature, rhythm is indicted by notes above the score. They are also on the strumming pages, but more compactly.

Not the answer you're looking for? Browse other questions tagged guitar notation tablature baroque-period or ask your own question.