How would you notate a non-accent?

There's a variety of notations that indicate various types of accent - tenuto, staccato, martellato and the like.

But what notation would I use to indicate that I want notes to be deliberately unaccented. For instance, in a piece for brass performance, that the notes should start with breath alone, rather than tongued, so the attack is slow. This is to write ensemble textures that change smoothly over time rather than having thumps where players join in with tongued attacks.

I realise I could write text next to the passage, but that method wouldn't work if I want only certain notes within the passage to be unaccented.

There's a marking—borrowed from poetry I believe—that has become relatively standard to indicate a note that should be unaccented. I've seen it in Schoenberg especially, but some other composers as well, and it looks like this:

It's used specifically for notes that would normally have some kind of metric emphasis (such as, in this example, the downbeat of a measure), when that emphasis should be avoided. The marking exists in notation programs, however I think that's because it's a standard organ-specific marking for using the heel of the foot rather than the toe. Although the "heel" version of the marking always goes on the notehead side of the note, I've only seen the "unaccent" written above the note regardless of stem direction.

However, I'm not sure this is the best marking for your specific situation, because I don't think a tongueless attack would necessarily be my choice just to take away a default sense of accentuation. To me, not using the tongue seems like a bigger deal than that, and I would be tempted to use a different notehead to represent it. Various types of tongueless attacks (and or pitchless air-noise) are sometimes indicated like this:

Or with a similar notehead but a vertical line instead of diagonal. However, I really think you could use any kind of notehead (such as a triangle or a diamond) to indicate the effect, as long as you don't use it for a different meaning elsewhere.

The only potential problem is that none of this is standard or common enough to just use without explanation. You will have to either explain your notation in the preface to the score or as a footnote to the first instance of it.

Beware of the 'bend' articulation @Pat Muchmore suggests. Brass players in particular are used to this meaning something quite different. 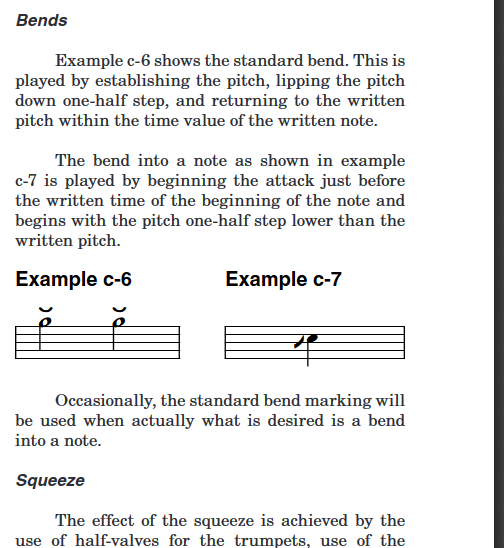 It is typical (as a comment above notes) for brass players not to accent notes unless instructed otherwise, and far from being restricted to "top brass players" this is standard technique which is frequently taught very early to beginning students. It may need to be emphasized to players without much experience or proficiency, but such considerations are typically for a conductor (not transcriber).

I'd go so far as to say that a trained classical trumpet player will know exactly and unambiguously what you intend regarding accents if you follow what I have outlined; the vast majority of published classical works use these conventions.

Not the answer you're looking for? Browse other questions tagged notation articulation or ask your own question.