Am I observing subharmonics using this method on guitar?

Are we hearing a subharmonic? Friends and I hear a note that is lower than my lowest unfretted string on my standard acoustic guitar with standard tuning when I use the following very simple, easy method, pictured here: 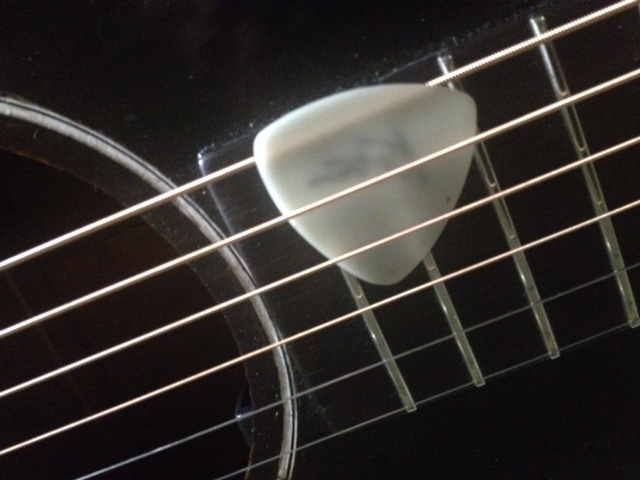 As seen in the picture, a guitar pick is placed on top of the bass E string and under the next string (A string) in a manner similar to the way folks usually store a pick near the top of the fingerboard. I wedge the pick in between the E and A strings so that the edge of the pick rests on the fingerboard and the A string pushes down on the pick. The pick pushes down on the E string in this manner. (If the guitar action is too high to get the wedge affect, a piece of light cardboard can be placed under the edge of the pick that contacts the fingerboard, in order to shim it.) Then the E string is gently stroked or plucked with my finger. We hear a very low note that is much lower than the E unfretted string would make.

The resultant note is constant frequency, with unremarkable amplitude falloff in a fraction of a second or so. It does not warble or "beat", as far as we can tell. It sounds an octave or so lower than the bass E string.

I am wondering and investigating if it is the brain filling in the "missing fundamental," which is a known phenomenon of human hearing. I cannot find an example of a mechanical system that will produce subharmonics.

On my electric guitar I get almost exact octave drop with a one millimeter Ultex pick, lighter picks produce smaller changes.

Regarding the point about half node presented in the other answer, I believe the pick stays connected to the fretboard and strings all the time. If you pluck the string hard enough that the pick loses contact with one of the parts, you get a buzzing sound not unlike fret buzz and the pick does not stay in place.

Based on the answers to my question about subharmonics, I think yes, this is a subharmonic. As ojs's answer suggests, you are creating a compound vibrating system out of the two strings and the pick. (Do be scared, so far this is just fancy words describing everything that's already been said)

Think about the whipping around of a string or rope or hose that you've played with in childhood. Now slow down the movie. Sometimes parts of the string are moving up while other parts are moving down and always with some amount of spin around the axis.

The pick wedged against the string creates an artificial node in the string's vibration, but also in a way it's making only half a node because the string can lift off the pick a tiny amount since there is no obstruction in that direction.

The pick absorbs some energy from the pressure and impact of the first string and sets about vibrating, too.

Some of the vibration from the pick is sympathetically transferred to the second string, giving rise to a resonant vibration.

The two (or three) different parts vibrating can easily give rise to the intermodulation effect where difference pitches (aka Tartini tones) are observed.

But I think, sadly the real conundrum for most guitar players will be: "If my pick is wedged in like that, how on earth am I gonna pick the string?" :)

Not the answer you're looking for? Browse other questions tagged theory guitar-effects or ask your own question.

21
Is it possible to create the illusion of a sub-harmonic?

6
using multiple stereo effects
2
Using Amplitube for iPad on stage
8
Is this disco/funk guitar effect a wah-wah pedal or something different?
5
Using an amp-simulation pedal with a real guitar amp
7
Describe the 4 cable method for connecting a multi effect pedal to a guitar amp
3
Using separate fuzz and octave pedals
2
Compensating for brass wound guitar strings when using a sound hole magnetic pickup in an acoustic guitar
1
What creates this swooshing guitar effect?
5
How is this octave jump achieved on electric guitar?