I am writing a piece and I am trying to write a D major chord that is lower than the open E major chord on guitar. How should I do this?
I am relatively new to guitar and I have no idea what this chord might be.

If you are wanting to stick with standard tuning, then obviously there's no note lower than the low E in the open E chord - but as a chord, this D/F# (or 'first inversion' of D) might give some impression of being lower, partly because two of the strings (A and D) play a note that is a tone lower than in the open E chord:

Here's a video tutorial on how to play it....

...but to make it sound low you might want to just play the bottom 3 strings - in which case it's a very simple, one-finger chord:

Use a Drop-D tuning along with the traditional open D-major chord. Or alternatively try a DADGAD tuning and finger accordingly.

You have to re-tune the guitar strings so that they are low enough to play the notes you want.

The technical terms for this is scordatura although in common guitarist lingo it's usually called alternate tuning.

You need to know how to indicate it in your score. There are two basic ways: tab and staff notation.

In tab the lines representing the strings should give the letters for tuning. Below are examples showing standard tuning and "drop D" tuning where the low E string is lowered a whole tone. 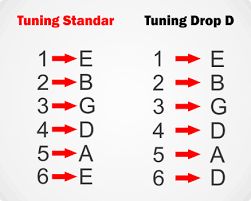 In staff notation you put some indicator at the head of the staff for guitar. Violin and guitar scordatura have different indications, but I thought it would be instructive to show both:

...note the re-tuned string number give in a circle along with the tone letter it should be tuned to (Bach, BWV 998.)

...violin family scordatura lists all the string tunings as whole notes on staff - with clefs - before the actual music staff (Kodaly, Op. 8.)

Using standard tuning, it's really not going to happen. To make it sound lower, the bottom string at least is going to be tuned to D, which means that any other notes played on that string then need to be fretted two frets higher, which may/not cause other problems.

By tuning the whole guitar down a tone, but playing the rest of the song two frets higher, you can find that low chord. Or - play the whole song a tone higher in standard tuning, and instead of the 'low D chord', make that chord an open E.

Try this chord. I've heard it called an "inverted root", or in this case an "inverted D". But the reverse chord analyzers call it "A6sus".. Just try it in your song and see if it works.

Standard Tuning, fret it like the lower portion of a barre chord:

I probably wouldn't know it, except that it's used by Weezer on the Blue Album in "The World has Turned", which is how I came to know of it and the only place I've ever encountered it.

You can hear it for yourself in this guy's guitar cover. FWIW I'm not endorsing this as a great guitar cover--I actually disagree with his 3rd chord, but he gets the second chord correct, with the fat, 'lower than E' sound you might be looking for..

..which makes it sound a little lower. It works well in situations where you're walking down from a G, similar to the Weezer song but outside the context of barre chords. But since this version is open-fretted, it sounds a little bright--which of course you may prefer!

On electric guitar, you can play the E chord and whack down on the trem bar. The chord will go out of tune on a Strat but will stay if the trem is a Bigsby.

3
Should I try to perfect every song I play at open mic?
20
Why is the first inversion of a C Major Chord very rarely used on guitar even though it is easier to play?
0
Is there a guitar chord lower than E minor in standard tuning?
2
Confusion about C Major Chord on guitar
3
How do I determine the "bass" tone of a major or minor chord?
0
How to Play any Major Scale on Guitar
0
Open G guitar, better position for major chords
6
What are the key ideas behind a good bassline?