I've never played any Shostakovich before, and I was curious about whether/how I should go about pedaling in his preludes and fugues from Op. 87.

I'm treating the pieces like Bach, but there seems to be some impossible lines unless you pedal. I would appreciate some suggestions for how to pedal in these types of fugues, as the score doesn't have pedal markings, and I want to pedal cleanly (to be honest I avoid pedaling unless the score dictates it, so I don't have a great sense of its capability beyond what composers specify).

See the attached image for an example from no. 4 e minor fugue.

Specifics from the excerpt: The A and C# in the left hand are tied to the next measure when the LH should then play F#. Meanwhile, the RH plays the dotted-half A on beat 1 and then the dotted-half D on beat 2.

If my focus on pedaling is missing the intention of how Shostakovich wrote this, then feel free to clarify how I should approach these sorts of "awkward" phrases.

I understand these are questions better suited for a teacher, but I don't have one right now, so any guidance is greatly appreciated.

Thank you for your time and help. 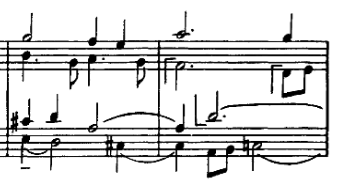 There is no point in avoiding the pedal just because the form of a piece dates back to the harpsichord era.

Shostakovich wrote 250 years later, in the era of Rachmaninov, Horowitz etc. His fugues treat the instrument like the modern concert grand it had become, and that definitely includes using the pedal judiciously even if there are no explicit marks. (You'll notice that some effects, like the pedal points in the E major prelude, are virtually impossible to achieve without a modern grand piano.)

So yes, pedal and no pedal can achieve quite different effects on the same piece of music, and it is always advisable to use or not use it as a deliberate choice. And yes, many players use the pedal to mask insecurities in their phrasing or attack. But a blanket ban is inappropriate for 20th-century music.

Edit: How to play these types of bar depends on your instrument and your physiology.

My own span is enough to hold the right hand f#+a comfortably and barely to catch the left hand a+d without arpeggiating, so in a pinch I could play bar 18 without pedal by assigning the long d to the left hand. But bar 19 is beyond anyone who can't reach a 12th, so you'll have to use the pedal. A couple other places (b. 61, 112, 127) force your hand in a similar way. So you'll have to work out a good balance between catching all notes and separating the voices anyway, and you might as well use it for bar 18, too.

Other than that, I'd probably avoid the pedal in the pp section and for the second theme, because it tends to blur fast scales; but definitely use it for most ff passages. Many of the fugues in op. 87 descend into nothingness, but this one is about the gradual rise from 0 to 100, so the final chords really profit from the enhanced resonance that the pedal adds to the sound.

Not the answer you're looking for? Browse other questions tagged piano technique practice fugue or ask your own question.

7
What is a good warm-up for the trumpet/cornet?
12
Is there piano notation for finger sustained notes (as opposed to pedal sustain)?
7
Pedaling in Satie's Gymnopedie #1
16
What does a straight line followed by a sharp point mean in a piano score when under notes?
4
Pedaling in La fille aux cheveux de lin
2
Do rest days aid in developing strength in facial muscles used by brass players?
1
Piano Memorization Techniques
1
How to keep going in the fugue
6
Piano pedaling notation
2
Chopin - Étude in A minor, Op.25 No.11 "Winterwind" Pedalling Discrepancies Between Sheet Music and Performances