Is it possible to have sharp/flat notes in a music piece composed in the key of "A minor"?

When I was reading sheet music of Niccolò Paganini's Caprice No. 24 in A minor, I saw some sharp and flat notes. 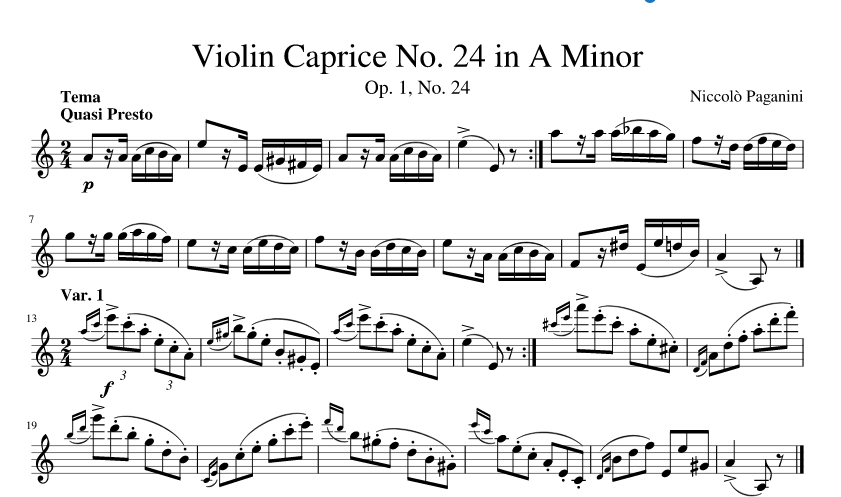 This raised some questions for me. Based on my researches, I also found out that the caprice is not written in A Harmonic minor scale or A Melodic minor scale.

Can a music piece written in A minor contain sharp/flat notes??
Is it possible that the caprice is out of scale in some parts??? While it is totally in A minor.
I also read this post, but was not clear enough.

I am new to music theroy and apologize if I used wrong technical terms.
Any thoughts would be really helpful.

Music can, and often will, have notes in it that exist outside of the scale of the current key. We call these outside pitches chromatic, and it's these chromatic pitches in the Paganini that led to your question. (In contrast, we would call music that only uses the members of the A-minor scale diatonic, which basically means "in the key.")

But in this example (and in countless others), these chromatic pitches do not up-end the sense of A as tonic or of A minor as the key. Instead, they're just flavoring notes.

Think of it as you do language. Imagine I say, in English:

That statement is still in English; the existence of a single foreign word doesn't mean the sentence is no longer in English, nor does it really mean that it's simultaneously in two languages at once. It's the same with this music: there are occasional "foreign" tones, but it's still clearly in A minor.

I'll also say that music is not really written "in scales." Rather, scales are a convenient way for understanding collections and for helping instrumentalists build technique. So try to think less of a piece of music being "in a scale," and focus more on the tonic pitch of that key.

"A minor" is a key. A piece being in a particular key means that the harmony will tend to resolve towards that note/chord, and mostly use notes from the associated scale. But almost all music involves borrowing notes from outside that scale.

"A natural minor", "A harmonic minor", and "A melodic minor" are scales. In particular, the harmonic and melodic minor scales (as common played in technical drills) are sort of artificial constructions. They exist to illustrate why certain alterations are common in minor keys. You don't "write a piece in" harmonic or melodic minor.

You've fallen, as we all have, into the trap that says 'this is in key X, so every note in it must be from the scale of X'.

Not so, by a long whatever-it-is!

The basic notes of any piece will consist of those from scale X, called the diatonic notes, and that leaves just five other notes which are non-diatonic. Otherwise called chromatic. That means coloured. They often get used to literally colour the melody, and stop it getting too predictable. When we hear those chromatic notes, our ears hear them and we think 'mm, they don't really belong, but nevertheless...'

Harmonic and melodic scales are artificial 'melodies', but many pieces do borrow these in a melody that comprises short scales. There is in fact really a small tendency for rising melodies to use raised 6th and 7th notes and for falling melodies to use the original unraised 6th and 7th. However, this is of course not a rule, nor is it theoretically the most euphonic. So it is no surprise at all to see the raised 6th and 7th in the falling scale in bar 2. In fact, a 7-6-5-1 melody is very common, just like a 5-6-7-1, and in the minor scale the 7th is almost always raised in such a melody. The 6th is usually raised as well, though if you do not it sounds fine too; it will sound different (strongly minor) but not unpleasant.

But there is a bigger misconception that I want to address. When a composer says that a piece is in A minor, it does not mean that the entire piece is in A minor, even in the composer's mind! And indeed it is not the case even in this short section that you have posted here. Change of key is also known as a modulation. Let us analyze this properly:

Bars 5 to 6 are in D minor. Chords are V, I. Note that the chord in bar 5 is A major as a chromatic change from A minor in bar 4. The B flat perfectly fits here as the 6th note in D minor. This is a very common modulation (to what is called the subdominant key).

Bars 7 to 8 are in C major! Chords are V, I. C major is the relative major for A minor, so it is a common target for modulation. How did the key get from D minor to C major? Well, one might argue that D minor is the pivot chord, being in the keys D minor and A minor and C major, so it facilitates the human mind from perceiving that the subdominant modulation was just a temporary one and that it is now jumping from the original key to the relative major.

Bars 9 to 12 are back in A minor, in my (subjective) opinion, and the chords are #VIIdim7, I, VIaug6, V, I. Here #VIIdim7 is a typical diminished 7th chord, and I feel that the melodic progression calls for the G# in the chord even though it is not in the melody, hence the "#VII" indicating the raised 7th from the minor scale. The (VIaug6, V) progression are in a single bar, as a quick move towards the final goal of I. Note that (VI, V, I) is a common progression, though here there is an additional note that fits into the melody because it is just a chromatic step away from and resolves to the next note E. Note that the general flavour will be unchanged if you omit the D#. (I have changed the chord identifications here based on Aaron's helpful feedback that my notation was not conventional.)

After that, we have a repeat of the chord progressions, with bars 17 to 18 in D minor, bars 19 to 20 in C major, and bars 21 to 22 in A minor as we described above. And these bars also confirm the earlier analysis.

Finally bars 23 to 24 end the section in A minor, with chords II, V, I. This chord progression is also a common progression.

Most classical and romantic music are built around the chords I, V, IV, II, VI, III, in roughly that order of prominence, with the notes taken directly from the scale. (Note that some theorists use uppercase and lowercase to denote whether it is a major or minor chord, but I do not want to do that as I feel that the musical flavour arises from the scale and not just the chord itself. For instance, in the minor key what I write as chord II would be notated as ii(dim) in another convention, but the underlying flavour is still the same as the (II, V, I) in the major key, just that it sounds minor.)

As you can see above, we have indeed fully explained all the chords and accidentals used in this section of Paganini's piece; Not a single accidental was left unjustified!

Not the answer you're looking for? Browse other questions tagged theory scales key key-signatures accidentals or ask your own question.

25
Why is there a key signature if I never play those notes?
3
How can A minor key have a sharp chord in it?

3
Piano Accidentals and Key Signatures
4
Sharps vs Flats - Formula to determine correct sharp and flat notes in a scale
14
Why do the notes of Melodic-Minor Scale change when you play it in descending order?
2
In difficult keys, is it really best to think in terms of accidentals?
15
Why are accidentals not additive?
2
Efficient exercises to Learn Scales
3
Why harmonize non-diatonic notes with major 3rds above, in a "minor key" context?
7
What does it mean when a piece is written on a specific scale?
3
Keyscales & Melodies