Is this the correct numeral for the given bass?

Pardon me, I'm pretty new on the whole "part writing from figured bass". Based on what I know, I believe that a 6th means 1st inversion? (correct me if I'm wrong) However, here's what I don't get: 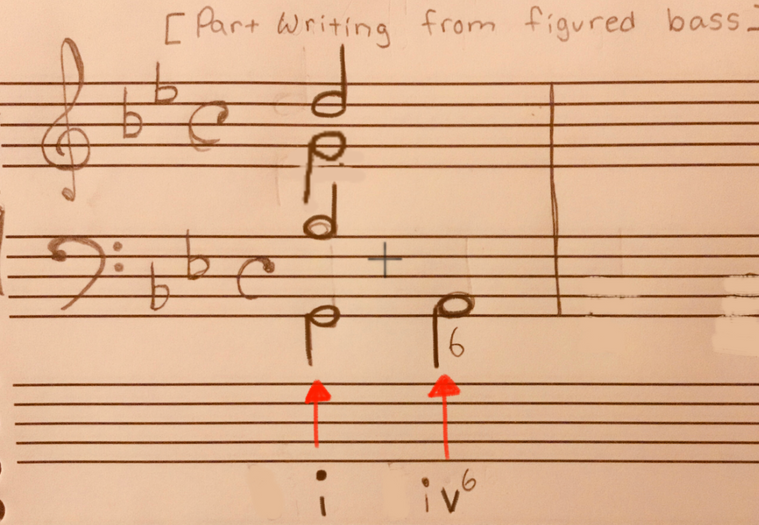 Are the roman numerals that I've wrote correct for the given bass? The key is in G minor. And the 2nd note is A. My first guess was writing ii diminished 6 because A is the 2nd scale degree on the key of G minor. But then I realized that a 1st inversion could mean that the A was inverted for that so therefore, it is F which is iv 6 (the one I wrote in the image). Which one is correct?

However, there are problems with your Roman numerals.

It's not clear what you're attempting to do here. Is it an exercise you've copied from a book? In that case, knowing the original exercise is necessary. Are you composing your own four-part exercise or composition? In that case, more detail is needed. For example, did you intend the Eb in your first chord?

Yes. 6 means the chord is in first inversion.

However,the first chord has an E note. Therefore, we cannot say that it is the 1st degree. The key seems to be B flat major. If we consider the key as B flat Major, then the first chord is IV(E G B D).That also needs to be in 1st inversion and Roman numerals need to be corrected to IV6.

The second chord(if it is in first inversion-according to your Roman Numeral notation), as the given note is an A, probably it should be an F major chord consisting of (F A C F). Here the Roman numeral needs to be corrected as V6.

4
Notating Augmented Chords
1
Determining quality of triad in F Major
2
Correct chord notation for inverted 7ths
4
What key is a piece in if an augmented chord is used as a dominant?
5
Can we use double accidentals in figured bass?
1
Confused on marking figured bass for modulating sequence
10
Before the advent of Roman-numeral analysis, did musicians conceptualize applied/secondary chords as somehow moving towards their temporary tonics?
1
Help with modulations identification: where they occur, and writing Roman numerals
4
In what context(s) is the Nashville Numbering System preferable to Roman numerals?