This is not about "identifiying a chord". The chord is already identified. This is about how a chord can be replaced with another, changing the flavor of a song.

I have played the rythm guitar on an amateur band and we performed "Sweet child o'mine" from time to time.

One point of debate inside the band, was the fourth chord in the main solo (Emin/Cmaj/Bmaj7/Amin). I'll not ask "what is the chord??" But take the following as background:

The most musically studied guy in our band, was the bassist. According to his theory, it has to be a minor. More or less on the same line of the following analysis: https://www.guitarmusictheory.com/sweet-child-o-mine-guitar-solos/

I have seen a lot of partitures for this song. Some captures of the discussed part:

So, according to "some" theory, it is a minor. Period.

But despite all the previous theory, my ear is liying me and telling it is a major. Well, it is a power chord for most of the time. Why my ear is filling it with the major third?

I have also analyse some of the solo fragments of that beat in partitures. It mostly avoids the 3rd interval, but it plays the minor in very quick parts. 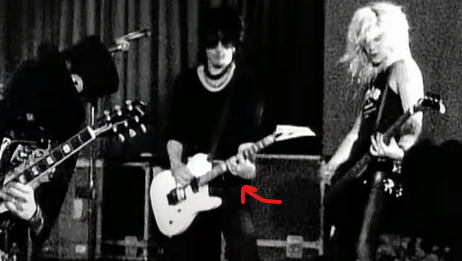 Seems like D chord transposed to the 7th freet.

My question is not to ask for the "real" chord here. It is more or less clear that it will work with major or minor.

I want to understand, instead, what is the theory, if any, that could explain that the rythm plays major third but the solo uses the minor?

And sorry for the lengthy introduction. I just tried to put all the possible data.

Anyway, in the Blues tradition, parallel minor mode notes are used against major triads. That's how it is. For instance, a tune using A, D, E chords supports soloing using A minor pentatonic as well as A major pentatonic, as well as various ways of shifting between the two.

The superimposition of the minor pentatonic, major pentatonic and tritone (relative to the root) is known as the Blues scale.

There are situations in which the major-based intervals don't work that well against minor chords. A Blues tune using Am, Dm, E7 doesn't support A major pentatonic improvisation quite as well as vice versa: how well as A7, D7, E7 supports A minor pentatonic.

Now in this solo, firstly, everything is played half a step relative to the notation. Let's stick with how it's notated, though.

The solo is in E minor, and is using elements oftt minor, with the C, B7 dominant and the use of related notes in the solo.

Then in the next section, where the A-something chord in question occurs, the solo is not implicating any minor third against the A root at that point. It's not using the C#. Your tablature shows a bend down toward the 15th fret D. (What I'm hearing in the actual recording is that it's not actually a full bend; it's more than a semitone, but less than a full tone. I slowed it down to 0.25 and repeated it a few times while playing the same thing, just to be sure.)

An A major chord at this spot would possibly implicate a shift into the E Dorian.

But D note which is the target of the bend, occurs in both the E natural minor (and the E minor pentatonic), and it occurs in E Dorian.

So in the case of that section of that solo, that is the simplest explanation why either an Am or A chord could work. They scales implicated by these choices both include the D.

For what it's worth, I seem to be hearing an Am chord. There are multiple rhythm tracks overlaid, and two strums are heard. The first strum is emphasizing the root and fifth, and then the second strum chimes in the higher notes. I seem to hear the second strum as minor, particularly if I listen to just the right channel.

I have another hypothesis why someone might like an A chord there. In addition to that being compatible with Blues-based soloing using notes from E Dorian, that chord would also be compatible with the melodic E minor. Some of the preceding melody is such that your ear may be gravitating toward an expectation of a melodic minor improvisation. The key note which distinguishes harmonic from melodic, or natural from Dorian, is avoided, leaving that ambiguity.

When you're listening to a minor key melody which uses the leading tone against a V7 chord and all that, but avoids the sixth degree (so there is a harmonic/melodic ambiguity) you can hear melodic into it.

A minor third played against a major chord is called a "blue" note. The same thing can be done with the fifth as well.

Both are idiomatic to blues, jazz, and pop/rock.

Not the answer you're looking for? Browse other questions tagged chords scales intervals or ask your own question.

3
Chord Type 7th Extension and the Major Scale
2
Which blues scale and 7th chord voicings match up?
2
How to build a chorus, what should i been looking for?
0
Being limited to the natural minor/major, relative minor/major and parallel key
5
Minor Key (and other key?) Roman Numeral Analysis
0
How do I know what note is #11 in my Fmaj9#11 chord