Is there a way of actually opening hairpins in LilyPond?

I need this for an Ossia staff that only appears for a single bar, like this: 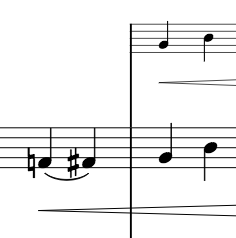 The real hairpin starts before that bar (like the 2nd one), but spanning the hairpin where the lower one starts doesn't look accurate, and there's the barline midways.

I know that it can be done with a white box in a markup, but I want to see first if anything like moving the starting points of the hairpin lines can be done, before I try rewriting some things for the Ossia staff.

Also, is there a way to put a text to the side of the Ossia staff that says "Ossia" just like an instrumentName but not where the instrumentName appears?

I recommend starting the ossia one measure earlier.

As an example, here is an ossia from Liszt, Hungarian Rhapsody No. 2 (S.244/2), mm. 378-379 (Peter Raabe Musikalische Werke edition). Note that the first ossia measure is identical to the "primary" notation. 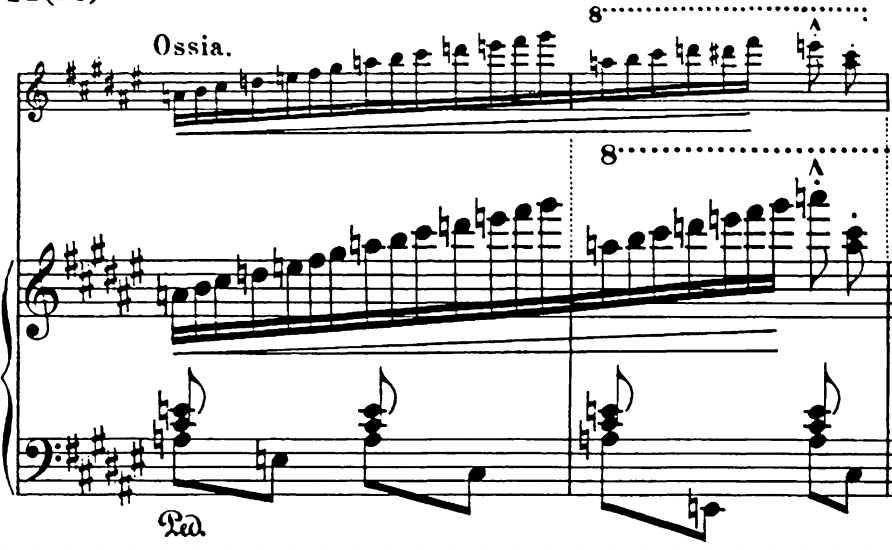 Alternatively, use "cresc." and a dotted line, if feasible. You can place the ossia "cresc." in parentheses to make clear it's not a new instruction.

You can use this code to place the text, adjusting the offsets as needed.

Code courtesy of the accepted answer to Lilypond: How to create an ossia Staff above a PianoStaff?

Not the answer you're looking for? Browse other questions tagged notation sheet-music software lilypond engraving or ask your own question.

3
Lilypond: How to create an ossia Staff above a PianoStaff?

11
Top-aligning scores inside Lilypond \markup blocks
1
Is there a way to notate alternative transitions between 2 sections of music?
8
Lilypond staffs extend past end of music
2
Aligning cross-staff stems when the same pitch is involved with Lilypond
2
Attach sustainOn/Off to notes that change between staffs
5
Is there a way to use LilyPond with Visual Studio Code?
10
How do I write hairpins and dynamics between staves in LilyPond?
2
Include an inline time signature in Lilypond \markup block?