How to calculate notes beats and properly draw notes beams?

I am fairly new to music theory and i find these 2 topics related but not explained in depth in...pretty much every resource i have found.

This example shows what i mean about the arbitrary beam location:

If possible i would like easy-to-understand answers to this topic, that do not use much musical jargon as i would not understand overly-technical answers with my currently limited music theory knowledge.

Wow, thanks for a well-documented and clear question!

You calculated correctly that the example adds up to 2 beats. However, it normally wouldn't be as challenging as that example, since it breaks a convention of beaming: Beams are normally organized to avoid connecting across beats, making it easier to see beats as groups at a glance. What if you had this:

... It's hard to tell at a glance which notes belong to the first beat and which to the second. It ought, properly, to be beamed like this:

... making it much easier to see the beats.

To beam your example properly: The dotted quaver "overflows" beat 1; all there's room for in the beat is a quaver. So the dotted quaver should be split up into a quaver tied to a semiquaver (since the pitch is the same, it will sound as one note):

To the second part of your question, about the direction of beams: The central point is that beams connect notes. The example you give is complicated somewhat by the dotted semiquaver followed by a demisemiquaver.

If the dotted semiquaver were split up, it would yield a semiquaver plus a demisemiquaver:

... and that's why the partial beam of the B demisemiquaver, in the dotted example, points left: it "belongs" to the other demisemiquaver contained within the dotted semiquaver. (See this earlier question, or rather its answer; the question is rather confusing.)

Your first question is partially correctly answered. The only issue is that you should consider note values as relations to the reference meter, not only the beat.

For instance, while technically a quaver is a quarter of a beat (in an x/4 meter where x is between 1 and 4), you also have to remember that there are meters that have different layouts; for instance, the compound meter of 6/4 considers 2 subdivisions of 3 "sub-beats", but it's also commonly considered as a 2-beats based meter (similarly to 6/8). So, one could say that a semiquaver, in that case, is not a quarter of a beat, but a 12th.

A very important thing to remember in rhythmic notation (and music in general) is that it's all relative.

Regarding your second question, these are some rules to keep in mind:

Considering the above, this is not completely unusual, and it has the benefit of clearly showing the quaver grouping within the beat:

Finally, consider that what you're asking is about very rare and specific situations. Your first image and the first example related to the second questions are generally considered as bad notation practice.
Remember that the first rule of notation is to ensure the score can be read as much easily as it's possible: the performer should focus on making music, not decypher how it's written. Beams (and groups) should always help the musicians, not distract them.[2]

In both cases, you have notes grouped along more than one beat (or grouped subdivision), which makes them really awkward.

Here are better versions of them: 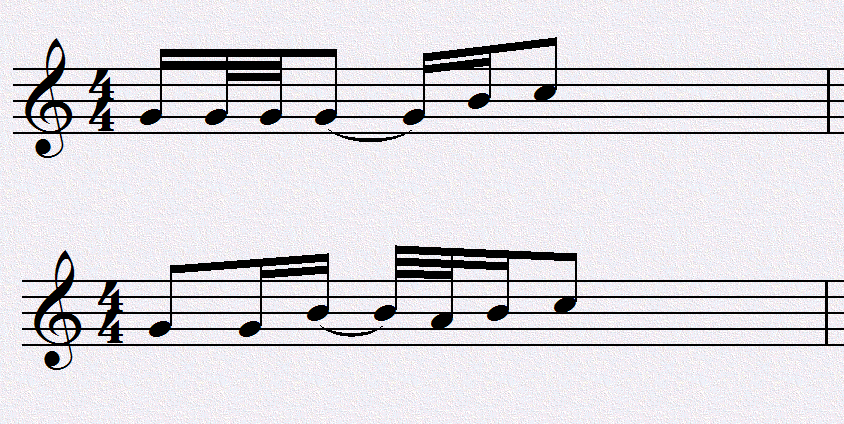 While they might seem more complex than your examples, they're actually much more readable and understandable, since the hierarchy of beats and durations is much more clear: the musician can clearly see where (and when) one beat ends and the other starts.

[1] I've seen very special situations for double-sided broken beams, but that's generally a very odd case for very odd notations that cannot be considered as standard.
[2] obviously, the first real rule is music theory, so you could get properly written sheet music that's still hard to read for some reason (consider cases with lots of double sharps or flats), but, as with any rule, there are exceptions; for instance, sheet music for harp sometimes ignores harmonic rules, as the technical "limitations" of the instrument suggest that it's better to write an enharmonic note that properly indicates the string to play instead of the harmonically correct note; for percussion instruments, you can get "pointless" durations (you'll get the same sound and sustain from a snare drum hit, no matter if you write a crotchet, a quaver or a demisemiquaver), but specifying them is actually nonsensical most of the times.

Just an idea, fuse pairs of notes with same duration next to eachother mentally so they become a note with one flag less, split the ones with dots so there is another note next to it with one more flag and then continue fusing. Is a bit more intuitive than bringing out calculator. (You might need to go dots first, then do the ones with the most flags bottom up, not sure).

Not the answer you're looking for? Browse other questions tagged theory notation rhythm beaming or ask your own question.

5
How should 3 notes joined with 1 beam line drawn on 5-staff-line?
4
Why do these notes have two sets of beams?
9
Reinforcing meter when dealing with alternating 1/8 and 1/16 notes and rests
3
Strong and weak beats in 4/4 time, when the notes aren't quarter-notes
4
How do I draw ghost notes in ABC notation?
0
How do you "think of" notes in groups which consist of a sequence of repeating notes which are in separate beams?
5
How to represent beams broken with rests in lilypond
6
Beams broken/unbroken with rests - meaning and usage