Can an arpeggio be multiple chords?

Or is an arpeggio considered to only be the notes of one chord (per the definition)?

If I arpeggiate a chord into another chord is that called an arpeggio chord progression or just an arpeggio?

You can play a sequence of chords all as arpeggios. A rather famous popular example is the string synth sound in the chorus of "Comfortably Numb" by Pink Floyd. Another set of famous examples is electric guitar tapping like "Eruption" by Van Halen. Those really fast tapped phrases are just sequences of arpeggios.

I've never heard the term "arpeggio chord progression" before. Normally I would describe something like this as, "It's the same four chords, but they are all arpeggiated" or something like that.

There are situations where what looks like a single arpeggiation turns out to blend from one harmony into the next. An example is given by m. 11-12 and m. 13-14 of Debussy's Rêverie (the excerpt below is m. 13-14 taken from IMSLP; m. 11-12 are the same): 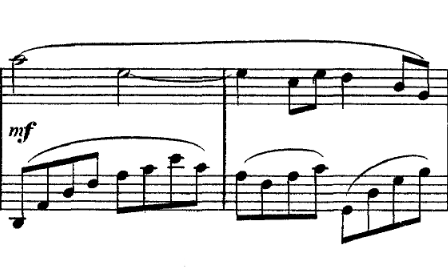 This part of the piece has one flat, and takes place in an ambiguous key area between F major and d minor. Because of the prominence of the d minor chord in this passage I will analyse it in d minor, although the overall key is F major (and the opening passage just cadenced on F major).

The first beat of m. 11 is a i, and this reading works well until the A in the third beat. However, the C and especially the E throw this off balance, and it seems more likely that the second half of the measure is to be read as a v. The first half of the next measure doesn't help clarify much, and the ambiguity is finally resolved in the second half of that measure when a stable iv arrives, resolving plagally to i again on the next downbeat (or to C major the second time it occurs).

This example indicates that the same contour can contain multiple different harmonic functions, which is not at all unusual (especially in the impressionistic style).

Whether or not the figure in m. 11 is an arpeggio or a combination of two arpeggi is probably a matter of taste. Etymologically, arpeggio comes from arpeggiare, which means to play something on a harp. Therefore, one could argue that the entire bass line of these two measures is an arpeggio. The slurring in this passage would agree with such a reading.

Alternatively, one can use a more textbook definition where an arpeggio is by definition a way of playing a chord, so that one arpeggio cannot contain multiple harmonies. I don't know if there is consensus on this, but I imagine most people would use this definition.

Generally speaking, an arpeggio is one chord, but of course that chord could be a complex one including far more notes than a standard triad. If you arpeggiate one chord into a second chord you could regard it as two arpeggios or simply an arpeggiated figure.

In that case, you could say you are arpeggiating a chord progression. The notes played over each chord would be its own arpeggio.

When I finger pick on my acoustic guitar, I'm arpeggiating chords in a progression, however when I discuss arpeggios with other musicians, I'm talking about single chords. I suppose that's why I've never heard the term "arpeggio chord progression". Even so, it makes perfect sense.

You are seeking a description for a series of notes, from two chords, played sequentially, as opposed to simultaneously. Here are three choices:

An arpeggio, without sounding too strict, is a broken chord. So, if there is a harmony, and notes from that chord are being played, that is an arpeggio. Then when the harmony changes, you are playing notes from the new chord, I would say you are playing an "arpeggiated chord progression". If there is something more complex going on, like the harmony changes, and you are trailing through the final notes of the previous arpeggio, I would not use a general terminology like "arpeggiated chord progression" to describe that because the texture is layered in a way that could be better described - but maybe not in so few words.