What is Chris Potter playing here?

NB: This is all in Tenor Sax key (Bb), not Concert

I've been mulling over the following excerpt of a Chris Potter solo on the tune "Just One Of Those Things," I find it probably the most harmonically and melodically puzzling part of the solo. I'm trying to figure out if there might be some underlying logic for the particular section of this solo (1:56 - 2:04 in the attached video) bracketed in red here:

I've done a little analysis on it as well: 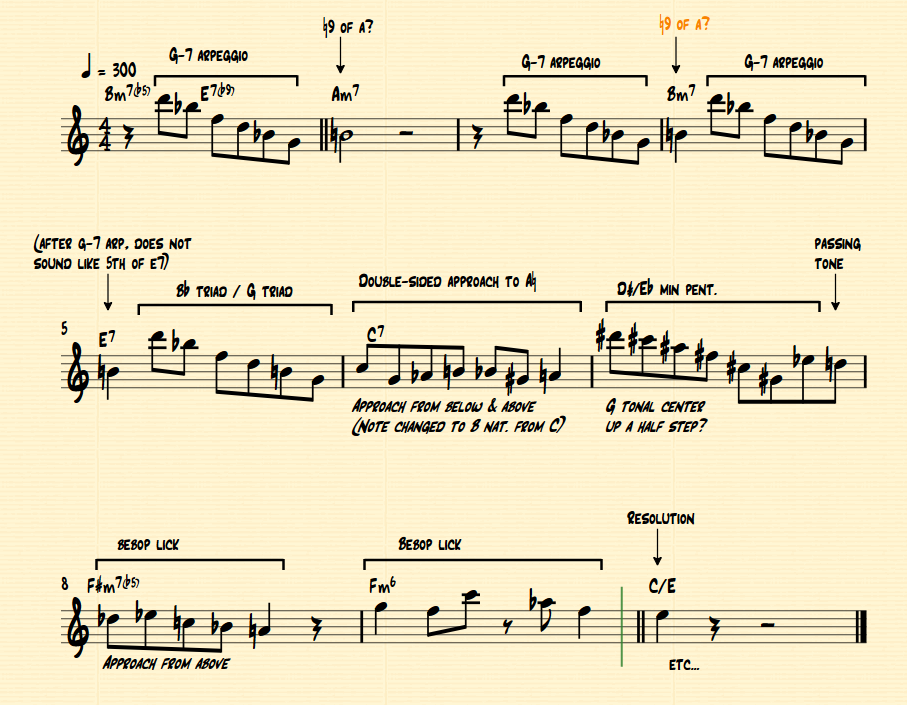 (The reason for the note about the "G Tonal center moved up" is because it is hard not to notice the similarity to the G-7 arpeggios preceding it; it's pretty fascinating how well-balanced of a phrase it is)

The Question: He seems to be emphasizing the B naturals, then targeting A natural twice, using fairly complicated ways to get to the A. I'm hearing this as a strange way to "target" the key of Bb, notably because he starts with a G-7 arppegio (i.e., the relative minor), hits Bb's flat 9 (i.e., B), and then uses great embellishment to get to A twice (the leading tone) - the second time he targets A it seems to come from an F7 sound; and easily the most striking sonority in this excerpt (possibly in the entire solo) is the way he kind of drop-kicks in with the D# minor pentatonic (i.e., Eb minor pentatonic, the iv chord of Bb) which leads into the F7-ish sound where the F#-7b5 is. Obviously he then resolves the F minor sound to the C major sound (i.e., iv -> I), which seems to give more credibility to the F7-ish sound (i.e., F7 which turns into F-7). This would mean that we are getting a kind of Bb-ish sound, to F minor to C major. Does this sound legitimate, or am I reading too far into this? Does anyone hear something different going on? This has been bothering me for a few days, so any input or corrections would be fantastic.

Potter is making three primary changes/adjustments to the chords:

This is how I would annotate his solo:

In the first 4 measurements of the A section, he is changing the ii-V / V-i resolutions:

Similarly, in m. 6 of the A section, Potter replaces C7 with F♯6. This is another tritone substitution. (Think of it this way instead of E♭ min pentatonic.)

In m. 7 of the A section, we reach the F♯ø7 chord. This chord actually has a diminished function because it serves as a passing chord to Fmin, the iv chord. (The scenario here is identical to m. 9-10 of Night and Day.) The lick Potter plays is F♯ half-whole diminished, and so he's probably thinking of this measure as F♯o rather than F♯ø7.

Reharmonizing a ii-V-i or V-i on the spot is pretty common in jazz soloing, especially at Chris Potter's level and especially at such high tempos. In fact, arrangers will even disagree over where certain ii-V's go and how long each chord should lasts. If you look up chord charts for Days of Wine and Roses, the same exact arranger has published two different sets of chords for measures 12-14:

So the placement of ii-V's, V-i's, etc. can changed for purposes of reharmonizing and is often more flexible than the ink on the page might suggest.

I don't see it as a targeting of the key of Bb because i don't see any attraction torwards Bb. I think it targets C.

He doesn't seem to be playing in a 1:1 relation with the chords. (I'm not sure if there is a term for it).

In 1:34 (bar 117) you can hear he playing a sequence of an C+ over Am7 and Bm7 then E7. While this C+ sequence does not relate (in the traditional sense) to Am7 and Bm it does relate to the key of C and more interestingly relates to E7 (which he just heard leading to Am7 in bar 118 and is usual in the key of C as dominant for the parallel tonic) because it have the root, M3 and m6 of E7.

In bar 82 you can hear him playing a sequence targeting A which indeed comes in bar 85. Of course you can analyze every note in relation to the C#º7 Dm7 Bm7(b5) and E7 chords but i would that he was playing thinking in changes of every single chord (especially at that tempo!)

In 1:47 you can hear him playing Am over E7. That doesn't make any tonal sense in the traditional ways.

For that Am7 Bm7 E7 C he just seemed to be targeting Am (but then came the parallel C). So, again, he knew where he was going and probably where the guitar was likely to be going and aimed to get there. But each one gone through different ways. And maybe this is what they wanted. A lot of "wrong" notes that gives color to the flow of the music but "right" notes at some key points. That is not even a totally new idea as in medieval counterpoint you can see a "stream" of intervals in the middle of a phrase just to end in a perfect fifth or perfect octave.

So about the passage in question i think he just played, like before, with some target in mind (C in the case) and added repetition some places because that contributes to compreehension.

Playing Gm7 with C as destination seems intelligent because Gm7 has a lot of common notes in the key of C. The only note not belonging to C major is the Bb. And the Bb over C makes a C7 that might not even sound like a dominant of F - instead might just be some color of C. In that particular case you can think of it of a dominant for the Fm6 (With F#m(b5) being a chromatic aproximation of Fm6). Also he ends that Gm7 arpeggio with a B natural which is just closer to the key C than Bb and conveniently is a note that works with E7 and Am. It's also, of course, the leading tone for C.

Since that Am7 Bm7 E7 C7 F#m7(b5) Fm6 C progression appears repeatedly it must be part of the underlying harmonic structure they must be improvising on (ie: they might change it in "real-time" but that's the base for the changes) so he should know which target notes work for that part.

Not the answer you're looking for? Browse other questions tagged jazz improvisation analysis transcription or ask your own question.

6
What is the approach taken by Bill Frisell to improvisation in jazz music?
7
Is this an error in Guaraldi's Christmas Time is Here?
6
What to Play Over a Dominant 7#11?
9
Can anyone precisely describe what it means (or feels like) to play exactly what your “inner ear” is hearing?
1
How would these chords from “Christmas Time Is Here” be analyzed?
22
Making Sense of Blues Soloing; differentiating major/minor pentatonics
6
Four part writing problem: tripled root solution. what is best practice here?
2
Improvising: can't play what I hear (internally)