Can violins change notes in the middle of a double stop?

I am arranging Mozart's Piano Sonata for a string trio, because, when I listen to it, I hear 3 voices, with the bass voice in the Alberti bass being the first note and the lower melodic voice as being the other 3 notes of the Alberti bass. I reached a conundrum, it seems to require that the upper note of the violin move while sustaining the lower note in a double stop. Here is what is in that bar, as dictated by the melodic voice:

Now, I have never heard a violinist sustain one of the notes of a double stop while moving the other note. Usually, they break the double stop there.

I am wondering though, is such a thing possible? Or should I give the D to the viola, where the violist would just have to stop the sustain of the D? Or should I just have the D rearticulated by the violin, even though Mozart wrote it as a single quarter note with 2 eighths above it?

It's even possible to detach notes in one voice of a double stop while continuing a note in the other voice, using a rocking movement of the bow. Cf the Andante in Bach's solo violin sonata 2 with repeated detached notes in the lower voice while a sustained note is sometimes held explicitly in the upper voice.

However, that kind of technique tends to be reserved to solo violin performances as it takes a lot of practice. However, the passage you quote is trivial in first position with regard to double stops. You should not expect the tricky detached technique Bach calls for in something intended for a trio, so you should place a slur over the eighths regardless of whether the piano version has them.

As long as the strings to be played are next to each other, there's no reason for notes to not change smoothly during a double stop.

In your example, you would have the 3rd finger on the A string and your 1st and 2nd fingers on the E, and would lift the 2nd finger to change to F.

Here's an example of double stops changing in Bach: 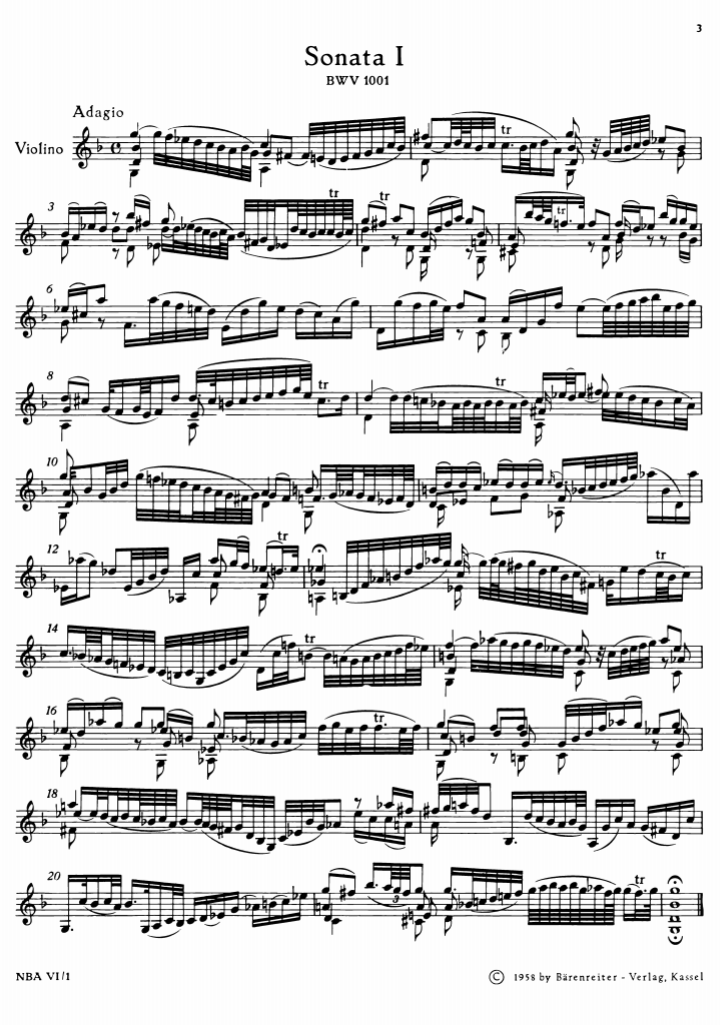 Not the answer you're looking for? Browse other questions tagged technique violin arranging mozart or ask your own question.

7
Double stopping pizzicato on the violin
4
Violin: How to change left hand position without hearing the change?
3
Limitations of String Instruments
0
Converting midi composition into orcherstral arrangement
1
Advice on arranging piano music for wind quartet?
2
Is this double stop playable on violin?
2
How to represent the staccato in the piano score?
2
Arranging K 545 for a string quartet, how to write the harmony part
9
Is it called a double stop if you play the same note on two different strings?