Are intervals the same as chords?

So are harmonic intervals the same as chords? I understand that an interval is the difference between two notes (pitches?), and to get them you have to play these two notes simultaneously. Isn't that the same as a chord?

They are not the same, but they are deeply linked. Think of a card game like poker.

In short, an interval is a measurement of distance between two things, and a chord is a collection of those things (those things being musical notes in this case). Using people, an interval would be like the difference in height between two persons, and a chord would be like a group of persons (a classroom, a convention, a friend gathering, whatever).

So no, they aren't the same thing. We can dive deeper into why and how.

An interval is the distance between two notes. The interval can be melodic (one note is played after the other) or harmonic (both notes are played at the same time). So, an interval is relevant to both scales (melodic) and chords (harmonic).

Can two notes be a chord?

Ottó Károlyi writes that, "Two or more notes sounded simultaneously are known as a chord," though, since instances of any given note in different octaves may be taken as the same note, it is more precise for the purposes of analysis to speak of distinct pitch classes. Furthermore, as three notes are needed to define any common chord, three is often taken as the minimum number of notes that form a definite chord. Hence, Andrew Surmani states, "When three or more notes are sounded together, the combination is called a chord." George T. Jones agrees: "Two tones sounding together are usually termed an interval, while three or more tones are called a chord."

Are intervals the same as chords?

No. They are not the same.

The diatonic scales are composed of a sequence minor and major seconds (harmonic minor has one augmented second).

If we define a chord as two or more notes played at the same time, then an interval when played harmonically can "be" a chord, but that's just because you are using the smallest building block available.

An interval is just the difference or distance between two pitches.

Wikipedia differentiates between "harmonic" and "melodic" intervals. If the two notes are played simultaneously, it's a harmonic interval, but if they're played sequentially, it's a melodic interval.

A chord on the other hand consists of a number of notes (how many, opinions differ, but at least more than one note), and each pair of notes is within some distance i.e. interval from each other. 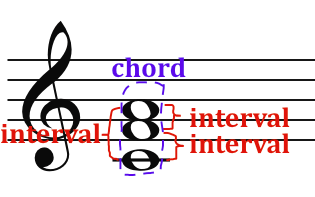 A three-note chord has three intervals.

A great question which needs answers!

No, they're not the same. Intervals are not chords, and chords are not intervals.

They do, however, have a sort of relationship, but it can get confusing - hence the question!

An interval - any interval - is defined as the space between two notes. It also needs the names of those two notes to be classified. To clarify - an inteval that sounds like m3 could well be. If the notes named are C and E♭, then yes it is m3. But C and D♯ sound the same. As do B♯ and E♭, but those are given different names, and fulfil different functions. As such, any given two notes, sounding an 'interval', may have the same sounding interval, but different names. Like C>E♭ - a minor third. And, in 12tet, C>D♯ - an augmented second. Their sound together is identical, but the function they work in is very different, and, they won't look the same on the stave. They will, however, sound exactly the same. Every interval between two notes has this 'problem' - diminished 5th and augmented 4th as another example.

A chord - to most people - contains two or more intervals. Those between the first/second notes, and between second/third notes. There will be as many intervals as the number of notes minus one. (Moving sequentially from each note to the next one up). I'm not getting embroiled in 'two notes makes a chord' here - for now, two notes makes an interval.

So, taking a three note chord - a humble major chord - we start at the lowest note. Call it C. Going up (intervals are calculated from the lower note up) there's a major 3rd to the next note - E - and a perfect 5th from that same C to G. Thus CEG constitutes a C major chord (in root position).

Confusion awaits, though, as if we examine that chord interval-wise in a different way, it gets odd. C >E is M3. But - E>G is m3! We now have a major chord with a minor 3rd in it. Move things about, and Cm could be construed as having m3 (C>E♭) with a M3 above (E♭>G). Bear in mind that in both, C>G is P5. Maybe this is where OP is mixed up?

So, to sum up. An interval is the distance between two given named notes. A chord is three or more notes played simultaneously, and the relationship between those notes is quantifiable by use of interval names.

A chord contains 2 or more intervals. The intervals can be related to the root note of the chord, to the Bass note or to any other tone of the chord.

We can say a C maj7 is built by a major third a perfect fifth and a major seventh or we can say it contains 3 thirds (major,minor, major) whereby the highest note is a minor second lower than the octave. So it would be quite confusing to use the terms identically.

(Btw.:it is already confusing enough that we count the lower and the higher notes too when naming the "interval", what means that the definition Interval = the difference between 2 tones is actually not all correct.)

For melodic intervals this question doesn't play a role.

So are harmonic intervals the same as chords?

One point we have to consider:

We use the same names of the intervals for the degrees and these terms are also meaning the triads and other chords on a certain degree:

So if we say: the fifth of the of C is G we spell it the same way and we also mean the fifth as interval and the fifth as degree that is the dominant chord of C.

This will lead to some confusion for beginners and your question is quite legitimated and understandable.

10
I need help to understand chord intervals (not single note intervals)
13
Why are two pitches considered a chord?
3
Naming Intervals — Tactics, Strategies, Tricks
16
“The intervals considered dissonant have changed since the 'Middle Ages'”; How so?
0
Explaining DADA to EGBG (and in the other direction) in theoretical terms
21
Which are all the musical intervals that are valid?
1
Using intervals to build chords
0
Are melodic intervals in relation to key or simply the last played notes?