Is there a theoretical explanation for a change of a major7 to minor7 of the same root in jazz?

Is there a theoretical explanation to this type of change and when should it be applied?

This happens very often in a major key with the IV chord, which is altered to the minor chord with the same root (iv), and then resolves to the tonic chord. This works so well because of the voice leading. E.g., in C major you would get F to Fm to C, where the note A (third of F) moves down to the Ab (third of Fm) resolving to G (fifth of C).

The iv chord in a major key is often called a borrowed chord, because it can be viewed as borrowed from the parallel minor key (i.e., the minor key with the same root). This borrowing is part of a broader concept called modal interchange.

In the song Misty, if played in Eb major, the Ab maj7 chord is the IV chord, and the resolution back to Eb maj7 is as described above, just that there's usually a Db7 (bVII) chord in between the Abm7 and the tonic chord. That Db7 has the same function as the iv chord, because it is basically the same as an Abm6 chord, just with a different root.

This is not a chord substitution but could be a cadence or a key change. As mentioned in other answers a very common device (found in other forms of music not just Jazz) is

Moving away from your example for a moment it is quite common to replace any chord in the circle progression with its dom 7th to move to the next chord in the progression (with the exception of the IV as that moves to the viii).

This created the sound and feel of a resolution to the next chord in the sequence.

This isn’t something that theory ‘commands’ you to do, in the way that a dominant expects to resolve to a tonic. It's not following some rule. It’s just a thing you CAN do, and not a particularly ‘outside’ one. Same root, different flavour of chord. A unifying factor and a variation. Happens all the time in music. Repetition, imitation, variation.

'Misty' is based on two types of stock progression. There's the ii7 - V7 - I in bars 2-3 then again (aiming for a different temporary tonic but not actually getting there!) in bar 4. Then there's the standard 'cycle of 5ths' turnaround in 5-6 and 7-8.

ii7 - V7 - I is a very strong progression. You can jump to almost ANY m7 chord with the flimsiest of excuses and justify doing so by treating it as the beginning of such a progression. Modifying an existing chord is a pretty conservative way of setting off for somewhere exotic. 'Giant Steps' uses a rather more contrived method!

In the case of 'Misty' I can't see much point in calling it anything more complicated than 'modifying a chord'. Does 'Modal Interchange' tell you anything extra? 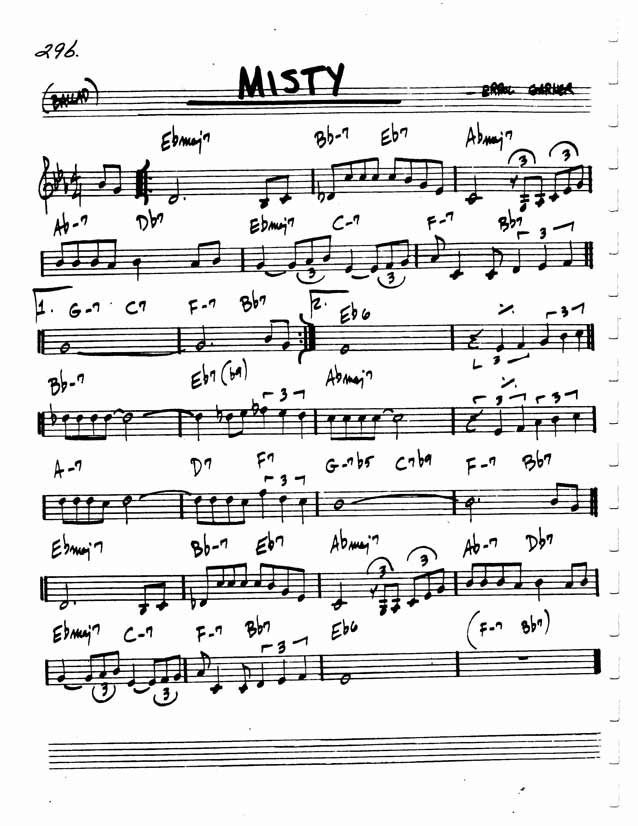 Here's another direction 'Misty' could have taken. Still ii7 - V7 - I, which is what gives it integrity with what's before. (I've carried on and 'taken it back home' but I didn't have to.) Not quite so obvious, which makes it... well what? 'Theory' can tell us it's a less obvious choice, but not that it's a worse one. (Since when was 'obvious' better?)

(And I'm sure you've noticed that 'Misty' DOES take very much this route in the middle 8!)

One place I've seen this done a lot in jazz harmony is in a pair of descending ii-V progressions (often in the bridge). As an example, E♭m7 A♭7 D♭maj7 D♭m7 G♭7 C♭maj7. There's a lot of ways to explain why this 'works', but the key is that the shift is primarily created to get from the first key, D♭ major, to the second, C♭ major. You could also call the whole progression a variation on iii VI ii V I in C♭ major.

The color shift one gets from that parallel transformation is a nice sound, and just as good a reason to use this chord sequence as any other. So most of the time I see that chord movement of major to minor on the same root, it's either the minor plagal sound (IV iv I), or it's the ii V down two semitones thing I explained above.

I think one of the classic sources for the sound is the B section of Cherokee..

Each of the four bar lines is a basic ii V I pattern, but it is sequenced down a full step four times.

The transition between each sequence is where the major to minor change happens. Like: ...BΔ7 | Bm7...

This song is supposed to be the one that Charlie Parker woodshedded on to develop his chops, so it seems like an important example to mention, and it happens this way in other songs.

Another common example is using a borrowed chord, a chord that comes from the parallel minor key. In I V IV iv | I the minor iv is "borrowed" from the parallel minor. In that case the theory is the borrowed chord maintains its function. So, both major IV and minor iv "function" as subdominants and the change of major to minor just adds chromatic color.

I put borrowed and function in quotes above, because some may prefer to explain the motion as a chromatic passing tone between the sixth and fifth scales degrees. I think that is a fine explanation too, and doesn't contradict the idea there is not a change of function.

Misty has this kind of "borrowed" progression, but it uses it in a specific way involving a bVII chord which has it's own special name: the backdoor progression: iv bVII I.

Compare the Misty borrowed chord explanation to the Cherokee sequential explanation. While the "function" of the two chords is the same in Misty in Cherokee the function changes. In Cherokee when getting to the BΔ7 the chord is a temporary tonic I in the pattern ii V I in C#m7 F#7 BΔ7, but then when it changes to Bm7 in the next sequence it becomes the supertonic chord ii of ii V I in Bm7 E7 AΔ7. In that case the two B chord not only change from major to minor but the function also changes.

If all this dithering about the use of "function" is a problem, you can look at it more plainly. In Misty when you look at the larger picture the opening section is an elaboration of movement between Eb and Bb (clearly I and V.) It starts on Eb and ends on Eb, that's the tonic. Regardless of the terminology used to describe the two major and minor Ab chords, one thing is clear: they aren't doing anything that changes the tonic of Eb. That's an "A" section establishing a tonic. The "B" section of Cherokee it totally different. It starts on C# and ends on F. It keeps moving and moving, transitioning back to Bb. It's a bridge returning to a tonic. Instead of talking about function we can describe them as two very different structural events.

The Abm7 chord is just doing the old jazz harmony trick, a temporary change between parallel minor and major tonalities. It can also be called a tonic shift of three semitones. Matt L. already gave an introduction to the subject of modal interchange, but to give a different perspective, I'll add a demonstration of what I feel the Abm7 chord is doing:

I think Laurence tries to say that if we take the question literally, the only "theoretical" explanation for why that was used must come from social sciences or psychology or something. Music theory can only describe the phenomena that happen in the harmonic context AFTER someone has decided to want to do that change. Why they did it - it was an artistic choice. They liked the feelings produced by the change, or at least they thought that prospective customers might like it. ;)

15
Importance of sight reading for non-professional jazz guitarists?
11
Is there any theory to decide a set of plausible chords per measure where a whole melody of a song is given?
13
Theory behind the change from a major chord to the same in minor
13
Best Way to "Learn" Jazz Piano
7
What is the most efficient way to memorize chord changes?
1
Tritone substitution in minor, just change the root or change the chord quality too?
9
Tritone substitution to a major chord?
2
Is there a music-theoretical language for directly expressing voice leading?
3
What is the music theoretical basis for this chord transition?