When does a jazz tune actually modulate?

I am getting into Jazz harmonic analysis, and have watched a few analysis videos to start me off. I will be referring to the analysis that one youtuber (Justinguitarsongs) has made of the tune 'Misty', by Erroll Garner. I have posted a photo of the song, with Roman numerals pertaining to the sections in question.

ii-V-I in A flat M. A flat M is also acting as the IV chord in E flat M. Despite its IV function, the Eflat7 is not described as a secondary dominant chord leading to IV (V7/IV). Is this because the ii-V-i cadence is seen as a key change?

Here, we have a ii V in F linking with a ii V in E flat. This time, the dominant chord IS described as a secondary dominant chord. Is this because the G-7 that precedes it is part of the key? (chord iii).

(for this one, justinguitar made a couple of alterations to the Real Book harmony, as he believed it to be a more accurate representation of the harmony- this can be seen in pencil (A-7-D7, C-7-F7, G-7- C7, F-7, Bflat7).

Here, we have a bunch of interlinking ii-V progressions. The first being in G, then B flat, then F, then E flat. Do these count as modulations, even though they are incomplete? The C-7- F7-G-7 can be seen as a back door progression in G minor, but the G minor itself is the ii chord in F, so it doesn't really 'arrive' in that key.

I also do not understand the relationship between the first two in this sequence (A-7 -D7-- C-7-F7)?

ii-V-I cadences: These are seen as modulations, even if the I chord is in key ( and as long as the ii chord isn't in key, otherwise the V is seen as a secondary dominant)?

interlinking ii-V cadences: these are not complete modulations until they resolve? (even arriving at i chord does not count as a modulation if it is also the ii chord of the next ii-V?) 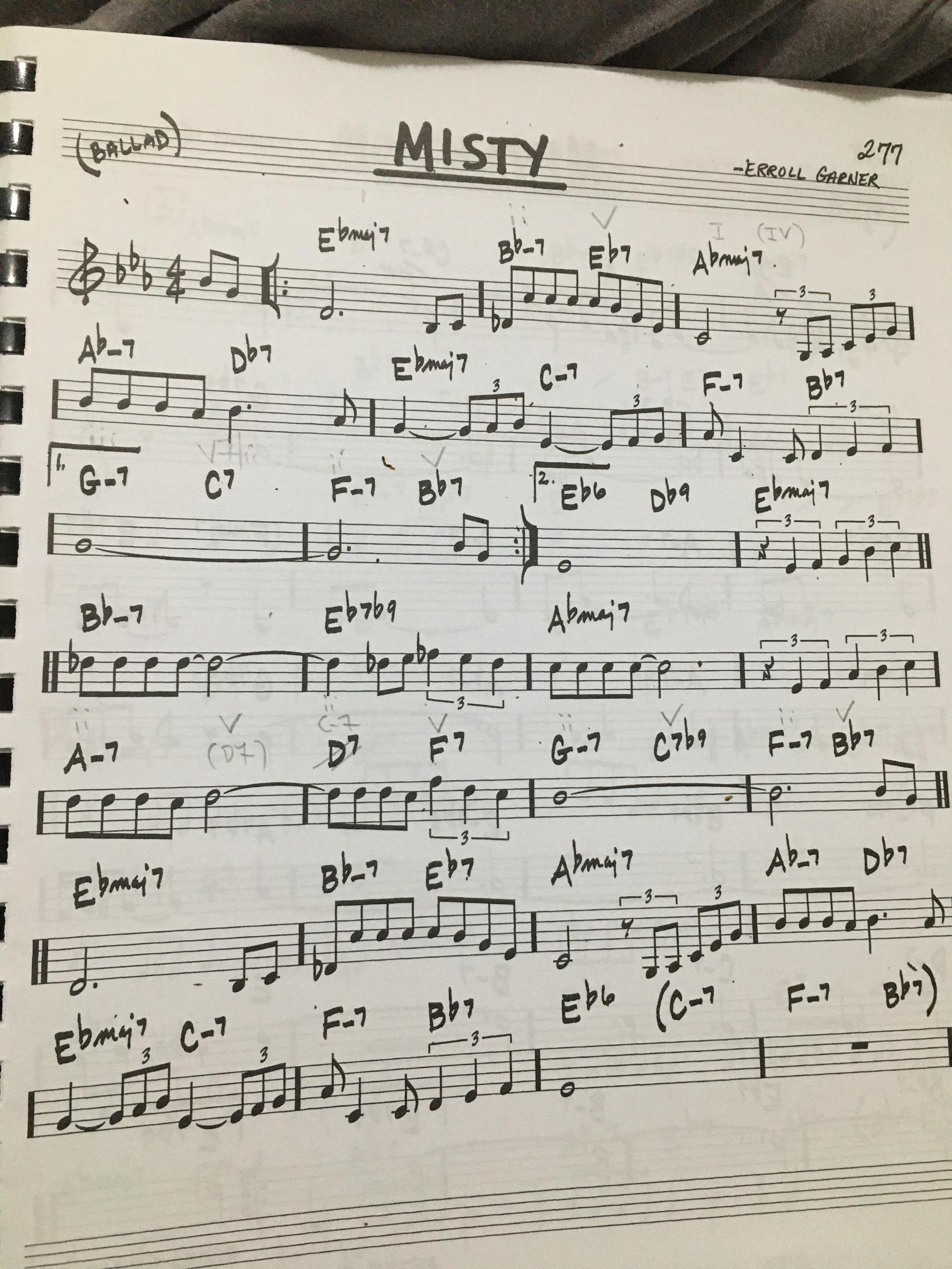 Many thanks for any time spent on this!

First, thanks for the great question and all the homework you put into the song before posting a question, we get way too many “can you analyze this song for me?” questions, which are off topic on this site.

In regards to your title question, analysis in general and when any song modulates in particular can be open to interpretation and discussion although sometimes it is clear cut. Now let’s get to it.

Bars 2-3 in my book are a secondary ii-V to the IV chord. The Eb7 is a dominant to Ab which makes this obvious. Jazz and pop harmony will often interject a ii chord along with a secondary dominant to have more harmonic motion. Some may call this a modulation but the Ab chord is brief and also functions in the key of Eb so there isn’t enough there to call it a modulation. I hear, I, ii/V/IV, IV.

In bars 7-8 the Gm7 is both the iii and part of a ii-V/ii so it’s a toss up. You wouldn’t be wrong to all it either or. To me it functions as both.

Bars 13-16 (or 15-18 if you’re counting from the top) unfortunately are wrong in the Real Book. They do not match with either Erroll Garner’s or Johnny Mathis’s versions. This is a pet peeve of mine because I have played this song on gigs hundreds of times and I have to tolerate hearing them played incorrectly 95% of the time.

Justin’s chords, based on the Mathis version are right for the the first two bars. The second two are actually Fm11 to Bb13b9, one bar each. Either way, these ii-V’s are not modulations. ii-V’s alone are not thought of as modulations since they never reach home base. To me the term “modulation” is overused. A passage has to go to a key, briefly or not, and establish itself melodically and harmonically as a new key to be considered a modulation. In jazz, sometimes ii-V’s do not resolve or have a delayed resolution or even sometimes no obvious harmonic function. I think of them as a “scenic route” back to the tonic.

Here is a sheet with 4 versions and my basic analysis, original Real Book, Justin, Mathis and Garner. Remember Garner wrote the song and his version is NOTHING like the first three, which have some similarities: 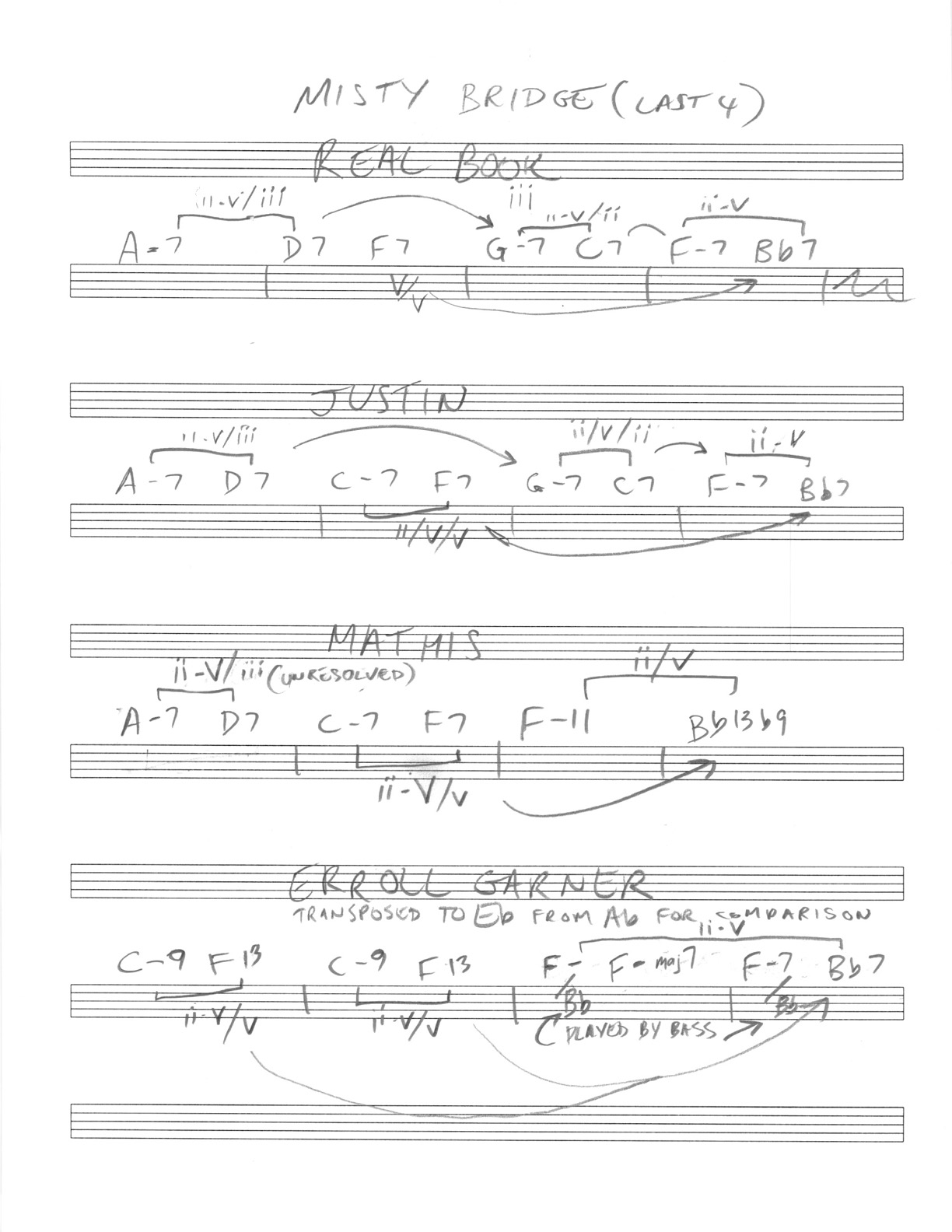 You can see the Garner version is very simple, just ii-V/V to ii-V/I. Everything beyond that is just a reharmonization done by arrangers. To me the Gm7 C7 in the third bar of the first two is what wrecks it. It kills the harmonic flow. It should be a ii chord with an 11th in the melody like it is in both the Mathis and Garner versions.

An unusual and beautiful tune. Unusual in that the basic key (Eb) barely has a chance to establish before we go off on a ii-V-I excursion to Ab, then on what could have been another one to Gb, diverted however home to the tonic. The rest of the section is standard 'cycle of 5ths'.

'Modulations' or 'temporary tonal centres'? Perhaps 'modulation' should be reserved for a change of centre that sticks around for more than one bar!

It's well-established in jazz harmony that a ii-V-I progression is so strong that you can use it to get just about anywhere. (Try!) The use here is pretty tame, sticking close to the home key. 'Giant Steps' takes it rather further!

The middle 8 starts with the same trick, a ii-V-I to Ab. Then an even more extended 'cycle of 5ths' journey home to E♭ extending right back to Am7-D7-Gm7-C7-Fm7-B♭-E♭! Leave that D7 right where it is - it's the F7 which is the interloper, dirtying up the nice clean cycle of 5ths as a - very pretty - chromatic alternative to the basic D7. (I'm not sure it's authentic, but it's still pretty!)

Don't forget it's a song, not just a chord sequence. The melodic imitation of 11-14 and 15-18 contribute a lot to it all hanging together.

Listen to Erroll Garner completely fail to appreciate what a beautiful tune he'd written - obscuring it with gratuitous filigree.

This version is sacrilege, but somehow it's hard to dislike it!

It is very common to modulate to the IV even in classical and renaissance music. Probably one of the most common devices in my experience. Don't focus on the chords as there are many choices that could be used to harmonize a song. Look at the melody and you will see an accidental in the second measure, specifically a b7 of the key signature. This is all it takes to move up a 4th in key. At the end of the day it doesn't matter how you harmonize it, the key change is there. Not all accidentals indicate a key change but this one is quite obvious, and you can hear it without the chords. If I see a #5 (and possibly #4 with it) I'm going to hear a modulation to the relative minor. Think of the E7 in the second bar of All of Me, that forces the ear to want to hear A (M or m). Then they land on A7 which makes you think D-, the next chord in the sequence. Jazz has a tendency to overuse strings of cycle extensions but that is what makes it sound cool. These devices are sometime inserted even when the melody does not indicate a key change.

Love this song! Played it for years - in key C on piano, but E♭ on guitar.

For what it's worth, I've never considered that this song modulates anywhere. It's solidly in E♭ (as writ), and when the first A♭ comes along, well, that's standard I>IV. Even when D♭ appears, that doesn't implicate a modulation to key A♭, it's just a re-harmonisation of A♭ minor - or VII if you like.

Modulation, to me, is a temporary key change. If that continues for more than a few bars, then it is a key change, but there's nowhere in Misty that feels like it's left E♭ for more than a bar or two. The middle eight moves towards A♭, but that's a common enough transition, coming back onto E♭ for the next verse. So, I believe there's no proper modulation going on here.

Not the answer you're looking for? Browse other questions tagged harmony jazz modulation or ask your own question.

3
How do I recognize notes in other key?

1
dissonances and non-key chords to build tension in chord progression
5
Ballades (Chopin) Harmony Question
3
Modulation from D major to D minor, should I go sudden or gradual?
1
Using an augmented chord to modulate to a distant key, will this work?
2
How to think about this moment from BWV 816
2
How is D7 functioning here? Applied chord both kind of does and doesn't fit
2
How to smoothly re-establish original tonality?
2
How to modulate decisively and finally between distant keys?
3
Jazz vs Classical interpretation of this V7c vs iv-m6 chord in a common chord progress?
3
Is there a historic origin for final ending (cadence) of V-I with melody tones ^3 ^1 in some jazz standards?