How many sounds should be played for this (tr) market note?

I used to play the top left note (see below) with a single C# key press of the assumed duration. Some listeners told me that the (tr) notation above indicates that a short sequence of sounds should be played instead, but when I asked, the two people have shown me slightly differently. Is it true at all? How many times do I need to press the C# piano key for this note? The meter is 2/4. 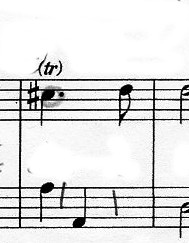 Well, there's a lot going on with trills. Like most ornaments their precise performance nature is down to stylistic choices and the preference of the performer, along with knowledge of the context in which the composer was expecting the piece to be performed.

Your specific except looks like it's approaching a cadence in D major (I'm assuming we've got treble clef on the top and bass clef underneath and no exotic key signature). I also note the trill instruction is in brackets, which often means it was inserted by the editor as a suggestion. This trill on the leading note idea is called a cadential trill and is often seen in baroque music.

I'd instinctively (but I am a baroque musician and upper note trills are our default) play this starting on the D, lingering for just a moment there before a fairly rapid trill between C# and D, finishing on the C# and then re-articulating that D quaver precisely on time to take the listener into the cadence. It's a classic perfect cadence, and we frequently add such trills without any markings being in the music because it's a common stylistic feature.

However, use your judgement. The editor's only suggested this, so you could leave it out if you wanted. Try both ways. Try starting on the main note. Try playing with how long you linger on the first note. Try accelerating through the trill (not the tempo of the music, but the speed of your trilling). Experiment with how you leave the trilled note and articulate the quaver D, and then the D which concludes the cadence. Try putting a turn on the end of the trill if you want, turned trills also feature before cadences sometimes. It might sound great! It might sound completely out of place.

You won't know until you try it.

I would just like to respectfully disagree with the other answer. A three note trill would be more in line with a mordant and that has its own marking.

A view points to consider when you interpret trills.

To play a trill marked on a note, one plays the note itself, then either the note one semitone or one tone above, then alternates quite quickly between them. There is no actual number that needs to be played, it depends on the length of time there is available, and how the player wants to play it. The trill could be just 3 notes, or, on a minim in slow time, lots. The main idea is to start with the written note, and play it again at the end of the trill, just before playing the next written note. It will also depend somewhat on the piece, and its era. Trills maybe came about in the harpsichord popularity time, when dynamics didn't happen on harpsichords, to allow more interest into pieces.

-1
What is the (tr) sign in sheet music and how to play it in the following example?

1
Is it fair to say the treble clef is optimized for piano?
6
Key-agnostic voicing-based notation (piano)
13
What does a mordent written to the left of a note mean?
7
How to clearly notate tuplets, both "simple" and "complex," in irregular meters
4
C Clef Showing Middle C on the Second Space: Printing Error, or Obscure Clef?
4
Time Signature Dilemma, should I change the time signature for my Scherzo?
4
What does tying an acciaccatura to the principal note with a slur imply?
2
Proper use of fermata marks on sheet music